Even as tribal communities' anti-Koel Karo agitation continues, there is confusion in official circles about the current status of the project 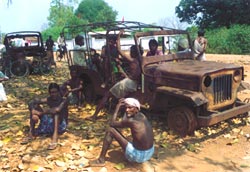 After 30 long years of virtual inaction by the powers that be and a violent struggle by local communities, the fate of the 710-megawatt (mw) Koel Karo hydroelectric project is sealed. Or so it seems, with sources in the National Hydroelectric Power Corporation (nhpc) claiming that the project -- which was to be sited on the rivers of south Koel and north Karo in present-day Jharkhand -- has been finally struck off the programme implementation department's list. The department is the monitoring agency under the Union ministry of statistics and programme implementation.

The ministry, on its part, goes only so far as to concede that the project has been "frozen" since the early 1990s with no expenditure being incurred on it. But even if this is true, the authorities have some explaining to do: why was blood spilt and lives lost in the police firing in Tapkara? And why then did the Jharkhand power minister call a meeting earlier this year to discuss the project with the Koel Karo Jan Sangathan (kkjs) -- the group that has been offering stiff resistance to the project -- and the people of 256 affected villages?

It transpires that these were not unintended consequences of mere maladministration but calculated political machinations. Why else would Jharkhand chief minister Babulal Marandi insist, on the one hand, that "the Koel Karo issue will be resolved in accordance with the wishes of the villagers", but on the other keep sitting on the one-point demand of the local people that the project be scrapped? Stephen Marandi, leader of the opposition in the state assembly, is convinced that the government actually wants to go ahead with the project. "Otherwise, would it keep things hanging this way?" he asks.
"The main issue here", feels I D Dayal, nhpc chief engineer at Torpa, "is that the state governments have failed to work with the people, to convince them about the benefits of the project and to give them proper rehabilitation packages."

As such, "government officials don't even know how many people have to be relocated", points out Ramesh Saran from the department of economics, Ranchi University. "Adequate displacement or compensation plans have not been made as no one wants to get involved in such complicated issues," laments Jharkhand Mukti Morcha leader Shibu Soren.

The villagers are also miffed at having been cold-shouldered by the authorities. "If they wanted development, they should have taken our opinion instead of thrusting this mega project upon us," says an indignant Rajen Gudia, president of kkjs. "What we need are irrigation and microhydel projects, apart from power generation units using organic waste," he adds.

No wonder it is alleged that the Koel Karo project was never meant for the poor. "How can it be, if they are going to uproot us all?" asks an angry Jilani Gudia (of Derang village), who lost one of her sons in the Tapkara firing incident. On February 2, 2001, the police opened fire on an unarmed gathering killing eight tribal people and injuring 36 others at Tapkara police station (see Down To Earth , Vol 10, No 19, February 28, 2002). The Indian People's Tribunal on Environment and Human Rights concluded that the incident was illegal and that the project be abandoned. Regarding the power minister's meeting, villagers firmly believe that it was planned "to coerce them into signing their own death warrant by saying yes to the project so that big players and contractors could make mega bucks".

The fact that the project involves big money is no secret. In 1980, the plan budget for the production of 710 mw of electricity was about Rs 445 crore. By 1998, the costs escalated to a whopping Rs 2,840 crore. This made electricity extremely expensive at a staggering Rs 6.45 per unit. Current estimates are a clear indicator of the non-viability of the project: if implemented now, it may cost as much as Rs 8,000 crore, which in turn will push up the power tariff to an astronomical Rs 12 per unit.

"The villagers aren't against development per se," says Mangda Gudia, a member of kkjs. "It is the way things are being done that irks us. Our struggle revolves around the issue of jal , jangal , jameen (water, forest and land) and our traditional rights." According to kkjs secretary Soma Munda, the Chhotanagpur Tenancy (cnt) Act empowers tribals and "if we go away from here, we will not get our khut-katti (traditional) rights." Meanwhile, the peoples' representatives -- one in parliament and another in the state assembly -- keep up the chorus: "People's demands will be fulfilled."


With politicians undecided and villagers adamant, not much has happened in the past three decades (see box: Turbulent times) except for the construction of a bridge on Karo river to haul supplies, and the setting up of a colony in Ranchi's Torpa block. The nhpc is now contemplating scrapping the project even after having spent Rs 50 crore on infrastructure because each passing day is only adding to the escalating costs.

The situation wasn't so bad till the late 1980s. "Our relationship with the people here was almost cordial," recalls Dayal. " nhpc had come up with a model village plan to be implemented by the state government and we had also decided to chip in for other housing schemes like the Indira Awas Yojana." However, be it the pre-Jharkhand Bihar government or the current dispensation in the fledgling state, neither has made a concerted effort to implement the project, reveal nhpc officials. "We are ready to wind up. The situation is hopeless," sums up an official of the corporation.


Another fallout from the stalemate is the utter neglect of the area, which has reduced it to one of the poorest in Ranchi. Basic infrastructure, including hospitals and schools, is conspicuous by its absence. No government official dares to venture into the region because of its notorious reputation of being hostile to anything linked with the authorities.

Initially, when the movement started in the 1970s with the kaam roko andolan (agitation to stall work), "we were not in favour of scrapping the project," says Soma Munda. The apprehensions set in when, in 1984-85, the government put forth rosy proposals of relocation and rehabilitation but did not deliver. This made the villagers rethink their stand on the project and, in the years to follow, they became completely opposed to it. In 1995, when the Bihar government invited the then prime minister, P V Narasimha Rao, to inaugurate the project without informing the villagers, "we lost our patience", says Soma Munda. Rao did not turn up, but the incident changed the face of the struggle. This move was all the more intriguing because the project had been put into cold storage at an earlier date.

Off the record, the authorities concede that the project is as good as terminated. But till they clear the air officially, a cloud of uncertainty will hang over the future of those affected by it.