Jhabua in Madhya Pradesh is a many-splendoured wonder where indomitable political will and the tribals have proved that the regeneration of the environment is possible, reports Richard Mahapatra 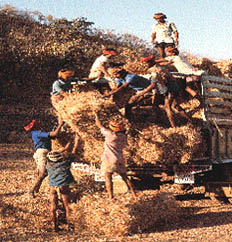 the tribals have gone to war. The quest: regeneration of the environment. The location Jhabua, an upland in western Madhya Pradesh (mp) with an area of 6,782 sq km and a forest cover of 624 sq km. Almost 80 per cent of this forest is severely degraded or has suffered the ill effects of bad management of natural resources.

Jhabua is a weapon in the political sheath of the chief minister, Digvijay Singh, who made the dream come true. Jhabua is a prime example which proves that if all the mad hatters in the political and administrative system get it into their minds to produce the perfect cup of tea they will eventually come up with the recipe of success that Jhabua is.

There are two types of residents among the villages of Jhabua district. Those who have seen the forest and the jungle and those who were migratory labour, till recently. Gula Ralu is well past his 80th year.He is the eldest amongst the members of the 105 families of Ambakudra village. He has seen the forest and he has seen it vanish. But he feels that of late there is change in the air. The women dress better and the men have stopped running to town in search of jobs. All this has happened in the last three years.

The village used to see 500 people migrating every year in search of work and the women were left to look after the livestock. Three acres of land which had earlier sustained Jadila Bai, her family and her livestock were failing to do so. Getting fodder for the animals was a big problem.

"I used to go to Ratlam, 50 km from here, for a few kg of fodder for my three cows and had to borrow money from the village money lender who charged interest at the rate of 50 to 70 per cent," recounts Jadila Bai. In 1992, Jadila and her husband realised that the cows were a burden. After selling them off for Rs 100 they left for Indore 150 km away in search of work.

But today the hills have turned green and so have the once barren fields in the area. No longer does Jadila Bai have to leave her home. Her daughter who accompanied them during their hardships in 1992, now goes to a school. Her fields yielded one tonne of wheat in 1996 and her savings now amount to Rs 5,000.

Sixty-five-year-old Manna has a similar tale to tell. When the hills were brown his fields were filled with pebbles. Today, his five acres are green with corn and he expects to earn Rs 20,000 by selling the crop. He also manages to sell five litres of milk everyday for Rs 25. From the verge of starvation the villagers of Jhabua have virtually crossed the rainbow to find a pot of gold at the other end. How did this miracle come about?