The Indian farmer is 'naturally' organic. But without support and premium for 'green' crops, there is no alternative but to take the chemical route 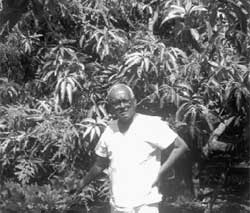 The government's interventions have focused on promoting certified organic production, missing out the challenge of using the organic route to reward traditional, marginal farmers. This misplaced priority seems to be changing. A master plan for the production of organic coffee is almost ready. Formulated by the coffee board, the plan focuses on belts where tribals and small growers cultivate the commodity without recourse to chemical pesticides and fertilisers. The blueprint identifies areas for production potential and draw up packages of practices.

Organic tea production is also gaining momentum. A company in southern India -- the Singampatti Group of Estates of the Bombay Burma Trading Corporation -- practices organic cultivation of tea on 312 ha and produces 9,000 tonnes of fully certified organic tea annually. The corporation is the largest single producer of certified organic tea in the world. The certification is carried out by IMO.

The Darjeeling tea gardens have also turned organic after some consignments of Darjeeling tea were rejected by Germany in 1993 because of high pesticide content. There are now 11 tea gardens which grow organic Darjeeling tea, and account for 10 per cent of total Darjeeling tea cultivation. Goodricke for example, annually produces 2,500 tonnes of organic tea from its six estates in Darjeeling.

Though the operational costs for organic tea is five times that of conventional farming, the price it commands is 80 per cent higher than conventional tea. According to Atul Kaushik, former deputy secretary at the ministry of commerce, organic tea is only one per cent of the total tea market. "To increase the market, these products should be promoted in speciality tea shop," he suggests.

India's organic trade in spices is fast picking up, courtesy the Spices Board India which is promoting organic cultivation of spices. It encourages growers to regard each farming unit as a self-sustainable eco-system and use organic inputs rather than the chemical fertilisers. Vermiculture, intercropping and cultivation of legumes are promoted in this package.

There are a number of private Indian organic exporters of spices also. Peermade Development Society, Peermade is one such exporter. The Society exported 30.27 million tonnes of organic black pepper in 1998-99 to the US and Germany. The Netherlands also bought 12 million tonnes of organic white pepper from the society in 2000-01. There are small Indian, exporters of cardamom like the Kerala Cardamom Processing and Marketing Company Limited, Mas Enterprises Limited, Vandanmettu Exporters of Cardamom, Gandhi Sons, Mumbai and so on.

The Indian Organic Food, a New Delhi-based company, has ventured into organic commodities like basmati and other varieties of rice, tea, lentils, grains and sugarcane. Products are internationally certified and are being imported to countries all over the world. The company is a member of IFOAM Asia. Indian Organic Food has developed Anupaan, a vitaliser which ensures healthy growth of plants and crops. Totally organic in nature, the vitaliser is being tested in Germany, Portugal and New Mexico.

Contrary to popular belief, Indian farmers are realising that organic farming can increase yields. Bhanu Shinde, a farmer from Lohgaon village in Paithan Taluk of Aurangabad says, "I have used organic farming since the last four years for my vegetables, sugarcane and wheat. My wheat production increased from 500 kg per ha during conventional farming to 700 kg per ha in organic cultivation. The yield of brinjal has doubled with the use of organic inputs." G Mehtre of Tasgaon, Maharashtra, has been growing 115 varieties of mango organically for the last 10-15 years.

Dinkar Punjaram, a farmer from Aurangpur village in Aurangabad district of Maharashtra, grows bajra (millet), chilli, chana , papaya, wheat and sugarcane organically. He says, " We use compost and make Amrit sanjivani as a nutrient for the plants. To make 250 grams of sanjivani, we mix 25 litres of cow urine, 25 kg cowdung and jaggery. We also use another preparation for plant protection using garlic, chilli, hing (asafoetida) and tobacco leaves." He adds, "We earn about Rs one lakh in a year through our 2.4 ha farm."

Narayan Reddy has a 3.6 ha farm located at Soranhunise near Varathu village in Karnataka. Since 1975, Reddy has been organically growing a wide variety of crops like soyabean, brinjal, tomato, potato, gram and cardamom. The Institute of Social and Economic Change, Bangalore has verified that Reddy nets between Rs 70,000-80,000 per year.

For exporters of organic products, success comes slowly but steadily. Harpal Singh Grewal, director of a New Delhi-based organic produce export company Indian Organic Food, explains the formula of his success, "Firstly you must raise awareness about the need to consume organic foods. This will be a period of loss. Then, enter the market with a professional mindset. Finally make your foods a fashion. Though during the professional period some profits are achievable, sustainability will come only when the fashion period starts." For sustainability, quality is key. "Once your quality has been established there is no stopping you. Your products will sell like pancakes and command the price they deserve," he adds. The company, running a 2,000 ha organic farm professionally in Sirsa, Haryana, exports organic sugarcane products, peas and basmati rice and some cereals.

While farmers associated with big exporters do not have to worry about the sale of their products and their certification, small marginal farmers are a harrowed lot. One such farmer from Ettumannor of Kottayam district in Kerala, Raju Joseph, says, "I cultivate coconut, coffee, rubber, black pepper, nutmeg, banana, jack fruit, tea, turmeric, cashew and vanilla in my farms with SKAL certification. I paid Rs 20,000 last for certification. But now with low exports, I cannot afford the certification cost."

Few groups which are trying to bridge the gap between the consumer and the producer within the country are gripped in trouble. ECONET, a network of consumers and producers or organic products in Bangalore, is finding that it cannot bear the high handling costs. "If we can get bulk orders, this brings down the costs and improves our profit margins," says Vasu, programme officer, ECONET. He reveals, "We started the ECONET network in 1993 with 104 members but now we are left with only 17. Distances are long and the price is often only 5-10 per cent more than conventional produce. Storage is a big problem and many farmers go back to conventional farming."

One approach to deal with these problems as organic farmer Ram Babu Shinde from Aurangabad suggests is, "to organise a market in nearby towns where producers and consumers can meet and purchase products." The general secretary of IFOAM Asia, Daniel informs, "We promote production of organic products in 45 villages. We hire a place in Aurangabad city every 15 days where we provide information to the interested consumers. We inform the consumer as well as sell our produce simultaneously. This strategy is now yielding results."


Given that more than 60 per cent of India's arable land is under traditional agriculture, there is an urgent need to ensure high premium for the produce grown in these regions. "Unfortunately, these farmers are so involved in their struggle for survival that they have no time to figure out what is organic and what is not. The organic produce at present is sold to the arahatiya or middleman and he will not go out of his way to help the farmers," says Kaushik. "However there are examples where non-governmental organisations have found traditional farmers where no chemical products have been used. These NGOs have helped the farmers to sell their produce as organic," he informs.

There are many farmers in India who use crop residues, manures, legumes and neem to grow their crops. They rely on crop rotation and interplanting, leaving the ants, earthworms, frogs and other animals to do their job. These farmers practice farming through organic inputs. And it is high time that attempts are made to classify these practices accordingly.

If this is done, the poor farmers will get a premium price for their low yield. This will also go a long way in alleviating poverty and raising the living standards of the poor villagers. "I do not see any problem in transforming our traditional farms into organic. Most of the agriculture in backward and tribal areas could be classified as organic. Almost all the northeast agriculture is also organic. We must take advantage of this opportunity by arranging a market for their products," feels M C Diwakar, joint director, Plant Protection, Quarantine and Storage, Ministry of Agriculture, Government of India, Faridabad, Haryana.

For exports, an aggressive strategy demanding free access needs to be adopted. Argentina has shown the way. The farmers and government joined hands in the early 1990s and established certifying bodies on their own. They also established the state-of-the-art principles for organic farming which was recognised by the EU. Argentina does not require the services of EU certifying organisations. They do it on their own.

India should take a lesson or two from this. Our policy makers must remember that globalisation may be about free market access but markets do not fall into laps like Newton's apple. They require sustained efforts and proactive strategies.

According to Grewal, "You have to develop a passion for your organic products." The question is: is the government capable of passion?