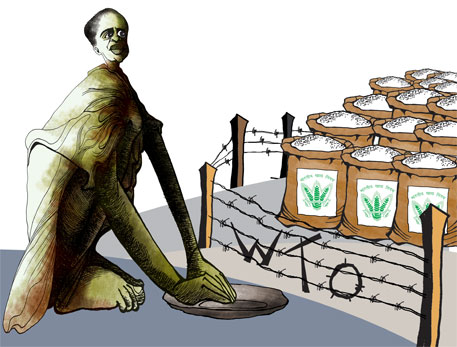 NOTHING HAS exposed the double standards at the World Trade Organisation (WTO) than the current uproar over the implementation of two agreements at the global trade policing organisation. One, termed Public Stockholding for Food Security Purposes, protects the food security concerns of millions of the poor and the livelihood of millions of marginal farmers in developing countries, including India. The other, a Trade Facilitation Agreement or TFA, relates to the improvement of ports and other trade infrastructure such as customs regulations that will allow rich nations smoother access to markets in developing countries (see 'What trade facilitation implies').

Both these agreements were part of the package hammered out in the Indonesian resort of Bali in December 2013 by the ninth ministerial meeting of WTO. India’s refusal to back the TFA without visible progress on the food issues has created an international uproar, with industrialised countries particularly, the US, portraying India not just as a deal-breaker but as one who is jeopardising the future of the WTO. Adding to the hysteria have been Western media organisations which have painted dire and far from truthful scenarios. A Reuters report quoted trade diplomats in Geneva as terming India’s position as “hostage-taking” and “suicidal”. It also accused Delhi of blocking what it described as “the first global trade reform since WTO was set up 19 years ago”. Nothing could be further from the facts.

To start with, India has not reneged on the TFA. It has said repeatedly that it is committed to the TFA and there is no question of backtracking. For another, the refusal of India and like-minded countries-these include South Africa, Bolivia, Cuba, Venezuela and Zimbabwe-has only resulted in a postponement of the protocol of amendment that will incorporate the TFA into the Marrakesh agreement that now governs the WTO. India has only sought more time to back the TFA protocol, which was scheduled to be approved by July 31, 2014. The extension sought is a matter of mere months, till December 2014.

“Nothing is agreed until everything is agreed,” Minister of State for Commerce NirmalaSitharaman was quoted as saying by Financial Times of London after the WTO General Council meeting floundered on July 25. “What is so sacrosanct about the July 31 deadline (for trade facilitation)? What you are doing now is to treat the trade facilitation agreement as a stand-alone issue without any link to the rest of the issues. This cannot be treated as stand-alone. All issues will have to have equal relevance.”

Commerce ministry sources clarified that the other issues relate to agriculture, food stockholding and the concerns of LDCs or the least developed countries. India has simply sought an institutional framework to sort out these issues and suggested a review around October so that a permanent solution is arrived at in December.

Some analysts are surprised by the BJP government’s decision to take the bull by the horns at this juncture. A Delhi-based trade economist who closely follows WTO negotiations confesses that “it has come as a pleasant surprise” that India has finally had the gumption to stand up for the rights of the poor and “expose the hypocrisy inherent in the way the WTO functions”. He says the former UPA government did try to set right matters at the Bali ministerial but caved in to pressure from the developed countries. “Anand Sharma (minister of commerce in the previous Congress government) went to Bali full of bravado but came back whipped since he was forced to agree to put off the subsidy question till 2017.”

One theory doing the rounds in Delhi is that the tough stance was pushed by finance minister ArunJaitley. In the wake of the Bali accord, Jaitley, then a RajyaSabha member, had severely criticised the UPA government for accepting “many open ended clauses that confer unbridled powers on all other WTO members to scrutinise, question and force us to right-size our food security programme. The powers to decide what is right for the farmers and the poor people of the country would no longer reside in the Indian Parliament. It would be dictated by what the rest of the world perceives to be right.”

His prognosis has proved right. During the March 2014 meetings of the Committee on Agriculture, just three months after the Bali declaration, India was repeatedly questioned about its food security programmes that provide subsidised rice and wheat to around 800 million of its population. Others in the 160-member organisation have asked India to circulate more up-to-date information on its domestic support notifications. This, despite the fact that the Bali package provides for a two-year peace clause, meaning their subsidies would not be challenged at the WTO during this period.

Trouble has been simmering since then and Delhi has been repeatedly signalling its disquiet over the progress on the Bali package. It can hardly be accused of indulging in brinkmanship as the US has claimed it is. At the preparatory committee meeting on trade facilitation that opened on July 2, India’s ambassador to WTO Anjali Prasad had once again drawn attention to the lopsided implementation of the Bali package, which was “heavily skewed in favour of trade facilitation” while virtually all other decisions had been swept aside. In observations that summed up the general perception about the biased functioning of WTO, Prasad had said, “In round after round, developing countries have been called upon to concede more and more with little offered in return.”

The TFA is the latest case in point. While the developed countries are pushing with all their diplomatic might on TFA and offering all kinds of financial inducements, discussions on the question of public stockholding have not even commenced despite repeated requests by the Group of 33 developing countries, including India, or G-33. In recent days, WTO Director-General Roberto Azevêdo has outlined an impressive number of steps to roll out the TFA. “As you know, other institutions are also getting engaged with, and excited about, this work,” Azevêdo, who is chair of the Trade Negotiations Committee, had enthused at the meeting where he announced that the World Bank, OECD, the club of rich nations, the International Trade Centre, and the World Customs Organisation had come together to fund and support TFA implementation.

According to Azevêdo, the initiative was “conceived just a few weeks ago,” but he rolled out a fairly detailed programme of lending and technical support, stating that “I think it’s clear we’re off to a great start.” The developed countries have been making a big pitch for TFA claiming that it would add an estimated $1 trillion to the world economy as well as 21 million jobs, 18 million of them in developing countries. The estimates do not have a sound basis nor have they explained how such a huge job creation would come about. More importantly, these estimates have not spelled what the TFA would cost developing countries, collectively or individually.

It is not surprising that India’s mounting exasperation with the current food subsidy rules has spilled over into a refusal to accept the July 31 deadline for the TFA protocol. As Prasad said in a strongly-worded speech to the General Council, the highest decision-making body of the WTO after the ministerial, for India, the agreement on public stockholding for food security purposes takes primacy. “This is important so that millions of farmers and the poor families who depend on domestic food stocks do not have to live in constant fear. To jeopardise the food security of millions at the altar of a mere anomaly in the rules is unacceptable.”

India’s problem is that the skewed WTO rules limit the value of food subsidies to 10 per cent of the total value of food grain production. But the catch is that the support is calculated at prices that are over a quarter century old, as the G-33 has been complaining. The base year for calculating de minimis support is1986-88. Since then the prices have shot up 650 per cent, leaving developing countries with no flexibility to meet the food security of a hugely increased population. On the other hand, the world’s richest trade blocs, the US and the EU, are still giving out billions of dollars in farm subsidies that they had committed to do away with in the Doha Development Round. The US provided $120.5 billion in domestic food support in 2010 because the unfair Agreement on Agriculture allows it to do so. India’s food subsidy amounted to just $12 billion.

As to the brouhaha over missing the July 31 deadline, trade policy specialists point out that the WTO is notorious for missing deadlines. Since its inception in January 1995, the WTO has missed critical deadlines, both those mandated by ministerial conferences and others legally required under the Marrakesh Treaty.

South Africa, in its statement to the General Council, tartly reminded the US which has been harping on the loss of credibility of the WTO because of the July 31 miss that “repeated failure to deliver meaningful outcomes on issues of interest to the poorest members ... can equally be characterised as harming the credibility of our organisation”.

The most egregious example of this is the missed commitments in the Doha Development Round, talks on which started in 2001 and were to have been concluded in 2005. In contrast the TFA looks like a minor blip on the trade negotiations front.