The Modi government has invested hugely in its mission to clean the Ganga, inviting companies and countries to offer their technological expertise. But is it really needed? 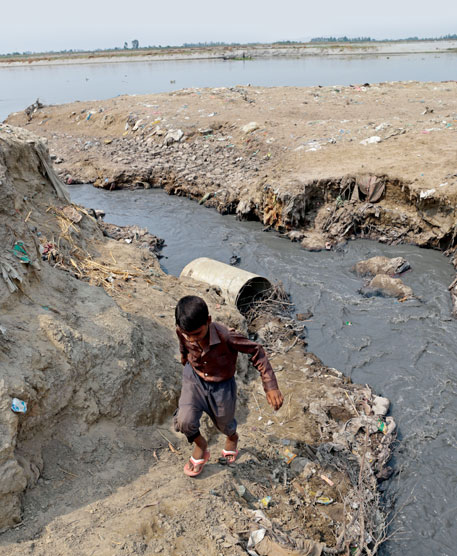 EVER SINCE he came to power at the Centre a year ago, Prime Minister Narendra Modi, who has been elected from Varanasi, has added his own bit of charisma to save India’s holiest river. From attending high profile “Ganga Aartis” to reiterating promises to clean the river, Modi has invested his and his government’s prestige in the Ganga project. It all culminated in April this year, when 200 experts from various countries gathered at the India Habitat Centre in New Delhi. They were mostly technology and infrastructure providers, who had been invited by the Union Ministry of Water Resources, River Development and Ganga Rejuvenation to share their technologies to clean the Ganga. The experts came from Singapore, the Netherlands, Australia, Canada, China, Germany and the UK to name a few. There were also representatives from India.

The experts have offered a number of technologies to clean the river, but experts, mostly from India, say it is counter-productive since many of the technologies already exist in the country.

It is a market out there

Little wonder then that the avenues for companies offering their expertise in cleaning the river are huge. Different companies have offered different technologies to clean the Ganga. For instance, Ecosoft from Singapore is experienced in using technologies on the principle of aerobic and anaerobic processes or using microorganisms for cleaning wastewater. On the other hand, Jinmin Water Co Ltd China uses sequencing batch reactors, activated sludge process and a few modified versions for cleaning wastewater. Officials from the Netherlands-based firm, Qua-vac, who attended the conference, shared their Dubai experience about sucking the sewage by vacuum and bringing it to sewage treatment plants. Sewage collection would be easier this way and instead of a conventional 150 millimetre (mm) pipe used for it, a 75 mm pipe could be used instead. The pipe has to be laid only 30 centimetre (cm) below the ground – this would reduce the cost of supplementation of the sewer system, said Devender Dhapola, Technical Head, National Mission for Clean Ganga (NMCG) under the water resources ministry.

However, these companies may not be suggesting anything new. “Ecosoft’s technology has been designed already by many technology providers in India. If technologies are already available, why we are approaching international companies,” argues B D Tripathy, Coordinator, Centre for Environmental Science and Technology, Banaras Hindu University. Similarly, in the case of Jinmin, ArunaSinha, scientist, Central Pollution Control Board (CPCB), confirms that Sewage Treatment Plants (STPs) in India are already using the technologies that the company is offering. As for Qua-vac’s technology, where a 75 mm pipe can be used for sewage collection, and can be laid only 30 cm below the ground, it also means that to bring sewage from the parts of the cities without sewers laying of pipes becomes necessary, says Sanjay Aggarwal, chief executive officer of Clover Organic Private Limited. Aggarwal had also approached NMCG to offer his bioremediation technology.

The Ganga is polluted mainly because of the uncontrolled domestic sewage. The problem is that the focus on building more and more wastewater treatment plants has taken away the attention from cleaning the river, says an analysis by New Delhi-based non-profit Centre for Science and Environment (CSE). This analysis also shows that sewage generation is underestimated and only building new STPs will not solve the problem as most of the cities lack sewer connectivity.

India already has experience of privatising water and wastewater plants. One example is of the Rithala wastewater plant in Delhi, which was built by Ondeo Degremont, a French company in 2003, and is now responsible for managing it jointly with the Delhi Jal Board.

Dhapola said the foreign companies who have offered their expertise on the Ganga will be working either on design-build-operate-and-transfer basis or public-private-partnership basis or special purpose vehicle basis. The state will choose the technology or infrastructure provider through a bidding process. The Centre will continue to bear the full cost of operation and maintenance (O&M) of the sewage treatment plants for the first five years and after this, the plant will be handed over to the state government. The state may give the O&M to local bodies. When the O&M of STPs will be transferred to the urban local bodies, how well these plants will work remains unclear mainly because of the poor financial state of local bodies in all states along the Ganga, says CSE’s analysis.

However, what is needed most is political will. A K Gosain from the Indian Institute of Technology, New Delhi, says, “There is no dearth of technologies available in India but these technology-specific plans never helped the Ganga.” It needs water.

The state local bodies have always been criticised for not improving urban infrastructure.