...in efforts at getting the environmental message across in moving images 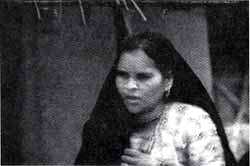 MORE films are being made on environmental issues than ever before; films that closely document issues, as well offer different points of view on the growing global environmental crisis. Many NGOs, activist groups and individual filmmakers have been have being driving their points across through the powerful and seductive medium of the screen.

The approach to the issue, however, is as varied as the number of filmmakers. The form often defines the purpose. Some of them just produce conventional "objective" documentaries while others crank out films that support various peoples' movements. And there are a handful who produce educational films.

The Centre for the Development of Instructional Technology is a distributor and producer of films related to development, many of which deal with the environment, focusing on issues and problems. Pradooshan Kya Kuch Neetiyon Ka Sawal, for instance, illustrates how groundwater has been polluted by a few industries near the Udaipur Canal, and how the local people are trying to organise themselves to resist the setting up of polluting industries in the area.

The Indian National Trust for Art and Cultural Heritage (INTACH) documents different environmental movements. The Greening of Ralegan Shindi, a popular film produced by INTACH, shows how Ralegan Shindi, a drought-stricken village in Maharashtra, was transformed into self-sufficiency. Films like this, based on peoples' movements, are shown to various social groups so that they can empathise with those struggling for a cause.

On the other hand, there are conventional documentaries like Tera View, shown on Doordarshan, which is simply an information sharing exercise. Tera View has been jointly produced by Spotfilms and the Tata Energy Research Institute. Says Neelima Mathur of Spotfilms, "There is an inherent dichotomy in documentaries. Although the objective is to create awareness, they often do not have a mass-based viewership component."

Gargi Sen of the Magic Lantern Foundation offers a way out of this. "Environmental films should be screened at places where a debate can be initiated around the film. Otherwise, the films are viewed only by those who are already well-informed and the message does not reach the masses." Films produced by the Foundation include Because of Our Rights, which documents the fight of the people of Ghad in Saharanpur for access to the forest.

Umesh Mathur of the Electronics Trade and Technology Development Corporation (ET&T) creates environmental awareness among children through the Teleteach project, a community-education-through-video programme. ET&T's films include Trees for Tomorrow and Crowded Deserts. The organisation also sources educational films from foreign producers and distributes their Hindi versions in India.

The United Kingdom's Television Trust for the Environment (TVE) has been providing a link between environmental film producers, environmental NGOs and broadcasters. Set up in 1984, TVE has co-produced over 100 programmes. It also brings out Moving Pictures, a bulletin on new films made in the developing world.