Too little of a good thing

The increasing demand for organic food is causing shortages and adulteration

Too little of a good thing 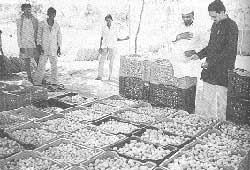 DESPITE the normally high prices of organic foods, there doesn't seem to be enough of it going around. Natu Bhai Shah, a sales representative, says that organic products -- bought mainly by "scientists and intellectuals" -- are invariably in short supply.

Anil D Shah, chairperson of Mahajanam, a Bombay-based NGO that markets organic products grown by farmers in Maharashtra and Gujarat, says that the shortage is because the farmers cultivate such crops only seasonally.

Mahajanam places orders with organic farmers after verifying their cultivation methods and testing product samples. Perishable items such as fruits and vegetables are purchased in small quantities whereas cereals are purchased in bulk.

Mahajanam is confident of meeting the growing demand for natural foods. It has mobilised 50 farmers in Gujarat to switch to organic cultivation and more are following.

However, some farmers allege that they get a raw deal. "About 50 per cent of what the consumer pays goes to intermediaries," according to P D Bapna, a sapota (cheeku or sapodilla plum) grower in Thane district.

Ashok V Sanghvi, a Bombay-based entrepreneur who owns an organic farm in south Gujarat, warns that along with the rising demand for organic food is the risk of adulteration with inorganically produced items. Bapna claims that some agencies go further, buying ordinary fruit at low prices and passing them off as organically produced at much higher prices.

Bapna says that unless organic food is tested and certified, the food agencies mushrooming in the metropolises will exploit both the producers and consumers.