A crippling lack of data prevents researchers from reaching conclusions 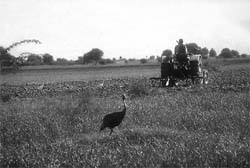 More studies are required to confirm the number of vulture/bird death reports in India. However, it has been known that urbanisation and deforestation have been responsible for a gradual decrease in several species of birds of prey. Scientists and ornithologists say that in southern India, where domestic livestock carcasses are rare and cannot be depended upon as primary food source, vultures have suffered population losses. But they are yet to explain their decline in North India.


"Global comparison of organochlorine concentrations indicated that resident birds in India had the highest residues of hch s and moderate to high residues of ddt s," reads a recent report from the department of environment conservation at Ehime University, Japan.It adds that migratory birds which spend their winters here may also have formidable amounts of these chemicals. Experts speak of numerous instances of pesticide poisoning in Indian birds.

Cranes, says George Archibald of the International Crane Foundation ( icf ) have been affected by the pesticide menace: "Pesticides like ddt are the major culprits. These have fatal effects on the cranes ( sarus ) which adorn the agricultural fields of north India." The sarus , quite adaptable, lives close to human habitation and depends on food grain as its primary food source. This is why they are found in the agricultural land of north India. But its feeding grounds have become their killing fields. The cranes eat grains treated with pesticides which proves fatal. This either kills them or affects their calcium metabolism by making the shells of their eggs thin. This eventually hampers the propagation of the species, Archibald explains.

V S Vijayan, director of the Coimbatore-based Salim Ali Institute of Natural History and Ornithology, confirms the sarus deaths. The farming community around Bharatpur uses aldrin, a banned organochlorine, to protect their mustard crop. Later, mustard oil cakes contaminated with the chemical are used as cattle feed. The sarus gets the pesticide somewhere along the food chain. "We had also detected organochlorine residue in eggs and bodies of colonial nesting birds such as grey heron, cattle egret, spoon bill, painted stork and several others," says Vijayan. An itrc study confirms the presence of these chemicals in cattle feed. The study found significant levels of organochlorines, hch and other toxins in commercially--produced cattle feel available in the country.

Deformed and thin egg shells of the lesser fish eagles were found at the Corbett National Park, India, from 1991 to 1996 by Bombay-based ornithologist Rishad Naroji. Eggs from seven nests monitored during this period did not hatch, many young birds were found dead in the nest. "The species is seriously threatened at Corbett and is likely to be similarly affected throughout its range in India," says Naroji. He voices his suspicions, "One reasonable guess would be that the birds have been affected by pesticides. Significant levels of dieldrin were found in the egg shells based on a quantitative analysis." Further, the waters of river Ramganga, the park's lifeline, have high levels of this pesticide, he says.

A 1997 paper by Naroji in the Journal of the Bombay Natural History Society says the higher reaches through which Ramganga flows are covered with terraced cultivation where farmers used pesticides on a large scale. "The contaminants probably run off into the water system during the heavy monsoon which the region experiences.

This is a matter of great concern as even other animal species in the river could be getting affected," he says, "But we do not know, due to lack of research and information in this area."

While information about decline in vulture population from most parts of India is sketchy, Naroji says there is definitely a decline in southern India. This could be due to efficient disposal of carcasses and cleaner eating habits, he says. As far as North India is concerned, he says: "They have definitely suffered losses in some areas." He cites the Bharatpur phenomenon and says the decline is very likely due to pesticides. "All around the world and in India too, aldrin and dieldrin has been banned. But in Bharatpur, farmers still depend heavily on aldrin," says Naroji. He questions whether these pesticides are past surplus or if they are still being manufactured in India.

Bharatpur is in Rahmani's mind too. Perturbed by the population crash, he thinks that apart from pesticides, there could also be the chance of an unknown avian disease. "But this," he says, "has to be proved by a proper study." And the lack of studies on avian deaths remains the single biggest hurdle in assessing the effects of pesticides. Extensive research is indispensable, agree experts, if we are to save not only the birds, but ourselves too from this chemical bane.

According to Rahmani, vultures and cranes are not the only birds being affected. Rahmani cites the instance of the ring-tailed fishing eagle which disappeared from Bharatpur as a breeding species. "There is no proper study on the effect of pesticides on birds and wildlife so we think the problem does not exist in India. Only through studies will we know the magnitude of this problem. At present, ignorance is bliss," he laments.

Among Indian states, West Bengal has witnessed a recent decline in birds of prey such as eagles, harriers and vultures, informs Kushal Mukherjee, founder-member of the Calcutta-based environmentalist group, Prakriti Sansad . A journal by the Sansad notes: "One big reason for the death of predatory birds is the use of pesticides. Poisonous chemicals like ddt enter their bodies when they feed on smaller animals and reptiles like frogs and snakes. These smaller animals eat insects whose bodies contain these insecticides."

A study on the effect of pesticides on birds was done by S K Maitra and his team from the Reproductive Endocrine Physiology Laboratory of the Burdwan University, West Bengal, during 1987-91. The study concentrated on grain--eating birds like parakeet, munia and weaver bird in the state. Maitra notes long-term effects of organophosphate insecticides: "It does not cause mortality at low doses but causes damage to reproductive system."