Indiscriminate poaching, abetted by government apathy and sympathy from villagers displaced from their traditional forest habitats, is fast wiping out India's tiger population. 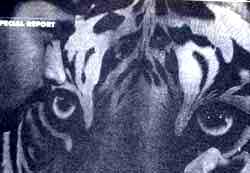 TWENTY years and crores of rupees after it was begun, the Project Tiger success story is crumbling. Indiscriminate poaching, the disappearance of tigers individually identified by experts and the seizure of tiger bones and skins in metropolitan cities have resulted in this situation. Add to this the resentment of the people who have been displaced from the forests on which they subsist so that tiger habitat could be preserved, and you have a recipe for a crisis that no amount of official denials can mitigate.

Experts in India and abroad warn tigers will be wiped off the face of the earth by the turn of the century by government apathy and the consequent poor management of tiger reserves. "The situation is hopeless," says a former director of Project Tiger.

Peter Jackson, chairperson of the cat specialist group of the International Union for the Conservation of Nature and Natural Resources, says, "Project Tiger certainly hasn't saved the tiger. At the most, it has given it a new lease on life. Today, the crisis is perhaps graver than when Project Tiger was started because, barring a few isolated pockets, the tiger population may well be wiped out by the end of this century."

The first sign of the impending crisis came in May 1992 from Ranthambore, a national park as famous for its tigers as for the patronage it received from late prime minister Rajiv Gandhi. As one expert phrased it, "We were rudely awakened from our complacency when we realised that the Taj Mahal of reserves (Ranthambore) had fallen."

The tiger population at Ranthambore fell from 45 in 1991 to 17 in May 1992, though Project Tiger officials contend the latter figure is not correct. Valmik Thapar, a tiger enthusiast who has worked at the Ranthambore tiger reserve for 17 years, is outraged. According to him, "Twenty-six tigers of which I have individual photographic evidence have been missing since 1987."

Earlier this year, Gopal Mogya, a poacher, was caught with a tiger skin in Ranthambhore forest by the police. Mogya revealed he had trapped the tiger and killed it and admitted that he and his brother, Shanker, had killed eight tigers and a leopard last year.

Subsequent investigations revealed the bones of these tigers probably joined the several hundred consignments of tiger bone smuggled out regularly to China and Taiwan, where it is used in traditional medicine as cures for rheumatism, apoplexy and paralysis. "Our tiger is going into the Chinese stomach," said one wildlife enthusiast.

With the decline of the Manchurian tiger -- China now has fewer than 100 tigers -- the demand for Indian tiger bones has grown. A 37-gram piece of tiger bone can fetch as much as $48 in Taiwan. Last year, a poached tiger was found with its skin intact, but its bones missing at the Mahanada Wildlife Sanctuary in West Bengal, reports Vivek Menon of TRAFFIC-INDIA, an agency monitoring illegal wildlife trade. Tiger bones are difficult to detect as they are either powdered or mixed with cattle bones, in which there is a legitimate trade (See box).

When Project Tiger was launched on April 1, 1973, it had nine reserves under its command. This has since grown to 19 areas, some of which are prime tiger habitats. From the dry deciduous habitat of Ranthambore and Sariska to the mangroves of the Sundarbans, several different habitat types are represented by the various tiger reserves in India.

Experts say Project Tiger is not underfunded because its annual budget has increased consistently. Ranthambore received Rs 8.7 lakh from the Centre in 1983-84; in 1991-92, this had risen to Rs 1.1 crore.

What has brought the project to crisis point is poor management of humanpower and resources. Ann Wright, a senior member of the World Wide Fund for Nature, says the Indian Wildlife Board has not met in the past five years and the state boards meet infrequently. State governments accord wildlife low priority and often interfere in the workings of the park.


On paper, a fair number of staff is allocated to each reserve, but often these posts are left vacant. Ranthambore, for example, all through "1991, was without a field director". In Corbett National Park in Uttar Pradesh, there has been no wildlife warden for years, says Brijendra Singh, a member of the IUCN cat specialist group.

The staff employed has little interest in wildlife management and even less training. According to Kailash Sankhala, the first director of Project Tiger, "Today, many forest department officials cannot tell the difference between a tiger and a leopard."

S Deb Roy, former inspector general of forests in charge of wildlife at the ministry of environment and forests, recounts an incident in Manas, where a young man with no experience with wildlife was posted as a research officer. But once he learnt the ropes he was transferred to another post because he complained of illegal felling in the forest.

Perturbed, the IUCN Cat Group recently called a special regional meeting, during which several experts suggested ways of solving the problem. While the technical management of the reserves was definitely to blame, the experts also concluded that tiger poaching would not stop unless the broader issues concerning the management of people living in villages around the reserves were addressed.

Criminal activity in the parks has risen as evidenced by the increase in poaching, but the reserve staff is usually poorly armed compared to poachers who move around in bands, armed with heavy artillery. Terrorist activity, too, has been reported in some areas. At Corbett, the wildlife staff has been warned by extremists that they risk their lives if they enter the park in uniform and with their guns. There are reports from the northeast that extremists poach animals to raise money for ammunition.

Experts reveal most research posts in the reserves are usually unfilled. Researchers claim little is done to encourage them, and independent researchers are treated with suspicion. The absence of a sound research base in most of the parks has led to ad hoc decision-making. Major all-India tiger census jamborees are arranged every five years. But experts say these are complete tamashas, with hundreds of usually unskilled daily wage labourers tromping through the parks, disturbing animals and generating little reliable data.Ulhas Karanth, a wildlife biologist with the Centre for Wildlife Studies, Mysore, who has undertaken an independent research on the tiger in the Nagarhole national park since 1986, says, "We have very little accurate information on tigers in the wild."

Scientists from the Wildlife Institute of India, one of the premier wildlife research institutes in India, do not recommend census operations at all. They point out constant monitoring of the wildlife in the sanctuary, perhaps doing a census in a small area of the park regularly and collecting population trend data, is far more conducive to good management than massive census operations which only keep bureaucrats happy. But, according to present Project Tiger director Arin Ghosh, "Experts aren't our only customers."

And this appears to be more and more evident. VIPs are common visitors to the more famous parks. According to Fateh Singh Rathore, former field director of Ranthambore and Sariska, "The entire field staff is diverted to meet their demands and jeeps whizz around destroying the tranquility of the parks."

So far, tourist traffic has not been regulated to any great extent in the park. Regulated tourist movement in the park, say experts, can help the authorities by adding to their awareness of illegal activities within the park. Tourists can turn informers of evidence of traps or tree-felling within the park. Over the years, a number of villages have been relocated from within the core areas of national parks, but the villagers haven't been adequately compensated. They have been shunted out of the forests on which they have traditionally depended and resentment -- especially against the forest department -- is high. Villagers are known to protect poachers from the forest staff.

To redress this problem, the Project Tiger directorate has initiated eco-development plans for 11 tiger reserves. In this fairly new concept in wildlife management, attempts will be made to develop the areas surrounding the park through livestock improvement programmes and pasture and fuelwood plantations to reduce the dependence of villagers on the park area.

Ranthambore has been sanctioned Rs 8 crore under eco-development over a five-year period. Some work on pasture improvement has started, but reports indicate this, too, is being implemented in an ad hoc way, further alienating the villagers.

Experts feel the local people must be involved in the management of the reserves. Part of the revenues from tourism should go to the people who live around the parks. Jobs should be made available to them within the park and their legitimate needs must be met. A system of rewards to encourage villagers to inform on known poachers could mitigate the poaching problem, they say.

"Every ecologist knows that all animals and plants in an ecosystem are closely linked," says Jackson. "We human beings are but a link in the chain, and if the tiger goes, our extermination will not be far." It now remains to be seen if the government can muster the courage to act to save India's national animal.