As rivers spill over, the sea becomes the new dumping destination in coastal Gujarat 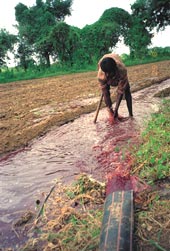 In October 1999, the Gujarat High Court (hc) ruled against any further disposal of untreated industrial effluents into Amlakhadi river -- a highly polluted waterbody of the state. The Gujarat government then planned a 55-kilometre (km)-long pipeline to enable abutting industrial estates to discharge waste directly into the sea. But now, the project -- set to achieve financial closure in November 2002 -- has raised questions about the long-term impact of industrial effluents on the marine ecosystem.

The fact that hardly any detailed studies have been conducted in this field has set the alarm bells ringing among environmentalists. What is more, states such as Andhra Pradesh have decided to follow suit (see box: Coastly affair).
Gujarat has 170 operational industrial estates with close to 2.35 lakh units. Of these, 65 per cent of medium and large-scale industries and 45 per cent of small ones are polluting units, states a report of the Comptroller and Auditor General (cag). At present, these units discharge effluents into various streams and rivers of the state, including the Amlakhadi. As a result, the waterbody has turned into a waste receptacle for more than 1,500 industries in Jhagadia, Ankleshwar, Panoli, Vilayat and Dahej estates (see Down To Earth, April 15, 2000). As many as 989 units are located in Ankleshwar. They manufacture dyes and their intermediates, insecticides, pesticides, pharmaceuticals, plastics, rubber, and textiles. The 300 industries sited in Panoli include those of chemicals, textiles, pesticides, pharmaceuticals and engineering units. In Jhagadia, the 24 units discharging effluents into the river make caustic chlorine, beverages and textiles.

In 1996, the Centre for Environment, Science and Community (cescom), a Vadodara-based non-governmental organisation (ngo), approached the Gujarat Industrial Development Corporation (gidc) and extracted an assurance that no new industrial unit would be set up in Jhagadia unless an effluent pipeline was provided for Ankleshwar, Panoli and Jhagadia to divert discharges from the Amlakhadi. But when gidc -- a quasi-government body that manages industrial estates in the state -- did not keep its promise, cescom filed a public interest petition in the hc. In the face of the industrial onslaught on the river, the court put its foot down in 1999.

gidc floated the 55-km pipeline proposal to comply with the directive, says Michael Mazgaonkar of Paryavaran Suraksha Samiti (pss), a Vadodara-based ngo. It is meant to discharge effluents from the three industrial estates into the Gulf of Khambat. Ashok Rathi of cescom, who has been closely associated with industrial associations on the project, says: "The pipeline will discharge effluents directly into the sea, which can provide unlimited dilution."

The plan envisages two channels drawing effluents from Panoli and Jhagadia to Ankleshwar (see map: Channel change), from where the discharges will flow into a common effluent treatment plant (cetp) 10 km away. The present capacity of the pipeline is about 40 million litres per day (mld), which can be enhanced to 60 mld. This would allow more industries to sprout in Jhagadia once the pipeline is laid. The Rs 137-crore pipeline project is being promoted by gidc and managed by Bharuch Eco-Aqua Infrastructure Limited (beail) -- set up as a front for handling operations. B M Sharma, chief executive officer of beail, reveals that the pipeline is likely to start functioning from March 2004 onwards.

Under the project, the diffuser technology is being used to release effluents into the sea. "It will enable the effluent to be discharged at numerous points equidistant from the pipeline. The intensity of the effluent load will, therefore, be dispersed and diluted," explains Rathi.
On the face of it, all seems well with this system. But it is feared that the pipeline might plunge the marine ecosystem into deep trouble. "Excess organic matter in effluent can lead to oxygen depletion in the sea, thus harming biotic life. An overdose of nutrients, heavy metals and toxic metals can also lead to various problems," warns S P Fondekar of the chemical oceanography division at the Goa-based National Institute of Oceanography (nio).

Whereas nio has not conducted a comprehensive research on the impact of industrial effluents on the sea, sporadic studies do point to the fragile nature of the marine ecosystem. " nio has submitted a draft report to the Gujarat government on the fallout from dumping industrial effluents into the sea, particularly in the Gulf of Kutch region," says P Vethamony, in charge of the Integrated Coastal Zone Management project, nio. Two significant findings have surfaced: firstly, the southern part of the Gulf of Kutch is ecologically fragile as it contains many marine parks and sanctuaries. It is, therefore, crucial that industrial discharges do not reach there. Secondly, it is important to meticulously examine the water current and circulation patterns of the entire region.

Meanwhile, other reports also focus on the potential harm these pipelines can cause. The effluent channel project (ecp) that runs between Nandeshwari and Mahi estuary, finally ending in the Gulf of Khambat, was set up in 1983 and is 56-km long. But it is a channel of plastered bricks and has not been overhauled for the past two decades, points out Rohit Prajapati of pss. The Indian People's Tribunal on Environment and Human Rights, a Mumbai-based ngo, states in its 1999 report that "if the idea of the ecp is to transport highly polluted effluents into the sea to minimise its deleterious effect in the (nearby) villages...then this objective has not been fully served". It further observes that on the contrary, "the ecp has managed to spread...contamination and pollution over vast stretches of land".


The authorities -- both at the state and centre level -- claim that the new pipeline will not harm the environment and that they are taking adequate precautionary measures. "We have notified industrial effluent benchmarks called minimal national standards (minas), which are uniform throughout the country and have to be followed by all kinds of industries," says T Venugopal, director of the Central Pollution Control Board (cpcb), Delhi.

Environmentalists aver that the issue is not just formulating norms, but also ensuring adherence to them. "Most industries dump untreated effluent into the pipeline, which carries it to the sea. The Gujarat Pollution Control Board (gpcb) hardly monitors what is finally going into the sea," says Mazgaonkar. Rathi appears guarded: "The sea (does) have the capacity to absorb effluent (but only if adheres to) the prescribed limits. What will actually be done in terms of effluent discharge ... is anyone's guess...." The cag report highlights how the gpcb has failed to deliver, observing: "Out of 170 operational industrial estates, only 10 have cetps. None of the cetps observe the norms in discharging trade effluent into natural water source."

Venugopal acknowledges that state pollution control boards (spcbs) are not geared up to tackle the situation: "Some spcbs are negligent, as they lack the required staff strength. They also do not have infrastructure and equipment to carry out deep-water sampling." But some officials feel that if environmental impact assessments are carried out, pollution can be controlled.

The switchover to effluent pipelines without an in-depth understanding of the system is likely to have serious repercussions in the long term, leaving policymakers all at sea.