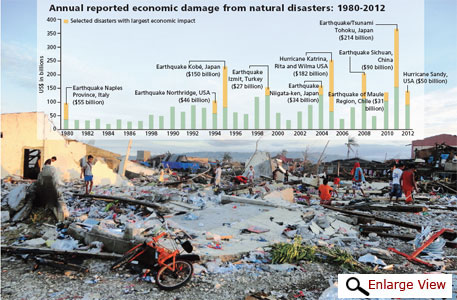 The year 2012 set major records. A quick Google search reveals it was the hottest year in US history and second wettest one in the UK. Data from 2011 and 2010 show similar extremes. But not only is climate change getting worse, it is also getting costlier. A report by United Nations International Strategy for Disaster Reduction (UNISDR) reveals 2012 is the third consecutive year to suffer economic losses of over $100 billion due to extreme weather events. Sixty three per cent of losses were in the Americas, mainly due to Hurricane Sandy ($50 billion) and the drought ($20 billion).

Developed nations tend to accrue large economic losses in the face of a natural disaster as they have more assets and infrastructure. Most developing countries, however, rank far higher in terms of number of disasters that hit each year, number of deaths and percentage of population affected but do not show large financial losses owing to negligible number of insured assets.

Asia was the worst affected in terms of casualties due to natural disasters 65 per cent of those killed in 2012 were Asians. About 20 typhoons and storms hit the Philippines each year and cost 5 per cent of its GDP. Typhoon Bopha that killed 2,000 people in the archipelago ranks the highest for 2012 in terms of deaths due to a natural disaster, followed by floods in Pakistan and Nigeria. “Most victims this year were of floods and droughts, which were responsible for nearly 80 per cent of all deaths. But as they occurred in poorer countries, the economic losses are low,” says Debby Guha-Sapir, a professor at University of Louvain in Belgium.

It is well-known that economic as well as environmental impacts of climate change will not be felt evenly those who pollute the most might not suffer the most. This raises the question of liability and compensation.

Loss and damage
At the most recent annual climate change meet in Doha (CoP-19), under the United Nations Framework Convention on Climate Change (UNFCCC), countries fought a bitter battle to answer just this.

In what was considered a mighty win for developing nations, CoP-19 agreed upon “institutional arrangements, such as an international mechanism,” to address loss and damage due to climate change in particularly vulnerable developing countries. According to Meena Raman of the Third World Network, an international NGO, “The agreement was very significant in accepting the concept of loss and damage as going beyond adaptation. It recognises that there are situations where developing countries will not be able to have any adaptation response but will suffer loss and damage like loss of land, crops, etc.”

Many understand loss and damage as going beyond adaptation: addressing those impacts of climate change that cannot be avoided. But the line between adaptation and loss and damage remains a fuzzy one. Most elements currently being discussed under the loss and damage work programme include conventional ways to address weather-related disasters such as risk reduction and management.

But these are actually ways to anticipate and reduce the impacts of a climatic disaster and fall under adaptation realm. They also do not address slow onset events, like sea level rise and glacial melt. Establishing a clear boundary between adaptation and loss and damage is, thus, the key to defining the scope and scale for a compensation mechanism.

Alliance of Small Island States (AOSIS), a grouping of 43 states, has long demanded such a mechanism. But the term “loss and damage”, has always frightened historically high-emitting developed nations—it could bring liabilities of potentially unlimited economic value. Many elements—like definition, attribution, approach and beneficiaries under this complex issue also remain unclear.

Roadblocks ahead
UNFCCC still does not have a working definition for loss and damage. Many parties are concerned that losses could be narrowed down to economic loss. What about the non-economic losses, they ask? Who would be liable for the loss of cultural identity and indigenous knowledge when an island goes down or when an area turns to desert? While this makes reaching at a solution more challenging, it is crucial to the issue. “Australia is talking to small Pacific islands about rehabilitation. It does not mean just money or giving them some land,” says Harjeet Singh of Action Aid. “These people are about to lose their land, culture and sovereignty.”

Attribution or identifying the proportion of loss and damage due to human-induced climate change as opposed to other factors like climate variability, poor governance or poverty is also technically challenging on many levels and fraught with uncertainties. This has been the largest contention, particularly for the US. Allen Myles, who heads the Climate Dynamics Group at University of Oxford, says for any compensation settlement one would need to differentiate between what fraction of a loss was due to human influence on climate and what fraction might have happened anyway.

‘Loss and damage’ goes beyond adaptation. It is about addressing those impacts of climate change that cannot be avoided

Some, like the European Union, point to the expertise that already exists outside UNFCCC in the area of disaster management and question the level of engagement the Convention should have on the subject. But most developing country parties want any mechanism on loss and damage to be anchored in UNFCCC. They argue that the Convention has several clauses that clearly direct developed countries to take a lead in mitigating emissions and providing financial and technical support to the most vulnerable countries.

Experts, however, believe that even if a consensus is reached on loss and damage, there’s a pressing need for developed nations to mitigate emissions and check further environmental damage.

Atiq Rahman, executive director of Bangladesh Centre for Advanced Studies, believes the reason developing countries are pushing for loss and damage is because developed nations have not met financial commitments on adaptation and are not adhering to emission reduction goals.

“The priority of UNFCCC should be to address long-term carbon reduction targets to keep temperature rise within 2°C. Despite whatever targets we take, adaptation costs will be there as well as those who should pay,” says Rehman. “Beyond adaptation, there is the reality of loss and damage, which includes crucial issues such as displacement of populations, and this will definitely need to be addressed.”