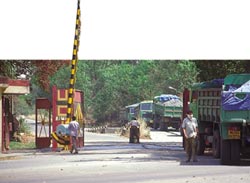 Uranium reserves almost over, little plutonium and chased away by people from digging new mines -- India's nuclear establishment is under tremendous pressure. By 2020, it has to prepare for the thorium-based third phase of the nuclear programme. If this doesn't begin on time, the programme would turn out to be a colossal waste of national resources since Independence. Thorium, the government says, is a boon. Using its 3,00,000 tonnes of thorium reserve, India can ensure energy for 400 years.

USA, Germany, France, Japan, Russia, Canada and Brazil abandoned efforts to build thorium-based nuclear reactors after starting efforts in early 1960s. India, however, has kept its thorium programme alive. The DAE has been running an experimental reactor called Kamini at Kalpakkam since the mid-nineties and is now making plans for an advanced thorium-based reactor. A project report on setting up a 300-MW demonstration plant, which will predominantly use thorium, is ready, said B Bhattacharjee, director of BARC, last August. The plant can be built in 10 years if the centre approves the project. The Bhabha centre has also been developing an advanced heavy water reactor for thorium fuel.

But like the second stage FBR technology, the third too has been delayed. The government is still engaged in the first phase of the nuclear programme and only recently permitted the second phase. Scientists aren't even betting when the third stage will start.


Starting from market funding of projects to external help in technology, the government is now considering all options. With the US resuming collaboration in the nuclear sector, India hopes to get advanced technology for its fast breeder and thorium reactor programmes. Though Russia has offered to help in the thorium reactor technology, it will be years before anything concrete happens. In 1978-79 France promised to give India technology for FBRs if it bought its weapons. But as the former naval chief, Admiral Vishnu Bhagwat, says: "France delivered little." FBRs being considered as a high proliferation fuel cycle, Western countries are hesitant to help a nuclear India. The option of importing uranium has also been blocked. Since the first import of uranium from UK in 1954-55 (see table: India's uranium import) India finds it almost impossible to get foreign uranium. Particularly due to its unwillingness to put its facilities under international monitoring. The Nuclear Suppliers Group has completely denied any technical and fuel assistance to India.


The country's nuclear programme is confused, indicates a study, Long-term cost effectiveness of nuclear energy in India , done by the Nuclear Corporation of India. "Even though the government has supported the cause of nuclear power, there has been lack of long-term plans with financial commitments and strategies to implement these," says the study.


Indian citizens aren't allowed any say in nuclear issues; the government believes only a select group can understand them. The DAE works in secrecy and little information on nuclear issues is allowed. "Science demands discipline and transparency. The nuclear establishment seldom observes this," says Parameswaran.

"Public health can never be a violation of national interest. The loss of credibility in Jaduguda would keep on trailing the nuclear establishment," says Sanghamitra Gadekar, a scientist who has studied the effects of the Jharkhand mines on people.

"In the sixties, there was talk of nuclear plants producing up to 10,000 MW of power by the eighties. But we have not been able to reach even the 3,000-MW mark. Let the government first account for the money it has spent on atomic power projects over all these years," says Dhirendra Sharma, who is an anti-nuclear activist and a former head of the science policy unit at Jawaharlal Nehru University in Delhi.

So, what's the way out for India's nuclear programme? Sorry, you can't suggest anything. It's all secret.