Institutional support helped rehabilitate the Irulas of Tamil Nadu after their traditional occupation of snake-catching was outlawed. 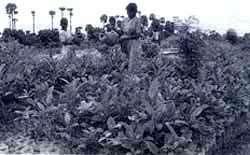 THE WILDLIFE Protection Act of 1972 made illegal the traditional occupation of the Irula tribals of Tamil Nadu. Consequently, the tribals who specialised in catching snakes, rats and termites and in collecting medicinal herbs, took up agricultural labour and road laying -- jobs that could not sustain them through the year.

Moved by their plight, wildlife conservationist Romulus Whitaker and his wife Zaheeda, who have worked with the Irulas since the mid-1960s, decided to provide the tribals a legal occupation that incorporates their hunting-gathering skills. They formed the Irula Snake Catchers' Industrial Cooperative Society (ISCICS), which was registered in 1978. Says S Dravidamani, who is in charge of ISCICS, "Only in December 1982 did we get the government order to catch snakes."

Starting with 26 members in 1978, the cooperative now has 182 members, of whom 92 are licensed to catch snakes. Members are paid for the snakes they bring in. Venom is extracted from the snakes once a week and after a month, the snakes are tagged and released in the forest. The venom is sold to various institutes, with 25 per cent of the proceeds going to the forest department. ISCICS members get regular dividends, after deductions to meet administrative costs, members' education and medical expenses.

While ISCICS ensured employment for some of the Irula men, Whitaker realised that cooperatives were not ideal because the department of industry, under whose jurisdiction the cooperative fell, was not sensitive to tribal issues. The women also wanted their own project, as most of the men drank away their earnings. The result was the Irula Tribal Women's Welfare Society (ITWWS), which was registered in 1986 and took up afforestation of village lands.

With about 100 members, the society began raising mixed forests in 400 ha of panchayat land in 1987, supported by a Rs 30-lakh grant from the National Wastelands Development Board. Says Whitaker, "The women were keen on keeping the men out of this, except when digging the deep bunds."

Of the four afforestation sites, three were returned to the panchayats for management and upkeep. The fourth site, a 16-ha plot on which rotational grazing is being tried out on an experimental basis, has been kept by ITWWS as a demonstration model. Families are allowed by a committee of ITWWS staff and the villagers to collect pre-determined quantities of fodder on payment of a small fee.

One outcome of the afforestation project was the starting of a seed bank. The Irulas knew the names of trees and also where seeds could be collected, and they also turned out to be good at locating species which nobody else knew grew in the region. Comments Harry Andrews of the Madras Crocodile Bank Trust, "The marsupium tree, called vengai in Tamil, was believed to grow only at high elevations or in riverine areas. Our team located it at a village called Kolathur, 28 km from the crocodile bank." Seeds are now sold or exchanged for those from other afforestation groups.

The tribals' knowledge of medicinal plants is also being studied. Recently, with funds from an individual donor, ITWWS brought a 3.25-ha plot on which it will grow certain commercially valuable plants. Last year, ITWWS began a non-formal education programme, funded by Oxfam and run on the pattern of the National Literacy Mission.