It’s my land, not yours

How it is acquired

ItÔÇÖs my land, not yours 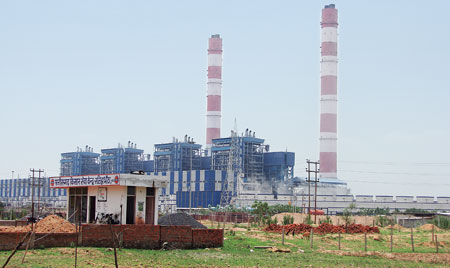 Land for industries is acquired either through the government or through private negotiations with land owners. The government categorises agricultural land as single crop, double crop or barren. Compensation is determined depending on the category. After the government rates were revised in March, the compensation for doublecrop irrigated land went up from Rs 1 lakh to Rs 10 lakh an acre (0.4 ha). The rate for single-crop un-irrigated land increased from Rs 75,000 to Rs 8 lakh an acre and barren land, which fetched Rs 50,000 compensation now receives Rs 6 lakh per acre.

But this is more often in theory than practice, said Dayal Chand Soni, resident of Dhurkot. "Land in our village has been falsely categorised, bringing the category down by a notch or two as the government plans to acquire it for the company."

Most of the project proponents prefer to deal directly with villagers since government procedure takes a long time and often leads to severe protests. Project proponents are known to use subterfuge and muscle-flexing.

"Company officials said, 'if you don't give us the land, we will acquire it through the government and you will get less'," said Das. This threat is fast becoming common. Another popular tactic is: acquiring the village common land first. This seldom meets with protest since the land does not belong to any individual. Once the common land is acquired in patches, companies acquire from those who are willing to sell. Then the company can acquire the remaining land using force or money.

Villagers allege this is the manner in which the Jindal group acquired land for its 1,000 MW power plant in Tamnar in Raigarh. "The company bought some land through personal negotiations, some it acquired through the government and the rest was encroached upon," Shankar Patnaik, Tamnar resident, said. People are not happy with the compensation they received. According to another resident, Satyam Patnaik, "The management's attitude towards land acquisition is not acceptable; we were not compensated properly either with money or in terms of employment promises." 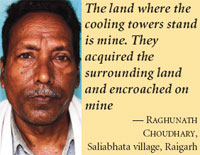 Pointing at the Jindal power plant's cooling towers, Raghunath Choudhary of Saliabhata village, next to Tamnar, said the land where the cooling towers stand is his. "They acquired the surrounding land and encroached on mine when I refused to sell," he said. He has filed complaints with the gram sabha, the police, the collector, and finally, with the court. Choudhary is without land and without compensation even after the tehsildar's court, the local revenue officer's, ordered the land be restored to him. His petition in the Bilaspur High Court is awaiting judgement since 2007.

The battle for land is also a battle against hunger. "A massive amount of land has been given to industry already. This has increased food insecurity in the state," said Gautam Bandyopadhyay of Nadi-Ghati Morcha, an NGO working on land and water in Chhattisgarh. An astounding 10,200 ha of paddy area was diverted for industry and other uses in 2009-10, according to Devji Patel who reconfirmed the figure with the state land department. State environment minister Munat said if all MoUs are executed, land will become a worrisome matter for the state.

Agricultural land is just one part of the story.

In addition, about 7,000 ha of forestland is up for grabs as prospecting for minerals has alread started there. There have been instances of industry bypassing laws and exploiting forestland. The Bharat Aluminium Company Limited (BALCO) in 2005, cut down thousands of trees and encroached on 405 ha for its expansion project. Similarly, when Essar Steel cut trees in Bastar to create a corridor for its project, no action was taken against the company except imposing a minor fine. The state ranks second in terms of forestland diverted for mining projects—accounting for 15 per cent of India's total forestland diverted for mining.

The mineral-rich districts in the state have more than 30 per cent of their area under forests. In Korba, 78 per cent of forestland has been affected due to mining activity, said a 2006 study by the Indian Institute of Remote Sensing in Dehradun. Of this, six per cent has been completely converted, where mining and associated industrial activities take place. Fifty-five per cent have become barren and wasteland as a result. And 17 per cent of forestland have become highly degraded forests.

In Korba, mining activity has affected forests beyond the lease area, the 2006 study found. Most of the villagers are traditional forest dwellers. They don't have documents to prove they own the land. When displaced from their centuries-old dwelling they are denied compensation and employment.

What do tribals get?

The state maintains no statistics on the number of tribals displaced by mining and industrial projects. But the perception is that this number is big. About 39 per cent of the state's population lives below the poverty line, as per the state's vision document for 2010. Of the seven key mining districts in the state, six figure in the Planning Commission's list of 150 most backward districts in the country; Dantewada and Bastar are among the top 10.

Mining companies give peanuts back to the community. South Eastern Coalfields Limited, a subsidiary of Coal India, spent about Rs 7.4 crore in 2009 on corporate social responsibility (CSR) in the region while it made profits to the tune of Rs 2,117.2 crore. National Mineral Development Corporation, India's largest iron ore producing company, spent about Rs 85 crore on CSR when its profit was close to Rs 3,450 crore. The private sector is far worse compared to these public sector undertakings. To give an example, Jindal Steel and Power Limited (JSPL) spent a meagre Rs 12.2 crore on CSR in 2009-10 when its profit last year was Rs 1,537 crore.

The surge in industrialisation has evidently benefited a very small section depriving a majority of the population. It is depriving them of land, resources, and water. Mine no more is their plea.