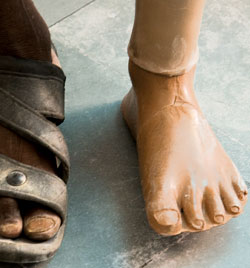 Over three decades, the Jaipur Foot has benefited more than 300,000 people, reached 22 countries and
is set to undergo a transformation. vibha varshney travels to Jaipur to measure the progress

For over 30 years it has been changing people's lives, helping them stand on their feet. Now the Jaipur Foot itself is poised to get a leg up. Bhagwan Mahaveer Viklang Sahayata Samiti (bmvss), an ngo that makes the famous life-like foot, is collaborating with the Indian Space Research Organisation (isro) to improve the prosthesis by using new technology and material.

A polyurethene foot will soon replace the rubber foot bmvss has been manufacturing since 1975. The new foot made of the synthetically produced polymer will be cheaper and lighter.Machinery has been put installed for making the polyurethene foot but full-scale production will begin only after trials. For making the limb cast, the organization is introducing the sand-casting method, an advancement over manual casting, provided free by the Center for International Rehabilitation, usa. This method helps in fitting the limb more quickly. Using the existing technique it takes half an hour to make a plaster-of-Paris cast manually. With sand-casting this can be done in five minutes. The limb is put inside a bag filled with sand and a vacuum-creating device attached to the bag is turned on. This forces sand particles to stick around the limb and the cast is ready. This method can boost production from 50-100 pieces a day to 1,000-2,000 pieces. Collaborations are also on with Stanford University, usa, to modify the joint in the above-knee prosthetic limb to bring down its cost.

The Jaipur Foot is also taking its first steps towards getting regulatory approval. Though widely used, the foot has remained a piece of handicraft and is not recognized as a medical device. The isro technology will help computerize and standardize the process--and get approval.

However, to view the foot as merely a technological marvel will be a mistake. "The foot became famous because it is a social innovation," says D R Mehta, an ias officer who had started bmvss, making it possible to reach the foot to the poor. While the foot has remained unchanged, its footprint has grown over the years. Since 1975, the organization has provided artificial limbs to 310,220 people. The foot has been a great success in war-torn areas where landmines cause loss of limbs. The Jaipur Foot is available in 21 countries other than India, including Afghanistan, Bangladesh and Nigeria.

Mehta is trying to find ways of taking the foot to people in the rest of the world. In September, bmvss, provided training in fitting the foot in Islamabad and Karachi. Soon it will start supplying the foot there. Similar efforts are on to increase access to the foot across India so that people do not have to travel to Jaipur.

The fact that the Jaipur Foot technology is in public domain--it was not patented--means it is still available to the poor. It costs around Rs 1,500 compared to the Rs 8 lakh a similar foot costs in the us. People from all over the country come to Jaipur to get the foot. All the more because along with the foot, help in setting up a business and other assistance is provided free of cost. bmvss even employs some of those who come seeking aid. Sampat of Katni district in Madhya Pradesh had been without work since he lost his leg in a truck accident in 2004.The organization is providing him money to start a tea shop in his village. Dayal, a 35-year-old rikshaw-puller from Jabalpur in Madhya Pradesh, who was waiting at the workshop to receive his custom-made foot, also hopes to start work again. Dayal lost his leg in an accident six months ago.

The Jaipur Foot has indeed come a long way from the late 1960s when Sawai Man Singh hospital could not afford the cost of providing this prosthesis. The three people involved in making it popular are now in their late seventies. Orthopaedic surgeon at the hospital Pramod Karan Sethi, who fine-tuned the technical aspects of the foot and received the Magsaysay award for this, is now a consultant with the privately owned Santokba Durlabhji Memorial Hospital in Jaipur. He spends his time working on lightweight callipers for the polio-afflicted. Sethi says the foot has been successful because it was need-based and cost-effective. Fashioned after the western sach foot (solid ankle cushion heel), the Jaipur Foot was much better than other prostheses available in those days. It looked and felt like a real foot. With it, it is easy to walk bare feet on rough terrain and even squat on an Indian style toilet.

Ram Chandra Sharma, who had crafted the life-like foot, spends his time at bmvss trying to perfect it. His workshop doubles as a museum. More than 50 artificial legs, made of anything from bamboo to metal, are mounted on the wall chronicling the progress of foot over the years. Soon the room will boast another sample the new polyurethene foot.