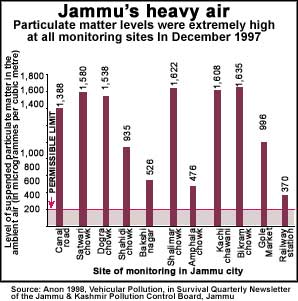 "In Jammu, 90 per cent of air pollution is vehicular," says A B Jandiyal, environmental engineer with the Jammu and Kashmir Pollution Control Board (j&kpcb). A cpcb report has already branded Jammu as one of the most polluted cities of the country. Yet no regular monitoring of the ambient air is conducted. Barring one study each by j&kpcb and cpcb, which showed an alarming picture, there is no other data.

In December 1996, cpcb found that the spm level during the daytime at Satwari Chowk, a commercial area, was about 10 times the permissible limit at 1,915 g/cum. Two other sites had spm levels above the 1,000 g/cum mark. Among the 12 sites where monitoring was done, the lowest figure recorded was 190 g/cum, which is barely under the permissible limit. "The excess concentration of spm in the atmospheric air may be attributed to the excess number of vehicles plying on the roads during day hours. Moreover, the dispersion of spm and other pollutants is being hampered as the city is located in a valley," notes the cpcb report.

When j&kpcb monitored the ambient air in December 1997, the results were worse. The lowest level was 370 g/cum and the highest was 1,635 g/cum (see graph: Jammu's heavy air). Of the 11 sites where monitoring was conducted, six recorded levels well above the 1,000 g/cum mark. Beyond this, there are no scientific estimates of air pollution in Jammu. Jandiyal says the problem is of humanpower: "We have state-of-the-art machinery, but we do not have qualified people to operate them." M A Waheed Dewa, senior scientist at j&kpcb, Srinagar, differs on the availability of equipment: "j&kpcb is grossly understaffed and we do not even have the monitoring equipment." Inayat-ul-Khan, member secretary, j&kpcb, says, "Due to militancy in the Kashmir Valley, work has come to a standstill during the past 10 years."

Jammu is a concrete jungle teeming with buildings, vehicles and people. The population has increased from 260,000 in 1981 to 425,000 in 1994-95. The local people are unaware of the rising pollution levels in their city and those who know about the existence of j&kpcb dismiss it as a defunct organisation. The city urgently needs regular monitoring. That the city is situated in a valley makes it all the more important as pollution tends to linger and the phenomenon of inversion becomes a serious problem during winter.