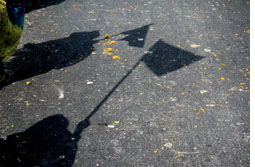 About 25,000 people, mainly landless and displaced villagers, marched from Gwalior to Delhi in October, demanding land rights. They called the march 'Janadesh-2007', a satyagraha for self-reliance and dignity for the poor. samrat mukherjee caught up with them near Mathura

It was an incredible sight at Chhatta, some 20 km from Mathura: thousands of people from 15 states walking on national highway No 2 in neat rows stretching to over six kilometres. They had begun their 350-km-long march from Gwalior on Gandhi Jayanti, and were headed for Delhi to deliver a janadesh or verdict: usher in land reforms to end hunger and poverty. The march was organised by Ekta Parishad, a Gandhian organization. The parishad had worked towards this rally for four years, going to villages and organizing people for the protest. Most of the marchers had been displaced from their land in the name of development and conservation. "We won't go back if our problems are not heard. We are ready to spend our life in jails," said Mina Devi, a labourer from Hilsa in Bihar's Bhagalpur district. The marchers maintained composure and discipline; even when three of them were run over by a lorry in Chamuha, a small town 10-12 km from Chhatta, not one of them retaliated violently. After a peaceful sit-in protest for a few hours, they resumed the march, flags in hand and slogans on their lips. 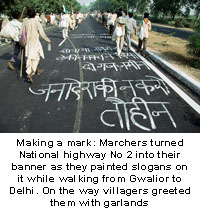 Earlier on October 15 taking a break from the rally, Ekta Parishad chairman P V Rajgopal reached Delhi and along with social activists Aruna Roy, Harsh Mander, Ramesh Sharma and Nikhil Dey met United Progressive Alliance chairperson Sonia Gandhi and presented her a draft paper on forming a commission to draw up a national land reform policy. In front of Jantar Mantar and Rajghat hundreds of people waited to greet the padyatris. Rajgopal, back on the road, summed up the mood: "Ours is a 21st-century satyagraha. It is the time for us to do or die."