Most politicians and activists see the Forest Conservation Act as a hurdle towards empowering the tribal population. They want the act amended 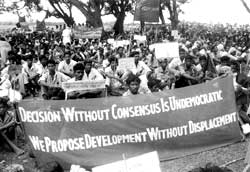 ON NOVEMBER 15, 2000 when the collective dream of some 22 million people for half-a-century rolled into reality, there was hardly anybody to celebrate. Jharkhand, India's youngest state and one of the richest, was born at midnight. Twenty minutes later, a new government was sworn in to chart out its destiny - a century after the legendary Birsa Munda's call for self-governance.

Few kilometres away from Ranchi, the capital, in the tribal village Gari, lay the challenges to and solutions for Jharkhand's future. For survival, the 250-odd residents depend on the fast receding forests and the one crop they harvest during monsoon. "A new state or an old one, we have to survive on them," says Mangra Munda, a resident. On second thoughts, he adds, "But if we get more water, we will harvest more."

Munda knows the route to prosperity, but he is helpless. The village does not have a panchayat, because Bihar has not held panchayat elections for two decades even though it was one of the first states of India to adopt the Panchayati Raj system. Except the postman, who is also a village resident, no government officials go to Gari. "Life is tough but we don't have anybody to approach," says Mangra. So when the village's only link with the outer world, the transistor radio, announced the birth of Jharkhand there was little merriment, but much hope.


Amid expectations are the new challenges for the leaders. To address the region's pressing problems, a new development strategy is needed. The state does not have panchayats. The strong presence of ultra Leftist groups cannot be ignored. Forest cover is dwindling. "But the government has to perform as it has to fight elections in two years," says Ajaya Verma, a senior journalist based in Ranchi. "Jharkhand is a distinct socioeconomic enclave. It needs a suitable development strategy," says Saryu Roy, convenor of the ruling National Democratic Alliance.

The Jharkhand movement thrived on the issue of natural resources management and distribution, and more importantly 'governance by the people'. It revolved around water, forests and land. Unfortunately, despite the riches and the struggle for statehood (longest among the three new states), no political party has a development blueprint ready for the new state. But one thing is for sure: everybody believes it is vital to take a U-turn in its development path - from the mines and industries-based economy to a natural resources-based sustainable one. Mining is eating the forests. "The mineral wealth will be depleted one day, but along with that the forests will also disappear," warns Sahadev Jha, chief conservator of forest. Mines and other industries are in any case considered useless by the local people as they employ hardly five per cent of the workforce, while displacing around 30 per cent of the state's population. "Forest, land and water are the focus," assures Babulal Marandi, the chief minister (see interview: If necessary we can change the Forest Conservation Act).

Ram Dayal Munda, former vice-chancellor of Ranchi University and a social activist, says, "Agriculture was ignored, while all the attention was given to mining and industries. Forest was also taken away from the tribal people as it contributed seven per cent revenue to the state's coffer."

One of the reasons cited for the strong ultra Leftist presence in many districts is that most of the fertile land is owned by non-tribal people. In the 1950s, under the Five Year Plans, large areas of fertile and forest lands were used for industrial purposes. Millions of hectares of forest land were taken over by the government under the Indian Forest Acts of 1878 and 1927, and the Bihar Private Forest Act, 1927, converting community forests into a source of revenue.

The loss in quality of forests is attributed mainly to the leasing out of forest land to contractors associated with timber trade. This was stopped in 1981 but, according to forest officials, the mafia stepped in the illegal timber trade backed by politicians. It is an acknowledged fact that Naxals were called by villagers dependent on forests to get rid of the mafia. "The Naxal threat has definitely saved many forest," admits Jha. The three major Naxal groups active in this region have issued a ban on felling.

The Bihar government adopted the joint forest management (JFM) in 1990. Hence, Village Forest Protection and Management Committees (VFPMC) have been formed in many areas. Out of the 1,675 VFMPCs constituted in Bihar, 1,402 are in Jharkhand. "Under the present arrangement, after the villagers form the VFPMC, the forest department usually takes three to five years before formally entering them into the JFM programme. Due to this, the rate of spread of the programme is very slow," says I B Singh. Under the present sharing arrangement, the villagers get free fodder and fuelwood but there is a resource crunch. "We have not been able to pay the villagers. Due to this our credibility is at stake and the Naxals are targeting us," admits a forest official.

"Jharkhand is malnourished," says A K Sarkar, dean (forestry), Birsa Agricultural University (BAU) - 40 per cent of the land in the uplands is already unfit for agriculture, the remaining 60 per cent in the medium and lowlands are getting silted and losing productivity. According I B Singh of Gramin Vikash Trust, 50 per cent of farmers earn for three to five months a year, 20 per cent for nine to 12 months and only 10 per cent earn surplus. "The number of BLAD (between life and death, the people who don't have any source of livelihood) people is increasing," he says.

What makes the situation worse is the lack of irrigation facilities despite heavy rainfall. Only seven per cent of the land is irrigated. The state produces 2.10 million tonnes of foodgrains, while the demand touches 4.36 million tonnes. Already two million people are reluctant nomads or 'eco-migrants'.


To start with, the state needs to evolve its own development model, one that is not dependent on mining and industries. The sheer pressure of the Jharkhand movement has forced political parties to talk about natural resources. In fact, the first cabinet meeting of the state deliberated on a move to scrap all forest-related cases pending against tribal populations in an attempt to bring them closer to forest conservation. Besides, says Sudesh Mahato, a cabinet minister and convenor of the All Jharkhand Students Union (AJSU), "Panchayat institutions have to be revived so that we get a semblance of governance at the roots." The government has decided to hold elections in February. This will be the first step towards devolution of power to people," says Munda.

Politicians cutting across political lines agree that the problem of Naxalites can be controlled only through community management of resources. It was also echoed in a Union home ministry meeting of Naxal-affected states early 1999. With the formation of the new state, various social groups representing different tribal communities have demanded that the forest be handed over to them. Going further, the Jharkhand Mukti Morcha (JMM) issued a statement threatening all corrupt forest officials and opposing the appointment of a former Indian Administrative Service officer as governor.

But the biggest hurdle seems to be the Forest Conservation Act, feel politicians and social activists, that curtails people's access to the forest. Roy feels that the FCA has failed to conserve the forests. "It has made almost all tribal people criminals in a legal sense. Let Jharkhand make the start by going for pro-people amendments," says Roy.

What you need is basically a political will to transfer power to the people, feels K J Anthony of Jharkhandi Organisations of Human Rights (JOHR). The forest department, which hasn't been able to cope with the degrading forests, has also come out with a document seeking transfer of MFP to the people. "Being a representative of the tribal community, I will make sure that people get the FCA suitably amended," vows Mahato.

The same political will is also called for in water conservation efforts without which the 'change of development axis' doesn't seem possible. Though the government has spent Rs 140 crore in the last two decades on soil and conservation measures, it has not shown any results. However, a review of 100 villages done by I B Singh shows that availability of water has restored food security and has also contributed towards mobilising communities for other programmes. "With traditional water harvesting, the state's 50 per cent lands can be irrigated," he says. The chief minister has also acknowledged it. It is a politically sensitive decision of Marandi as the state saw a massive protest against big dams and some of his cabinet ministers spearheaded the movement. Says Mahato, "Jharkhand's topography is suitable for small structures". Referring to a local need-based water conservation policy, R P Roy Sharma, vice-chairperson of BAU, says: "Let the panchayats and users' cooperatives be at the helms of affairs. It would make water conservation a big mass movement and also help people fight the problem of water scarcity."

Back to Gari and Mangra Munda. The transistor radio must have aired the new government's agenda and his expectations must have undeniably soared.

Reported by Kumkum Dasgupta in Raipur, Nitin Sethi in Dehradun and Richard Mahapatra in Jharkhand , with inputs by Gopal Krishnan