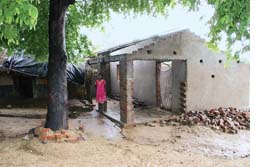 After suffering the idiosyncrasies of a dysfunctional government housing programme, tribals in Jharkhand are building their houses under the scheme. They are now spared the depredations of contractors and the uncertainties of houses that either never get completed or aren't worth living in.

The state government announced the Birsa Awas Yojana--a housing scheme for tribals in rural areas--in 2004. It allotted Rs 64,000 per family, which has now been increased to Rs 70,500. Birhors and Sabars, two of the nine tribes classified as primitive in Jharkhand, are the beneficiaries.

Construction was initially taken up by contractors in east Singhbhum's Mosabani block in 2005. Work was done under the supervision of the block development officer and the gram sewaks (panchayat assistants). In the past two years, contractors have completed 15 houses and 10 are being built. But, tribals allege, the houses were far from being perfect.Cracks developed within a year of the houses coming up and in some cases cracks developed when the houses were being built.

It was then that the tribals took steps to resolve the issue. "The tribals realised that most of the money was being siphoned off by contractors and gram sewaks and decided to act," says Shubhra Dwivedy, secretary of the ngo Socio Economic and Education Development Society (seeds). Organised as the Primitive Tribes Forum, a group of about 250 Birhor and Sabar families approached Ravi Ranjan Mishra, the block development officer. After persistent efforts, Mishra visited the houses with cracks. However, Mishra said that the houses built by the contractors had no problems. Unsurprisingly, nothing changed.

In response, the tribals organised protests. Along with seeds, the forum demanded action against the errant contractor and demanded they be given the chance to build their own houses. The tribals wanted the funds to be given to them directly and made it clear they were not ready to put up with the whims and fancies of the contractors. They met Manish Ranjan, the district's deputy development commissioner, in May 2006 and presented their demands.
After some reluctance, Dwivedy says, Ranjan directed the block development officer to give funds to 10 Sabar families in Gayaghata village as a pilot project on the condition that if the tribals spent the money elsewhere, they would not be given any more funds. Ranjan also promised that if the houses were satisfactory, others in the community would also be given funds to build houses.

In July 2006, the first installment of Rs 5,000 was deposited in the account of the beneficiaries in Apna Bank, which was set up by the state government. With the money, the tribals began constructions. "Sabars' houses are of better quality. They are more spacious and stronger," says Dwivedy.

The tribals have received Rs 48,000 per head so far. Lodhra Sabar of Gayaghata, who is constructing his own house, says the remaining amount will take care of the roof and the tiling of the floor. They have added brick slabs in their homes and plan to fix iron doors and windows too. Moreover, they say their houses are stronger because they are laying the foundation around 75 cm deep. The contractors dug half that.

Although the tribals find it tough to ensure that funds are deposited in time, they say their condition is much better than that of other villages in the block. The villagers are pleased that they have got the approval to construct five more houses. The Sabars are optimistic now. Next on their agenda is a village boundary wall. Clearly, they have braved the roadblocks well.