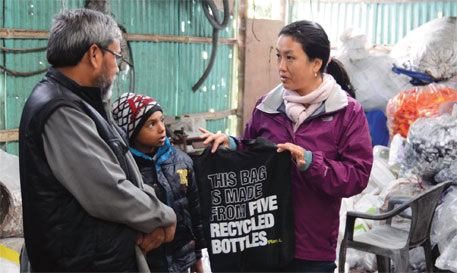 Take this bag. It’s for free,” a helping hand at a supermarket in Gangtok told a woman as she struggled to fit all her purchases in a cloth bag. Her jacket pockets, too, were full, but two guavas still looked for space. “Here, take a paper packet,” he repeated, but Yishey D Yongda stuffed the guavas in the back pockets of her jeans and walked out. The oddity of her appearance must have been unforgettable, for years after the incident people in the supermarket still remember her as “the lady with guavas in her back pockets”.

In a remote corner of Sikkim, Yongda, joint secretary at the rural management and development department (RMDD), chats heartily with four-year-olds on toilets and hand washing, and finds out what residents do with their waste. This is the first thing she does when she visits any village. It may seem unexciting, but after seven years of peeping into latrines she is acutely conscious of the need for toilets as a precondition to human existence and dignity. As she converses with the children, it is difficult to imagine that she once passed trays as a flight attendant.

In 1996, when she was 21, Yongda joined Jet Airways after graduating from Indraprastha College in Delhi. Within nine months she got tired of the plastic smiles her job demanded and quit. She started teaching in a government school in Sikkim after topping the state graduate teachers’ exam. A few years later, she joined the state civil services. After working in various departments in 2007 she finally found her calling at RMDD.

Now, on a rare weekend when she is at home and not working, her children plead, “Not again, Mom. Please don’t start talking about toilets.” Yet, on a winter camp last December when her 10-year-old son Rigyal found the camp instructor burning trash at the end of the day, he warned, “If my mom sees this she will kick your ass.”

The Yongda household has a “garbage protocol”—segregate biodegradable from non-biodegradable waste and compost it. Everyone cooperates. Her seven-year-old daughter Riga adds calmly after she is done explaining the dos and don’ts of recycling, “I would love a job like mom’s because I love to travel.”

Yongda’s office at the old secretariat is a steep climb up the hill in Gangtok. Her pin-up board is full of clippings. One of them is about a man who died in rural Maharashtra after being chased by a squad entrusted with checking open defecation. The man suffered a cardiac arrest while trying to flee. 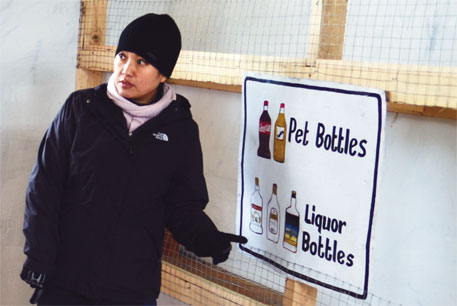 Her cupboard has bins and bowls made of used plastic straws and nameplates made from used tetra packs. A junior officer shows off the rural sanitation statistics printed on used paper. Yongda has brought about some veritable changes in the department, such as collecting electronic waste in separate boxes, not using plastic water bottles and styrofoam cups in workshops and training programmes. “Thank God, we do not drink too much water due to the cold climate here, else we would have to walk to the water filter every time,” says Yongda’s senior D R Nepal, secretary at the department. All this is not an elite green syndrome. Way back in 2008, Sikkim was awarded the Nirmal Rajya status, the first Indian state to be free from the scourge of open defecation. It earned Yongda a state award for meritorious service.

“A lot of credit goes to officers like her who believe in the importance of sanitation and waste management,” says Anil Ganeriwala, former secretary at RMDD and now joint secretary at the Union Ministry of Health and Family Welfare.

Yongda’s heart and soul is now focused on solid waste. “The landfill outside Gangtok worries me. It will soon grow into a mountain. The solution is not to dump everything in a landfill but to recycle and reuse as much as possible”. She was introduced to the concept of zero waste by a pioneering non-profit in Kerala, Thanal. The endeavour also started her acquaintance with Maqbool Ahmed alias Alam from Bihar. “I am his fan. He is the only informal recycler in Sikkim who is doing wonders for our environment, but remains unnoticed and unappreciated,” she says.

He told Yongda that chips packets cannot be recycled and their only destination is the landfill. So she stopped buying them, only to be chided by her son for being the odd one out. “I told him that we need to minimise consumption of food sold in multilayered packets which cannot be recycled, and that buying from the local bakery and eating fresh produce is healthy and generates less waste,” she says.

From 2010, Sikkim moved towards zero waste in rural areas, surmounting challenges of terrain, inadequate funds and absence of informal waste dealers. Most of Yongda’s time is now spent training and sensitising panchayats, block officers, schoolchildren and laypersons on the need for zero waste. The concept is simple—build resource recovery centres in a cluster of panchayats, collect and segregate nonbiodegradable waste such as plastic, bottles and metal, and send it for recycling. Biodegradable waste is composted and sold, and becomes a source of revenue to fund the zero-waste initiative. Till date, 14 panchayats and a few urban municipalities have adopted the concept.

Yet, people are surprised when at workshops the department hands out reading materials in bags made of grocery sacks. “They expect those big black conference bags. I explain to them the importance of recycling. I tell them not to say, ‘It is a drop in the ocean’, but to say, ‘I will also do it’. For, if we do not make a start now, in 30 years we will be surrounded by landfills,” she says.

In Sikkim, political will and a receptive bureaucracy have worked together in missions that may seem impossible in other Indian states. Take for instance the effective ban on polybags and public smoking, the mission to convert Sikkim into an organic state by 2015, achieving the total sanitation target in 2008 when the rest of India has pushed it to a far away 2022.

“For things to work, the stars have to be aligned. I am lucky to be working in Sikkim,” says Yongda. “My driver is ever ready to go on a field trip. My seniors encourage new ideas and my peon appreciates the importance of rural sanitation as much as I do.” Her friends joke that she will get withdrawal symptoms if transferred from RMDD. “But waste is as much an obsession as it is a responsibility. It is a lifelong affair that will not end with a new posting,” she says.

A practising Buddhist, she feels the concept of zero waste has changed her outlook towards life. “I used to be such a waster. I would have a hundred pairs of shoes. Now I understand the need to consume minimally. As the saying goes, if everybody starts consuming the way the average American does, we will need four planets.”

With an air of mischief, she says she carries a few polybags with her when she travels to the West and leaves them behind. “That is my revenge on tourists who trash my state with canned food, water bottles and what not.”

Yongda’s family and friends think she is more of an activist than a bureaucrat. “I have been called a green terrorist. People hide plastic packets and packaged water when they see me around,” she says, then bursts out laughing.