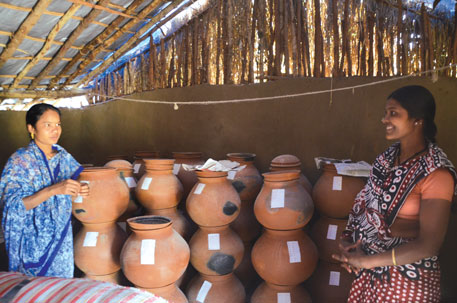 Lit by a kerosene lamp, the two-room hut just outside a sleepy hamlet in Odisha’s Rayagada district can easily pass off as any other farmer’s house in this tribal region. Step inside it, and one is taken aback by the hundreds of earthen pots labelled with coded stickers stacked in a corner as well as under the bed. These pots treasure over 750 varieties of rice grains, some on the verge of extinction. Keeper of the seed bank, Debal Deb, has been collecting and conserving these rare native varieties for over 16 years. His only help are the farmers who still depend on heirloom seeds.

Adjacent to the hut is a field where Deb grows these varieties to conserve their germplasm. But this is no easy task. Barely half a hectare means Deb gets 4 sq m for each variety where he can plant only 64 paddy hills. This is just above the minimum viable size of about 50 hills required to maintain the genetic resource of a crop. Then there is the problem of maintaining the genetic purity of landraces grown next to each other. Internationally recommended isolation distance is at least 110 m, which is impossible to follow on such a small farm. But Deb has managed to overcome this constraint by planting each variety surrounded by the ones with different flowering dates (see ‘Treasure and the tricks’). After harvesting and threshing, Deb saves some in his earthen pots and distributes the rest among farmers to promote their use and make people aware of their advantages. Deb’s conservation strategy was published in Current Science.

It has only been a year since this ecologist-turned-agriculturalist moved to Odisha with his seed bank Vrihi. Before that, for over a decade, he travelled across eastern India, collecting seeds of unique and important indigenous rice varieties from farmers. He set up Vrihi in 1997. Then, Deb had about 200 rice varieties. Vrihi was the first non-governmental seed bank in West Bengal. Gradually, Deb felt the need for their conservation and distribution. In 2002, he set up a small farm of 0.7 ha in Bankura district where he would regularly grow the varieties. But consecutive droughts in 2009 and 2010 led to a loss of some of the varieties. Deb started seeking a place with assured irrigation facility. This is when Debjeet Sarangi of Living Farms, a non-profit that works on sustainable agriculture in Odisha, came to his rescue and helped him secure the plot in Rayagadha for a lease of Rs 4,000 a year.

“I was influenced by Debal’s articles. The more I tried to find out about him, the more astounded I was. He has done doctorate in community ecology from Calcutta University and post-doctoral research in ecological economics and marine and estuarine resources from University of California, Berkeley in the US, and Indian Institute of Science in Bengaluru. I used to wonder what a man of his calibre was doing in inaccessible areas,” says Sarangi. His curiosity ended in 2005 when he heard that Deb was visiting some villages near Bhubaneswar. “I was in West Bengal then for a training in sustainable agriculture. But I skipped it and took the first train to Bhubaneswar to meet him. He spoke the language of farmers. There was no lab science in his speech but pure agriculture ecology. That day I realised why he left his well-paid job at WWF in 1996 to work on a subject which is away from the luxurious lifestyle.”

Driven by pure passion for sustainable agriculture, Deb has also collected several indigenous varieties of pearl millet, brinjal, sesame, bottle gourd and legumes. “These heirloom seeds are our best bet against environmental vagaries—late monsoon, scanty rainfall, flooding, soil salinity and attacks of pests and pathogens,” says Deb. India has rice landraces perfectly adapted to each of these conditions. Despite 60 years of research into genetics of rice, scientists have not yet been able to create a variety that can yield sufficiently in marginal environmental conditions, he adds.

Deb’s argument is based on his field experiences. In May 2009, super cyclone Aila swept the Sunderbans and salinised thousands of hectares overnight. A handful of traditional farmers sowed three salt-tolerant rice varieties. Deb distributed three more salt-tolerant varieties to a dozen farmers in the island. They were the only ones to reap some rice the following winter. This year, with delayed monsoon, rice seedlings in many parts of eastern India perished in seedbeds. But farmers who adapted sturdy landraces did not have to worry much. “They are more resilient than any modern variety,” says Deb.

But what about farmers’ profit? After all, modern varieties and hybrids are high-yielding. “No profit from any enterprise is sustainable in any economic system,” Deb replies. “If the goal is to quickly maximise profit, rapid resource depletion is inevitable, and we should not complain about pollution and health hazards and the climate change.”

Deb’s wisdom comes from his daily interactions with farmers, who, he says, are better observers of farm ecosystems than most agriculture experts. This is because specialists are trained to look into a specific aspect of nature, while generalists are capable of linking different aspects of the complex ecosystem, he adds. Deb confesses that the reason he relies on local farmers for all his on-farm conservation and research is that he has no financial means to employ well-trained science graduates or researchers. “Moreover, how can I be sure that a researcher working on my farm will not hand over a rare germplasm to an agro-biotech company for whatever amount of money?”

Deb believes that regardless of any institutional or governmental support, his legacy will live on with the support of his farmer friends.

Interview: Treasure and the tricks