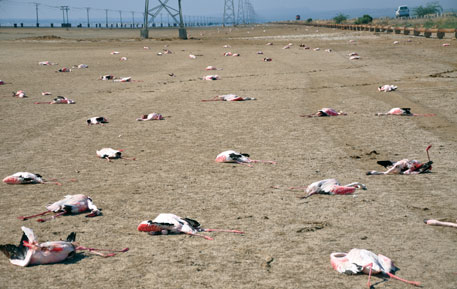 Flamingos are dropping dead in one of their favourite breeding grounds on earth. In the saline flats of Gujarat the birds accidentally collide with or get electrocuted by high-tension cables and telephone lines that pass over their breeding grounds in the Rann of Kachchh. Residents and ornithologists say they witness mass deaths of the pink-feathered bird across the region every year. But the state forest department says it has reports of 139 flamingo deaths only this breeding season.

Around September every year, just as winter is about to set in, flamingos from across the country and faraway lands of Europe and South Africa swoop over the lagoons in tens of thousands. By this time the south-west monsoon has already inundated the warm, marshy wetlands. Brimming with fish, shrimps and blue-green algae, the shallow waters become a preferred breeding and nursing ground for the bird, says Anika Tere, who teaches zoology at Maharaja Sayajirao University in Vadodara. Since flamingos make nests on the ground, they prefer the sandy islets scattered across the Rann of Kachchh to avoid predators. Many stay till the end of winters till their young ones are capable of flying, says B M Parasharya, ornithologist at Anand Agricultural University in Anand.

Tere and Parasharya have extensively studied the feeding behaviour of flamingos in Gujarat. Their study titled “Flamingo mortality due to collision with high tension wires in Gujarat” appeared in Journal of Threatened Taxa on November 26.

The researchers warn that consistent mortality could seriously affect the bird’s population. Flamingos require specific conditions for breeding because of which their reproductive rate is slow, says Parasharya. BirdLife International, a global network of bird conservation organisations, classifies Lesser Flamingos as near-threatened. “They have very few breeding sites,” says Tere, adding that their deaths be taken seriously.

Flamingos are sensitive to disturbance. A passing vehicle or even a flipping fish can create a flutter in the flamingo colonies, leading to the birds flying into the cables. Overhead wires are not visible to them and they do not have enough time to manoeuvre to avoid collision. The deaths mostly occur at night or in wee hours, says Tere who would often come across dead flamingos in the morning during her research.

The recent 139 officially acknowledged deaths occurred in Khadir, a small island in Greater Rann of Kachchh, over a couple of days in the third week of November. Two power lines, of 120 volts and 11 kilo volts, cross the island to provide electricity to 16 villages there. Devesh Gadhvi of Kachchh Ecological Research Centre blames the deaths on the 11kV high tension cable, laid last year right above the birds’ breeding ground.

But the Gujarat forest department attributes the death to an unprecedented number of flamingos visiting the Rann of Kachchh this breeding season. “Generally we see 50,000-60,000 flamingos every year. This year the region received good rainfall and along with it brought 600,000-700,000 flamingos,” says D K Sharma, chief conservator of forests, Gujarat, adding that this is for the first time he has received reports of mass flamingo deaths.

Gadhvi says the mass death at Khadir is the second such instance in the region this year. In June, at least 150 flamingos had died after colliding with cables in Kumbhar Ubada in Bhavnagar. The island is a summer feeding ground for Indian Greater Flamingos. And the trend is only worsening each year.

Tere, who has documented flamingo deaths due to collision between 2002 and 2005, says mass deaths of the bird are frequent across their feeding grounds along the coastal wetlands, in the Gulf of Kachchh and the Gulf of Khambhat. Feeding sites at the salt pans of Bhavnagar and Jamnagar districts are the high-risk zones (see map). The incidents remain largely unnoticed due to lack of awareness and non-reporting, she adds. 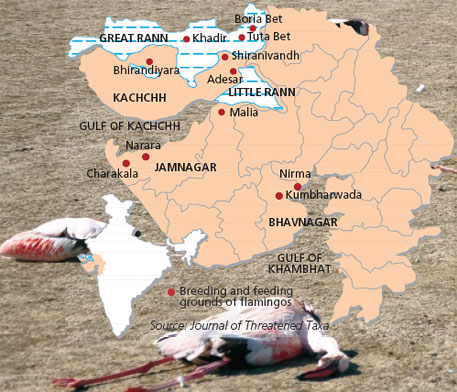 However this time, after the flamingo deaths caught the media attention, the forest departmnent rushed to action, or at least it seems so. Officials are attaching radium tags on the high tension wires. The tags act as reflectors during the day and shine during the night, keeping the birds at bay. The forest department is also discussing with the state electricity board the option of burying the wires underground.

The mass electrocution of flamingos has once again brought to the fore the old concerns of death of wild animals and birds due to electrocution (see table). The matter came before Parliament during the ongoing winter session. Replying to a question on November 28, Union environment and forests minister Jayanthi Natarajan told Parliament that the ministry has asked the concerned state governments, where incidents of death of wild animals are reported, to ensure that power transmission lines have proper earthing systems and they are regularly inspected to avoid sagging.

The Central Electricity Autority in 2005 issued guidelines to all states asking for appropriate measures to save wild animals from electrocution. The guidelines include putting spikes on the lines to ward off animals, joint inspection of transmission lines by electricity and forest department twice a year and investigating every electricity trip. “Even these simple measures are not taken by the government which leads to such electrocution deaths,” says Tito Joseph, programme manager with the Wildlife Protection Society of India.

The problem is global. At the recent wildlife conference called by the UN Environmental Programme in Norway, experts said electrocution is pushing several birds like Eurasian owl to the highly endangered status. Hundreds of thousands of birds die annually due to electrocution in the African-Eurasian region alone. The situation is alarming for slow-reproducing migrating birds, experts at the conference warned.

UNEP released guidelines for countries. Since hot spots for electrocution are mostly found in open habitats lacking natural perches or nesting trees, it suggests placing electricity cables underground or insulating them, and installation of bird-friendly perching and nesting devices. Installation of markers or bird flight diverters in overhead wires also scares birds away from wires, it says. The Gujarat forest department can start adopting the suggestions.