The rights of indigenous communities, which have nurtured traditional systems of knowledge through the ages, will be discussed at length at Bratislava. But the South is not showing any urgency in this direction 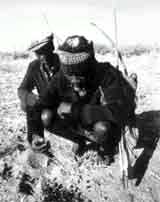 representatives of 180 countries are preparing to discuss the significance of traditional knowledge systems and their role in conservation and use of resources from May 4 to 16 at the Slovak capital of Bratislava. It is expected that the rights of indigenous communities -- the real holders of this vast treasure of knowledge -- will be centrestaged at the meet, although governments of developing countries have done precious little to ensure this. The controversial issue of trade in biotechnology products will also come up for negotiation.

The meeting is the fourth conference of parties ( cop ) of countries that signed the Convention on Biological Diversity ( cbd ), the international treaty adopted at the 1992 Rio Earth Summit. The signatories will deliberate on a global strategy to conserve and manage the world's dwindling genetic resources that include all plants, animals and microorganisms.

The cbd has three objectives: conserving biological resources; using them in a "sustainable manner"; and ensuring that the profits of commercialising these resources are shared fairly and equitably among the member countries. In the last six years, the member countries have staged three such meetings to take stock of the progress in achieving these goals. Each time, they have focused on examining particular components of biodiversity, because the area is too complex to be tackled as a whole.

Government representatives would negotiate over the ways and means in which local communities can be rewarded for not only nurturing and enhancing biodiversity for generations but also in providing the vital information on using them. The cbd has made special provisions for them. Article 8 (j) of the convention obliges member nations to enact laws to ensure that indigenous communities are involved in promoting the "wider application" of these knowledge systems and innovations. It also calls on the governments to ensure that the benefits of the utilisation of this knowledge and resources are shared with the indigenous communities.

Although some groundwork has been done by countries in the last two months, it was evident that the governments were not paying enough attention to this issue at the meeting held in Buenos Aires in November 1996. Calestous Juma, executive secretary of the cbd secretariat, held a five-day intersessional workshop on Article 8 (j) in a bid to push for more action on this front in November 1997 in Madrid, Spain. Participants included 62 governments. They examined issues such as the influence of current laws and policies on traditional knowledge systems and the incentives that can be offered to the indigenous communities.

The end-product is a report advising member countries on developing a specific work-plan on Article 8 (j) to include, among other things, development of mechanisms to ensure full and equal participation of local communities in all cbd implementation processes and providing incentives for maintaining and enhancing biodiversity. The creation of an open-ended intersessional working group or a subsidiary body was also proposed.

This will be exclusively responsible for examining the role of traditional knowledge and to move the issue forward at the cbd forum. The report will now be placed at the Round Table to the ministers representing member countries during the first two days of the Bratislava meet. The meeting will then negotiate on the proposals made in the report and decide on the future plan-of-action on Article 8 (j).

"The developing countries must play a very aggressive role because the interest of their local communities is at stake," says R S Rana, head of the biodiversity cell of World Wide Fund for Nature-India ( wwf-i ). More than 80 per cent of the Earth's biodiversity is stored in these countries. Their indigenous communities have made enormous contributions in developing bioresource-based products. The advent of biotechnology has made their role crucial. Hence the governments have to ensure that the discussion on Article 8 (j) moves in the direction that they want it to move.

"Countries of the North will try their best to put a spoke in the wheel," warns Rana. They are the users of the resources and knowledge systems, and the biotechnology industry lobby is putting tremendous pressure on the governments to thwart negotiations on Article 8 (j). They are wary of making specific commitments on sharing profits with the South.

On the other hand, the South has hardly taken any initiative. The cbd secretariat had asked member nations to submit case-studies on measures taken to implement Article 8 (j). A note has been prepared on the response received. Out of the 180 signatories to the cbd , only 74 countries have come up with such case-studies, and more than half of them are from the us and Canada. None have come from Africa, and very few from Southeast Asia and Latin America. In other words, nations that would be most affected by the negotiations on Article 8 (j) have not bothered to respond to the secretariat at all.

The Indian government called a meeting with non-governmental organisations on April 21 to discuss its strategy for the Bratislava meet, where it only gave evidence of shoddy preparation.


The Biosafety Protocol will be the other significant issue at the meet. In 1995, the second meeting of the participating countries held in Jakarta, Indonesia, established a working group on biosafety. Developing countries pushed hard for it, expressing deep apprehensions about the potential risks that biotechnology can bring to environment and human health. The group's mandate was to develop a legally-biding protocol on safe transfer, use and, handling of genetically modified organisms. In other words, its job is to draw up guidelines on transnational trade in biotechnology products.

Since then, the group has met four times. It intends to conclude its work by the end of 1998. In Bratislava, it will brief the participating countries on its progress and ask for some decisions to be taken regarding its future work. The participating countries will consider the holding of an extraordinary meeting at the end of 1998 to adopt the protocol.

The South can use the Bratislava meet to thrash out some of the issues in the protocol that remain unresolved. For example, the onus of assessing the risks of a particular biotechnology product lies with the nation that imports it. And in this trade, the importing nations are mainly from the South. The North dominates the export market.

At the last session of the working group held in Montreal in February 1998, some countries, including Ethiopia and Colombia, declared that many of the "buyers" of biotechnology products did not have the skill to make accurate assessments nor did they have enough funds to carry out the expensive tests. So the responsibilities should be shared and the role should be very clearly defined. But nations of the North were under considerable pressure from the biotechnology industry, representatives of which were present in full strength at Montreal. As they were reluctant to make firm commitments, the decision was postponed.

The industry also did not allow their governments to move ahead on the issue of liability or compensation to be paid to the importing nation in case of an accident that damages its biodiversity. Claims for compensation may stem from "excessive expectations" of the developing countries, declared a corporate delegate. This is another clause that remains unresolved. The global community will observe the Bratislava meet with interest as these issues are raised and quick decisions demanded.