Kolam tribals in Maharashtra struggling to get their land back

Kolam tribals in Maharashtra struggling to get their land back 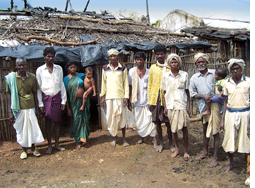 Devrao Atram, a Kolam tribal from Maharashtra, got his land back two years ago. He had given 5 hectare (ha) on contract to a non-tribal banjara family 25 years ago. When he wanted to claim his land back five years from then, he was beaten up and driven out of the area. He sustained as a labourer till the Bombay High Court ruled that the land be returned to him.

The Kolam tribal community lives in Jiwati tehsil in Maharashtra's Chandrapur district. And there are several others like Atram whose lands have been encroached upon and who have either got their land back or are still fighting to get it back.

However, there is no respite for those who have got their land back because they suffer constant threats from non-tribals (see box: Tribal-non tribal conflict). Shramik Elgar, a labour union working in the district, is helping them claim their rights over their land.

There are 82 tribal villages in Jiwati and there are cases of land grabbing in nearly all of them. So far, according to Elgar, 501 applications have been received, of which possession has been restored in 300 cases, 180 applications stand rejected and the rest are awaiting the Bombay High Court's verdict.

But the bigger challenge, says Paromita Goswami, president of Elgar, is retaining the possession after rights have been restored by court. "The non-tribals are well connected. They do not hesitate to resort to violence even after court verdicts," she says. Anandrao Khodape, a resident of Nagapur village, says he has seen violence ever since Elgar started work in the area in 2003.

"The first time Elgar held a meeting discussing land rights in Nagapur village in June 2003, truckloads of non-tribals accompanied by Shiv Sena goons surrounded the area. They had brought cans of petrol and tried to burn the car. The police arrived just in time," says Khodape. Elgar activists say their organised campaign along with the Kolam tribals has helped tribals get their land back. "My patta (deed) for 6.5 ha has been there for long. All of the land was encroached and now, with Elgar's help, I have been able to get about 2 ha back," says Nachubai Jangu Masram of Chikhli village. In Ambezari, some non-tribals connived with the Public Works Department contractors and had a 12-foot wide road constructed through Chandrakala Marape's land. They made the road to save their own lands from being taken for the project. However, Marape says that with Elgar's intervention, the land was restored and he got Rs 67,000 as compensation.

But not all have been as lucky. Non-tribals have taken police's help to harass tribals, say Elgar activists and villagers. "The rights of 32 families were restored in Belgaon village. But 15 men were then taken to the police station and beaten up on fake charges. In neighbouring Pallezari and Yellapur villages, villagers were beaten up while working on their newly-restored lands," says Lakshmibai Korwate of neighbouring Belgaon village.
There is also the problem of unorganised land records in the Jiwati tehsil. In June this year, it was found that there was confusion in survey numbers. Survey numbers are alloted as part of routine demarcation exercises by revenue and forest officials. The situation led to the administration taking measurements again, the results of which have left many tribals distressed. "I have a patta for 10 ha. But I know nothing about survey numbers. The tehsildar said my land is in a different survey number. After he left, the labhans (non-tribal community) uprooted my crop and took charge," says Bhimrao Karmu Shidam of Pallezari village.

S S Mundhada, tehsildar of Jiwati, agrees there is a problem with the survey numbers.

"Jiwati was created in July 2002. During independence, the area was entirely forested and has since then changed its status several times. There is marked confusion in survey numbers," he says. On tribal land cases, Mundhada says the tribals' practice of shifting cultivation has led to them possessing lands at many places and hence the problem. "During the distribution of land pattas in the 1970s, each family was given a patta of one of the several lands they were cultivating," he says.

Goswami says the encroachers have made things worse but tribals have been resilient. "The non-tribals, who have encroached on both tribal and forest lands, have tampered with markers, intensifying the confusion. This will take time to sort out. Meanwhile, we have been asking tribals to keep possession at all costs. Earlier, they would run away at the slightest threat. But now they raise questions (see box: Nadappa village) and stick to their point. I suppose that is most important," she says.