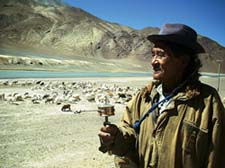 The decision by Jammu and Kashmir's Leh district to declare the Changthang region a highaltitude wildlife sanctuary has put Ladakh's Changpa nomads in a fix. The nomads have, for long, been using the land for grazing their livestock including their famous pashm goats. They say the decision will hem them in, though they have, for centuries, been living in harmony with Changthang's ecosystem. The administration's decision has threatened other communities too (see box Livelihood loss?).

The move to create the wildlife sanctuary, through a notification issued by the Leh district magistrate in January 2007, is part of the administration's plan to strictly implement the Jammu and Kashmir Wildlife (Protection) Act, 1978.The notification is in compliance with a Supreme Court order of September 2002, restricting human activities in protected wildlife areas and also follows a visit of the Central Empowered Committee (cec) to the Pangong lake--an important biological reserve pool for many species of migratory birds--last summer.

The act was not properly implemented in the state because of a shortage of staff at the wildlife department. The state government has already identified a 4,000-sq km tract for the sanctuary. Other areas coming under the plan include the Pangong Lake, Chushul, Sato-Kargyam and Anley marshes, and the Loma-Skagjung pastures.

Changthang, meaning eastern flat land, is located east of Leh on the India-China border. The average altitude of the area, which is home to wild animals and rare birds, is around 14,600 feet above sea level. The proposed plan has been mooted as an immediate measure to save the biodiversity of the region which is under threat, say authorities. "Many of our tents are near the lake and we fear that they won't let livestock graze in the area," says Konchok Stobgais of Man Merag village. The pastoral people say if the area is declared protected, they will have no place to go.
Others, too, say the plan has shortcomings. "All of Changthang has been outlined for the sanctuary, instead of being practical by pinpointing the focus areas of biological importance," says Rinchen Wangchuk, a wildlife activist with Snow Leopard Conservancy, an ngo in the region. "The authorities should have consulted local people and taken them in confidence while surveying for the sanctuary demarcation," says Urgain Rangdol of Koyoul village. "The areas apart from the 'biological hotspots' will be excluded during the process of settlement of rights," says Jigmet Takpa, a conservator with the wildlife department in Ladakh. But many including the nomads are not convinced.

On March 13, people from Changthang sub-division, including members from Ladakh Autonomous Hill Development Council (lahdc), met the district magistrate seeking withdrawal of the plan. They argued protected zones would deny them access to the region's resources. The authorities asked them to constitute a committee and come up with recommendations.
"The sanctuary is intended to benefit those in the tourism business. They have nothing to lose like us," says Tsering Angchuk from Chushul.

The Changpas accuse the thriving tourism business and the military activities near the line of actual control of harming the fragile ecology of the region. "We always co-existed with the wildlife and with the army who dump waste and set up buildings near lakes," says Stobgais."The biodiversity of the Changthang rangeland is facing threats from tourism, the army and paramilitary activities," agrees Takpa. The Changpas allege that the activities threatening the fragile ecology of Changthang have continued unabated despite the act having been in place for over 25 years.

During their visit, cec members had witnessed several disturbing human activities including motorised boating and contraction works. "The Supreme Court had asked the army to remove a guest house, steamers, an eco-tour unit built at the lakeside by Ladakh Ecological Development Group, a tourist bungalow and a community building in the nearby Spangmik village," says Takpa. cec is visiting Changthang in the coming summer to carry out a further survey and the Changpa nomads hope the administration will listen to their concerns.