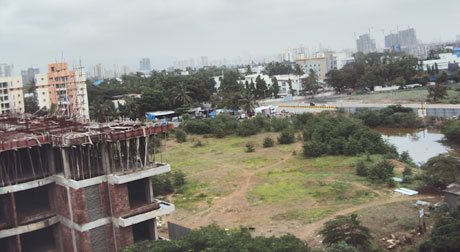 It has been six years since the July 26 deluge, but the fear of flood during monsoons still lingers among Mumbaikars. Especially among the residents of Mumbai’s western suburbs who have been facing severe waterlogging for the past six years. The city municipal corporation claims to be well prepared this year; it is cleaning all the stormwater drains. Residents of Char-kop in Kandivali West, however, believe restoring a 50-year-old lake can end their worries.

Since 2006, people from over 10 societies around Lake Charkop have been campaigning to save the waterbody which, they say, can absorb the extra runoff during monsoons. The lake acted as a natural drain for the area before it was encroached for housing projects in 2005. “This leads to waterlogging and flooding every year during monsoons,” says resident Reji Abraham, who is heading the campaign. The lake is a natural ecosystem and helps maintain the ecological and hydrological balance of the area, according to the Bombay Natural History Society (BNHS).

In 1974, the state leased the two-hectare lake for 30 years to a society of potters, called Kumbhar Kala Industrial Society, to make clay pots. Kumbhars, or potters, use wet mud from marshlands for their work. But the society never used the land. In 2004, 1.8 hectares (ha) was leased again to the society, under the name of Kumbharkala Cooperative Housing Society Limited. The remaining 0.2 ha was given to two private housing societies, Sagarmata Cooperative Housing Society Limited and Laxmannagar Cooperative Housing Society limited. The three societies started filling the lake with debris for construction work in 2005. During the 2005 deluge, the area surrounding the lake was filled with three-feet high water. “At that time the lake was 50 per cent filled,” says resident Sunil Gole. Following protests by the residents, the builders temporarily stopped work in 2006.

In April 2009, Abraham, president of local non-profit United Association for Social, Educational and Public Welfare, filed a public interest petition against the state and the developers in the Bombay High Court, saying encroachment on the lake increases risk of floods. The defendants said the lake could be filled as it is not a natural waterbody, a claim that Asad R Rahmani, director of BNHS, dismisses. “The lake was once a paradise for fishers,” says Rahmani.

The defendants showed official records that said the lake bed is a deep pit that gets filled by the runoff coming from surrounding highlands. “The Brihanmumbai Municipal Corporation (BMC) even diverted industrial effluent to the lake to prove that it is part of a nullah,” says resident Mukesh Mistry. People now live in constant fear of outbreaks of malaria and dengue, he adds. Four months later, the court ordered the developers to construct a stormwater drain near the site. “The judgement did not tackle encroachment,” says Abraham. “Worse, instead of the builders, BMC built the drain at the cost of Rs 50 lakh using taxpayers’ money,” he explains. The drain was completed early this year. Abraham filed two RTIs enquiring into the matter, but is yet to receive a reply. “BMC has done nothing to protect the lake,” Gole says. BMC officials refused to comment on the matter. At present, the lake is almost 80 per cent dry. Mistry says, “The residents are using borewell water as supplementary source.” He points out if the lake is conserved, “it can help tackle the problem of depleting groundwater in the area”. The groundwater is saline due to its proximity to the sea, says Sandeep Adhyapak, a practising rainwater harvesting consultant in Mumbai. “Recharge of groundwater through lake systems can help improve the groundwater quality.”

Despite continuing protests, two housing projects are almost complete. But residents of Charkop have not given up hope. Abraham is thinking of moving the Supreme Court.