Origin of the relentless strife in Bodoland lies in a series of blunders, right from colonial times 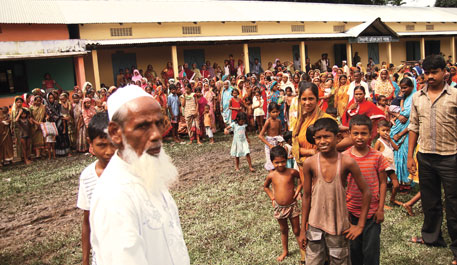 Lush green paddy fields surround Bangaldoba Part II, a small village of about 250 households in Assam’s Kokrajhar district. On July 23, a murderous mob attacked the village of Bodo tribals, reducing it to charred rubble. “Thousands of Muslims came on foot and by boats and surrounded us from three sides. We did not know who they were, but they torched everything on their way,” recalls Laisan Bramho, a 38-year-old farmer of the village. He narrates the incident as he makes his way into his courtyard where tin sheets lie heaped on piles of burnt timber and bamboo. They did not even spare the trees, Bramho says, pointing to a few areca nut trees, chopped down to a third, their leaves crumbled by the heat from the houses set ablaze.

About 50 kilometres away in neighbouring Chirang district, about 3,000 people from three villages have taken sanctuary in a madrasa in Chatipur village. They fled on July 25, when about 100 men with automatic firearms attacked their villages, Chatipur, Bortola Part I and Bortola Part II. Abdul Sattar Talukdar, 51, ran away with his five family members, abandoning his homestead and 1.5 bighas (8.7 bighas make a hectare) of farmland. Talukdar says that even before the riots started, there has been a lot of pressure on the Bengali Muslims in the area to sell their land and move out of the villages. “We live in constant fear of the Bodo militants. They threaten and extort money from us. Those who don’t pay are beaten up, and sometimes killed.”

Kokrajhar and Chirang are part of Bodoland Territorial Autonomous Districts (BTAD), an autonomous area for the Bodo tribals created in western Assam under the Sixth Schedule of the Constitution . The region is a tinderbox that needs only a spark to implode. The past two decades have seen at least four bloody and violent confrontations between the Bodo tribals and Bengali Muslims, considered illegal immigrants from Bangladesh. 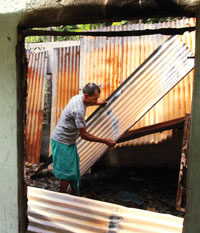 A report by non-profit Norwegian Refugee Council published in November 2011, This is Our Land: ethnic violence and internal displacement in north-east India, estimates that close to 0.5 million people were displaced between 1993 and 1998 in three different violent events, all involving the Bodo. Of these, close to 50,000 are still living in refugee camps and need rehabilitation. In 1993, the violence between the Bodo and Bengali Muslims had claimed about 50 lives and displaced about 250,000 people. This time, the riot which erupted in mid-July, had claimed 65 lives and displaced 400,000 people till the time this magazine went to print.

The genesis of the violence in ethnically-sensitive western Assam, BTAD in particular, lies in a series of historical blunders, right from the colonial period to bad policy decisions in recent times, favouring a particular community.

In the 19th and early 20th century, policies of the British administration on land utilisation and settlement of people brought from outside Assam to work in tea plantations and farmlands led to massive demographic changes in the region (see ‘Bodoland incursions’). But more recently, social scientists point out, giving territorial autonomy to the minority Bodo community with scant regard for the majority, which includes Muslims, Adivasis, Koch Rajbongshis and Assamese, seems to have been the main reason for the violent discords that erupt time and again.

Since the 1960s, there has been a demand for a separate state of Bodoland after regulations failed to protect the Bodo from land alienation (see ‘Alienated time and again’).

The demand for a separate state gained wide currency only in the late 1980s, when the All Bodo Students Union (ABSU) took up the issue and paralysed western Assam for almost half a decade. “Divide Assam 50-50,” was their slogan.

In 1993, the protests led to a bipartite agreement between ABSU and the Assam government, which paved the way for the creation of the Bodoland Autonomous Council, a self-governing body. Villages with over 50 per cent Bodo population were to be ruled by the council. To create a contiguous territory, even villages with less than 50 per cent Bodo population could be added to the council area. However, its territory was not precisely demarcated, leaving room for confusion. Lack of financial powers to the council and constant interference by the state government on subjects that the council was to handle meant that the accord never got implemented.

By 1994, the political setup, ABSU, which hoped to rule Bodoland revived the demand for a separate statehood. Two separatist outfits, the militant Bodo Liberation Tigers (BLT) and the National Democratic Front of Bodoland (NDFB), also came into being and joined the struggle. 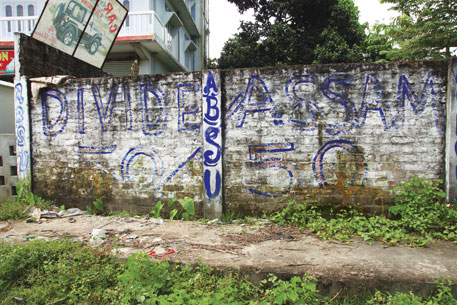 Nani Gopal Mahanta, professor of political science at Gauhati University in Guwahati believes that the 2003 Accord, instead of laying the foundation for peace, created more trouble in western Assam. Mahanta argues that the premise on which BTAD was formed is erroneous. The main objective of the treaty, as mentioned in section 2, states that creation of BTAD is “to fulfil economic, educational and linguistic aspiration and preservation of land rights, socio-cultural and ethnic identity of the Bodo”. This implies that the only agenda of BTC was to benefit the Bodo who are not the majority of the population in the autonomous area. The Bodo only form a majority of the Scheduled Tribe (ST) population in BTAD. This is when, according to the 2001 Census, the STÃ”Ã‡Ãªcommunity in the autonomous area was only about 35 per cent, with Baksa district of BTAD having the highest of 38.10 per cent.

BTAD was also created in an arbitrary way. The criteria were similar to the 1993 Accord. All villages with an ST population of over 50 per cent were to be part of BTAD to create a contiguous area. To create this mini state within a state, the borders of close to a dozen existing districts were redrawn and two new districts were created. To do so, the Sixth Schedule of the Constitution was amended. BTAD has four districts—Kokrajhar, Chirang, Baksa and Udalguri, comprising 2,890 villages.

Bhupen Sharma, director of Omeo Kumar Das Institute of Social Change and Development (OKICDC), a social research organisation in Guwahati, says although BTAD was formed by amending the Sixth Schedule, it goes against the spirit of the Constitution. The Sixth Schedule envisages protection of tribal land by forming autonomous districts where tribals are in majority. In the case of BTAD, the map of the state had to be redrawn to create an area from several districts. Even then the population that it sought to protect does not form a majority, Sharma says. His institute conducted a sample survey in 300 villages in Kokrajhar for the Ministry of Minority Affairs and found that only 37 per cent of the population belonged to ST communities, while 49 per cent were of general category. 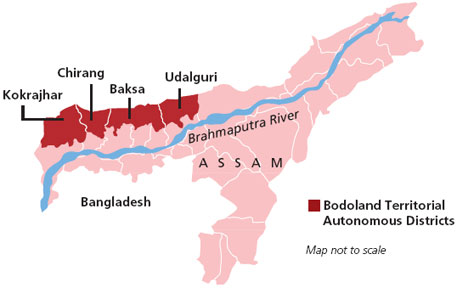 Now, there is a strong perception among the Bodo leadership that land in BTAD is slowly being encroached by illegal migrants from neighbouring Bangaldesh. During their recent visits, BJP leaders, including L K Advani, talked about the growing cases of encroachment by Bangladeshi immigrants on the forest and revenue land of Bodo tribals. This is far from the truth says Akhil Ranjan Dutta, professor of peace and conflict studies at Gauhati University. “Encroachment is more of a perceived threat than a reality. There could be a few cases of incursions by illegal immigrants, but it is not changing the demographic of BTAD,” he says.

A senior BTAD official disagrees. Illegal immigration may have stopped after the formation BTAD, but enough harm has been done prior to 2003. When BTC was formed, right to ownership of land should have been made with retrospective effect. Since the 1950s, a steady stream of migrants has been flowing to Bodo areas, pushing out native population, he adds.

Bodo tribals also complain that the 2003 Accord does not adequately protect their land. It allows anyone owning land prior to 2003 to buy, sell, transfer and inherit. Derhasat Basumatary, executive member of BTC, says illegal migrants have managed to buy land and also encroach on government land because it is hard to ascertain who was living here before 2003. But Muslim communities allege that the land price has been kept abysmally low because the authorities do not allow them to sell land to people other than the Bodo. Surat Ali, who has been trying to sell his land and move out of BTAD, says, “I have been offered a maximum of Rs 1 lakh for my seven bighas (0.8 hectare), while the market value is at least Rs 4 lakh.”

Farmers at a crossroads

For long, farmers in Assam follow a practice, called adhi in Assamese or Bodo dialect, according to which landed farmers lease their agricultural land to farm workers who cultivate in exchange for half the produce. The other half is given to the farm owner. Bikas Bramho, 26, a resident of Nilibari village in Kokrajhar, says farm workers from the neighbouring Khujiabasti village, a Muslim settlement, usually work on their fields. Laisan Bramho whose house in Bangaldoba Part II was burnt down during the recent violence says he had employed four to five Muslim farmhands on his 5 acre farm.

Dutta concurs, sometimes Bodo families also invite Muslim families to stay on their fields as tenants and cultivate the land. “So much so, lately there has been a trend of renting out fruit bearing trees to Muslim families,” says Dutta. Once the trees begin to flower, the Bodos lease the tree out for a certain sum of money. Once the fruits appear, the person can harvest the produce and sell it in the market.

The riot seems to have hit every one hard. Abdul Hamid who is sheltered in a relief camp in Mazrabari in Chirang after his house was burnt down feels helpless. The 56-year-old farmer used to work as a farm hand to eke a living. When times were good, his farming skills would get him about 200 kg of rice a season. Half of it would be used to feed his family while a rest would be sold in the market. “I generally manage to save about 100 kg of rice per season. I sell it after a year because old rice does not stick to each other once cooked and fetches a better price,” he says. But after the violence there is no rice left in the house. It is a double whammy for Hamid since he will not find work on Bodo field and his granary has been burnt down to ashes.

Little socio-economic study has been done in BTAD. Even the government of India’s socio-economic caste census of this area is not complete. The only study that gives an indication of the socio-economic pattern in this area is the sample survey by OKICDC. Of the 300 families surveyed, 11.2 per cent of Muslim families were landless. Compared to this, 6.1 per cent Hindus and 8 per cent Christians were landless. But when it came to ownership of agricultural land, a solid chunk of 45.3 per cent of Muslim families owned no land compared to 34.1 per cent Hindu families and 31.8 per cent Christian households. The average agricultural landholding in the state is 36 per cent.

It is a misconception that illegal immigrants have taken away the land of the Bodo tribals. Government policies during the colonial period and after Independence have led to land alienation among the Bodo. But trying to rewrite history with violence will not be to anybody’s advantage. Without the skilled Bengali Muslim farmers, the Bodo’s harvest will dwindle. Abdul Sattar’s loss also means a loss for Laisan Bramho.