The entry of large business houses into the Sundarbans is not only jeopardising the interests of local fisherfolk, but also causing major ecological damage. 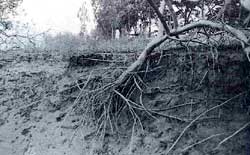 THE TREMENDOUS surge in prawn farming, fueled by the high prices they fetch abroad, is threatening ecological disaster for the Sundarbans, a fragile area of mangrove swamps in West Bengal.

The harm from all this includes erosion of the complex system of mud dykes that protect the Sindarbans from the onslaught of the sea, destruction of the mangrove trees whose roots are essential to bind the mud dykes and the taking of a heavy toll of fish seedlings, which will adversely affect the delta's fish population.

The dykes rise 1 metre above the high-water mark and are 3-4 m above the river's foreshore level (the first part of the river bank).

Says Tushar Kanjilal, secretary of the Tagore Society for Rural Development at Rangabelia in Sundarbans, "These are the thin strips of land that stand as the final protectors of some three million people. At some places, parts of the dykes have already fallen apart and water rushes in at high tide. At many other sites, dykes are on the verge of collapsing.

"Constant treading on mangrove roots to collect prawn seedlings injures the roots and slowly destroys the trees. In every dragnet, hundreds of other fish seedlings die. If this continues, natural breeding of fish in the river Ganga may decline sharply, reducing the supply of fish to the rest of the state."

Veteran fishermen have plumped for destructive fishing techniques as well. They use fine nets which, when dragged through the water, obstruct the natural flow of silt through the mouth of the river. As a result, these get blocked. "Floods or tidal waves, diverted from their natural courses as a result of blocked river mouths, can sweep entire villages away," says Kanjilal.

The prawn collectors then pull out the nets and separate tiger prawn (bagda) seedlings from other tiny fish and collect them in small vessels. The remaining seedlings are dumped on land, where they die. The depletion of other fish could put a lot of fisherfolk out of work in 10-15 years, Kanjilal warns.

Tiger prawns from the sea lay their eggs at riverside embankments and at the roots of mangrove trees. When the eggs hatch, the tiny micro-seedlings are caught in fine nets and taken to hatcheries. Tiger prawns fetch upto Rs 800 per kg in the international market and about 70,000 people depend on them for their livelihood.

The Sundarbans covers 9,630 sq km, of which a little over half is inhabited. There are several estuarian salt-water rivers that emerge from the Ganga and enter the Bay of Bengal. Fishing is the main source of income on the Sundarbans islands because agriculture is impossible owing to a lack of sufficient fresh water. The Sundarbans also provides fuelwood, timber, food and honey and shelter against cyclones that occur in the area frequently.

To counter the threat to the dykes, the social forestry division of the state forest department is building bamboo cages and spurs to retain the soil along the embankment. So far, only about 6 kms of the embankment has been brought under protection, at a cost of Rs 1 lakh per km, but these have been largely ineffective as many have either been washed away or have fallen apart.

Kanjilal offers another solution. The fishermen should form cooperatives and be taught scientific methods of prawn farming. For instance, pools that are 4 metres deep can be dug just behind the embankments and connected to the river through sluice gates. Prawn seedlings can then be collected in a planned and sustainable manner and reared scientifically in the pools. This would reduce damage to the dykes in the long run; but, Kanjilal categorically rules out a ban on prawn fishing because "thousands of lives depend solely on it".