New Delhi struggles with a policy to regulate e-rickshaws 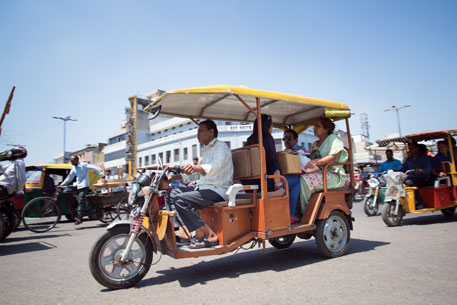 Every Friday evening, traffic in Govindpuri area of South Delhi comes to a standstill. Street vendors occupy an entire stretch of the road leading to the Govindpuri Metro Station as they set up stalls for the weekly market. Shriram Mahato, a second-generation migrant from Ranchi, is least bothered about the chaos, and casually turns on the radio, neatly kept inside the carrier of Sarthi, his battery-operated rickshaw. “Autos and taxis dread taking this road when it is crowded, but I am free to go anywhere without the fear of getting fined,” Mahato says, pointing to a blank licence plate in the rear of his four-month old tricycle.

What works for Mahato is the confusion between Delhi Transport Authority (DTA), which registers motorised vehicles, and the Municipal Corporation of Delhi, which registers non-motorised vehicles, on the status of the electric rickshaw, popularly called e-rickshaw. This is primarily because the Delhi government has no policy on battery-operated rickshaws to classify them as motorised or non-motorised vehicles. It is for this reason Mahato neither has insurance nor a driver’s licence. Like him, thousands of unlicensed e-rickshaw drivers continue to ferry passengers in Delhi.

While no Act governs non-motorised vehicles, motorised vehicles across the country are under the Motor Vehicles (MV) Act, 1988. One of the provisions of this Act states that any vehicle consuming more than 250 Watts (W) of electricity is a motorised vehicle. Those driving e-rickshaws claim their vehicles consume less than 250 W. However, a 2012 study by the Delhi government, in collaboration with the city-based non-profit TERI, showed that all the 53 e- rickshaws examined consumed 600 W to 1,000 W of electricity, which is on a par with motorised vehicles. The study also stated that all the rickshaw parts were imported from China and assembled in the city. As there was no authority to certify the imported parts, there was no guarantee on their safety.

Neither here nor there

On March 19, 2014, following a petition by social worker Shahnawaz Khan demanding a ban on e-rickshaws, a Delhi High Court Bench criticised the state government for the lack of law to bring these rickshaws within the regulatory framework. During the hearing, a senior transport official said e-rickshaws did not come under the purview of DTA, while the Municipal Corporation of Delhi refused to take the responsibility of registering the e-rickshaws, saying they are motorised vehicles. The Bench has ordered the Delhi government to frame a policy on e-rickshaws by May 21.

The Battery Operated Rickshaw Welfare Association, one of the many e-rickshaw operators’ unions in the city, has filed a petition against the proposed ban, saying it will directly affect the livelihood of over a hundred thousand operators. Gurmeet Singh, member of Battery-operated Rickshaw Chalak Union, says the government should promote e-rickshaws as they are environment-friendly. He, however, adds that those e-rickshaws consuming more than 250 W should be banned. Singh, who is opposed to a blanket ban on e-rickshaws, does not drive one but rents it out.

The Delhi government introduced e-rickshaws in 2009 ahead of the Commonwealth Games to facilitate easy commuting to and from the venue of the Games. Because of its popularity, the vehicle was also introduced in tourist spots such as India Gate. The tricycles were seen as the next step in developing a multi-modal transport for the city. “Along with the streamlining of the auto-rickshaws and CNG vans, e-rickshaws are supposed to offer last-mile connectivity to the commuters,” says an official from DTA. A few years down the line, Delhi has witnessed a spurt in the number of e-rickshaws.

After the 2012 study, the Delhi government started regulating the sale of e-rickshaws. In December that year, it issued an order asking e-rickshaw dealers in the city to register themselves with DTA, which would help the government to keep a track of the imported parts and also to check the energy consumption. But once the order was passed, dealers started using satellite towns around the National Capital Region, such as Agra, Hissar and Bulandshar, to assemble the imported parts. The transport official says that the dealers do the assembling outside the municipal limits of Delhi and sell the vehicle with Indian names such as Sarthi, Mayuri and Shikara.

In March this year, Delhi’s Lieutenant Governor Najeeb Jung issued a notice asking all owners of e-rickshaws to register their vehicle under the MV Act in six months and to get trade licences within three months. The dealers have also been asked to get the vehicles certified from either the Vehicle Research and Development Establishment in Ahmednagar, Maharashtra; the Automotive Research Association of India, Pune; the Indian Institute of Petroleum in Dehradun; or the International Centre for Automotive Technology, Manesar, on issues related to energy consumption and safety.

“Khan, who is my client, established through RTI that not a single e-rickshaw has been approved by any of these organisations, but they continue to ply,” says Delhi High Court advocate Sugriva Dubey. Abhijeet Gupta, a dealer based in Chittaranjan Park, says there is no violation of the government order. “We simply assemble the parts. Now we have started fitting batteries to vegetable carts, ice cream vending carts and even small push carts,” he adds. Officials say that a policy to regulate the e-rickshaw is in the making.

No respite for drivers

Khan’s concerns are reflected in the situation of Radheshyam, a middle-aged man who now drives an e-rickshaw. “If I do not pack my rickshaw with eight passengers in one trip, I will not have enough to pay for the rent,” he says. Radheshyam’s owner sold off most of the cycle rickshaws he owned and bought three e-rickshaws. Radheshyam pays a rent of Rs 200 to Rs 400 per day and is left with a meagre Rs 300 every day to manage his family of four. The only comfort for Radheshyam is that he does not need to do much physical labour with the e-rickshaw.

While New Delhi is still struggling with a policy, Tripura in January 2014 passed a law to regulate e-rickshaws, becoming the first state in the country to do so. According to the state’s Urban Development Minister Manik Dey, battery- operated rickshaws, or tuk tuk as they are locally called, have been popular in capital Agartala since 2012. “With about a dozen dealers selling these rickshaws, we felt the need for regulation,” he says. In December, amendments were made to the existing Rickshaw Regulation Act to accommodate these rickshaws within the legal framework. Interestingly, unlike the Delhi lieutenant governor’s order asking e-rickshaws to get approval from various automotive research institutes, the new law in Tripura asks dealers to get their vehicles certified from the state-run Tripura State Electricity Corporation Limited. The eligibility criteria for e-rickshaw drivers as mentioned in the Act includes 20 years as the minimum age, passing a driving test and getting a licence, which will be issued by local municipal corporations or block offices. Tripura government, however, has not brought these vehicles under the MV Act.

Over the last couple of years, a few other states in India, such as Haryana and Uttar Pradesh, have distributed e-rickshaws to the economically poor section of society as a poverty-alleviation measure and to promote eco-friendly transport. But none of these states has framed any guideline. E-rickshaw dealers in Delhi say that the vehicle will become the future mode of transport as oil prices continue to rise. It is time the government formulated a policy to regulate this eco-friendly public vehicle.