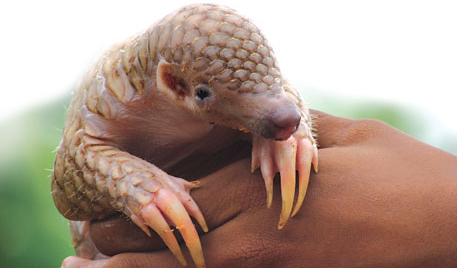 ON THE third Saturday of February, the World Pangolin Day, the Internet was flooded with images and videos of a scaly creature, arousing curiosity of many. While some said it was an armadillo, others were amazed to find that the character from animation series Pokemon was a real animal. Unfortunately, the world’s only scaly mammal could go extinct before most people realise it exists.

Called bajra keet or bajra kapta in Hindi, pangolin is a harmless nocturnal animal with no teeth. It is about the size of a civet cat and lives mainly on ants and termites. Its sticky tongue, which is longer than its body, is specially adapted for reaching and lapping up insects in those deep crevices. To tear open the anthills or termite mounds, it uses the powerful forelimbs that are armed with three disproportionately long claws. In sharp contrast, the hind legs have tough soles and short, blunt nails on the five toes. Though harmless, a pangolin knows how to protect itself. Most of its body parts, except the lower body and face, remains covered with overlapping scales, made from keratin. In the wild, a pangolin curls up into a tight ball as part of its defence mechanism against predators, such as tigers and lions, with the hard keratin scales functioning as an armour. 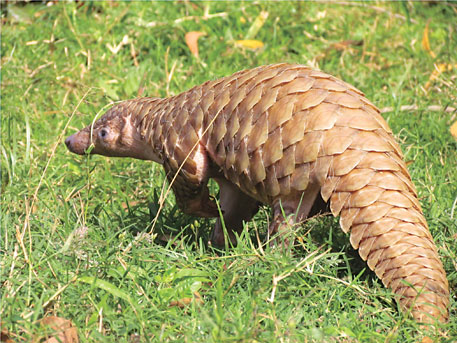 Its keratin armour is, however, useless against poachers who covet the scales. The animal with poor vision is usually shot at or caught by snares, traps and nets.

The anteater is in high demand both for its meat and scales in East and Southeast Asian countries, particularly China and Vietnam. Like many other wildlife products, the scales and meat of pangolin are considered to have therapeutic properties and are used in traditional Oriental medicines. Though lacking any scientific evidence, they are known as a tonic food and are given to lactating women. They are also believed to cure ailments ranging from asthma and psoriasis to cancer. Some believe that rings made from pangolin scales can cure piles. Such superstitions still exist in eastern Indian states, such as Odisha. Communities in the region often observe shikharutsav when the pangolins are ritualistically hunted for meat.

Pangolin meat is also considered a delicacy in other countries. In Vietnam, the animal is kept caged in restaurants and is slaughtered as and when a customer orders the “dish”. There have also been reports of pangolins being boiled alive. Reports also show that consumers often request draining the blood of pangolin separately and provide it in a doggy bag. The blood is considered to have therapeutic properties and is relished by some. There are others who relish keratin scales boiled into a soup. There is also a growing demand for keratin scales in manufacturing boots and shoes. Media reports and government estimates show that at least a million pangolins have been killed worldwide in the past decade alone. 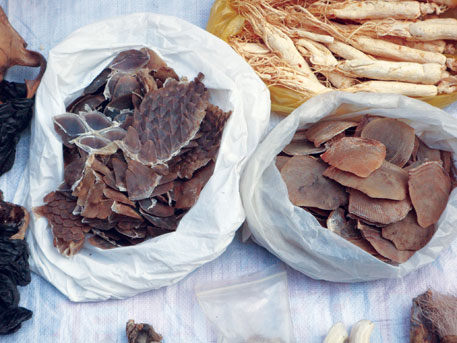 Today, all the eight pangolin species, four each in Africa and Asia, are threatened. The International Union for Conservation of Nature (IUCN) lists six pangolin species as “endangered” and two as “critically endangered”. Of the two species found in India, the Indian pangolin (Manis crassicaudata) is endangered and is found sporadically throughout the Himalayan foothills, the northern plains and southern India. The Chinese pangolin (Manispentadactyla) is found mostly in the northeastern states of India and parts of Southeast Asia. IUCN has recently bumped its status up to “critically endangered”, a step away from “extinct”.

Realisation: too late, too little

Given the level of poaching of Asian pangolins, the 11th meeting of the Conference of the Parties to the Convention on International Trade in Endangered Species (CITES) in 2000 proposed transferring all the four species from the list of species not threatened with extinction to the list of species threatened with extinction. This would have meant a ban on all trade in pangolins for commercial purpose. Parties instead decided to establish “zero export quotas for wild caught specimens traded commercially”, making the trade in Asian pangolins illegal. 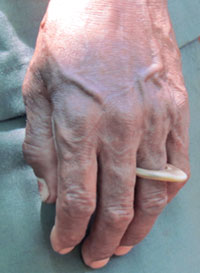 When the aforementioned proposal to CITES was put forth, Parties were given a grim warning—“Given the level of trade that appears to be occurring in other Asian pangolin species, it is reasonable to assume that these species would soon become rarer and more difficult to obtain, and that the trade would shift to the Indian Pangolin.”

To safeguard its pangolin species, India has accorded the highest levels of protection under the Wild Life (Protection) Act of 1972 to both the pangolin species found in the country. A person caught poaching pangolins or in possession of its scales could face imprisonment for three to seven years and is liable to pay a fine of not less than Rs 10,000 under the Act. But this may not be enough. There seems to be a growing demand for the body parts of Indian pangolin species in the international market, with traders targeting areas as far as the interior peninsular region. According to the India chapter of wildlife trade monitoring network TRAFFIC, seizure reports from the country suggest that between 2009 and 2013, over 3,000 pangolins were hunted. Media reports state that during the period, approximately 5,000 kg of pangolin scales were confiscated in 25 seizures. Each pangolin has an average of 1.5 kg of scale, which means 3,350 pangolins might have been poached for the seized scales. And this is just a conservative estimate. In early February, the Nagaland state police apprehended a woman from Manipur carrying 10 kg of pangolin scales on her way to Myanmar.

Unfortunately, only fractured information is available on Indian species. This shows there is an urgent need for a national level study to estimate their population and geographical distribution. Shekhar Niraj, head of TRAFFIC (India), sums up the problem when he says, “Losing pangolins would be a major blow to conservation for two reasons—pangolins are harmless and docile but they suffer a gruesome method of illegal harvest. Secondly, the rate of harvest is perhaps historically unprecedented, indicating the helplessness of conservationists. We are on the edge as never before.”

Shaleen Attre is programme officer with TRAFFIC (India). Views expressed in this article are those of the author