Leading the battle against the bottle

Several regional organisations are helping women fight against the sale and consumption of liquor.

Leading the battle against the bottle 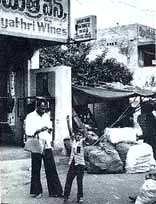 RECENT newspaper reports have illuminated a very different facet of alcoholism. Agitations spearheaded by women against their alcoholic husbands, which have quite frequently, successfully got them out of their addiction, are making headlines in many states. And, a number of organisations are helping the women in their bold endeavour.

The Tehri Mahila Samakhya (TMS) has been working with women for the last two years in the Tehri Garhwal-Uttarakhand region, where alcoholism has in its vice even children, who are even willing to steal in order to sustain their addiction. TMS workers found that the problem of alcoholism cannot be solved by merely getting liquor shops closed because when one shop is forcibly closed down, it is only a matter of time before others spring up. And, instead of marketing liquor in bottles, clever traders sell it in pouches, similar to those in which milk is sold, which are convenient to carry and easily hidden from the women's eyes.

To solve these problems, TMS organised a workshop in the area on the theme, The Political Economy of Liquor. Abha Bhaiya of Jagori conducted the workshop, which exposed the politician-liquor baron nexus, and showed how actually, it is the politicians who own the liquor shops. The shopkeepers are merely given licences to sell liquor, and are consequently least concerned about its harmful effects.


Disha, another women's group, works in the villages of Saharanpur district in Uttar Pradesh. A lot has been reported in the print media about the Pather dharna, which was a three-month agitation where hundreds of women laid siege to a country liquor shop in an attempt to close it and to force the government to stop giving licenses to any more liquor shops. While the women were peacefully marching through Saharanpur, the police started a lathi-charge in which several women were wounded. Despite this, the agitation continued. The determination of the women finally paid off when UP governor Motilal Vora ordered the closure of the liquor shop. Spurred by their success, the women now plan to launch a full-scale agitation against alcohol.

In Andhra Pradesh's Nellore district, village women, inspired by the stories they read as part of the government-funded literacy programmes, joined hands to put an end to the arrack business in the region. The women picketed the arrack shops, forcing the shopkeepers to down their shutters. So successful were the women that the government was forced to call off the annual liquor auction. Mita Radhakrishnan of Jagori says the agitation was a spontaneous reaction from the women.

The Arya Samaj has a separate wing for the rights of women, which has branches in Uttar Pradesh, Haryana, Rajasthan and the rural areas around Delhi. Village-level agitations have been started to prevent further sale of liquor, and the workers have found women are increasingly participating in agitations that aim at persuading their men to give up their harmful drinking habits.