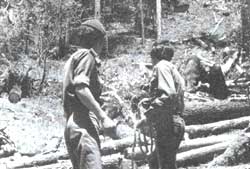 A PROPOSED revision of the Indian Forest Act of 1927, by the ministry of environownt and forests (MEF), has become the focus of a controversy. Non-governowntal organisations say the MEF'S propmed kgislation - to be called the nservation of Forests and Natural ystems Act - does not do much for munity participation in the manent of forests, and demand a public ussion on the bill, which has been uded in secrecy.

Environment minister Kamal Nath, er, says, "To comment on the bill be premature. We are still work towards an acceptable draft. As soon it is ready we will discuss it with the . as their input is essential." ugh Nath said it would take more months for the ministry to -an acceptable draft legislation", agreed to discuss the issue with the at a national seminar to be held at end of October - a proposal that was earlier turned down by the ministry on the ground that the draft legislation was a secret document. The NGOS used this assurance to make the MEF Commit Rs 4 lakh to the seminar.

The NGOs, however, feel that Nath's assurance was only an attempt to stem a public outcry. Immediately after the bill was leaked out in May this year, the MEF set up' expert groups, under the aegis of the Ni-w Delhi-based Indian Social Institute (isi), to examine the critical aspects of the bill - especially community participation in decision-making and the recognition of community rights - and suggest an alternative draft bill.
Madhav Gadgil of the Centre for Ecological Studies, Bangalore, is currently working on an alternate draft bill called the "Peoples' Bill", which seeks public control over forests. The MEF'S draft bill, on the other hand, clearly wants to confer more powers on the Central government. Says an MEF Official,,"There are a number of different Acts and state legislations. All these will have to be brought under a comprehensive legislation. The revised bill hopes to achieve this by harmonising these laws and broadening the scope of the 1927 Act, which had a very narrow focus." Says ecological historian Ramchandra Guha, "This is a very state-oriented piece of legislation, which seeks to considerably slow down and perhaps even reverse the trend of greater popular participation in forest management."

Provisions created for peoples' management have, however, been simultaneously circumvented by other clauses. isi's Walter Fernandez points out that the representative body will be completely subservient to the will of the forest department, as it will execute management plans prepared by the department. The bill vests state governments with the power to make the rules and "may prescribe the manner in which the management plan for such forests shall be prepared and executed".

Besides, the draft states that the state may take over the village forests if the forest department is "satisfied that the local bodies are either unable to protect the village forests or abide by the management plan prescribed for it". And, under the proposed bill, reserve forests cannot be converted into village forests - a restriction that is not present in the 1927 Act. "This will ensure that only a limited area is available for the possible constitution of village forests," says Guha.


What might prove to be even more regressive, feel critics, is that peoples' rights will be reviewed from time to time and limited to the carrying capacity of the forests. Points out Ashish Kothari of Kalpavriksh, "This notion of carrying capacity is a notoriously difficult one to apply to the field, and, having left it undefined, the bill is giving forest departments vast discretionary powers."

The bill has also drawn flak for ignoring certain communities that are dependent on forests and for disrupting their livelihood. It seeks to restrict shifting cultivation as far as possible and towards that end, vests the state with the power io declare as "agro-forests", areas of shifting cultivation area that are listed for protection. The state will then appoint a committee to settle rights of the shifting cultivators "as it may deem necessary". A maximum of 3 years will be allowed to stop shifting cultivation in areas where a ban on such practices is to be imposed. "The bill makes no provision for the recovery of livelihood and does not deal with the causes of deforestation, laments Fernandez.

Guha points out that, according to the bill, anyone claiming rights, in reserve forests must be from a village that has a contiguous boundary with such forests. This discriminates against nomadic pastoralists, he says. Nor is there a provision for supplying raw materials to forest-based artisan communities, Guha adds.

Besides stifling the possibilities of decentralised management of forests, of India's Constitution, fear c Environmental lawyer Rajiv Dha says, "The proposed bill is a corn triumph of over-centralisation. comes at a time when decntrali as enshrined in the Panchay (Amendment) Act, is the order day." Under the bill, the Centr ernment can direct state govern to declare areas as reserve forests. the Central government's permisswe essential for granting licenses to based industries and for extra, industrial raw material.


The clause that provides for a strinp review of commercial exploitaticom forests has, however, been welcomed environmentalists. There is, neverd less, uncertainty over the impact of village forest development fund, is to be created out of the tax le timber and other commercial too produce and is to be used for the pron tion and regeneration of forel According to the bill, the state gov" ment will exterid loans from this fund the local bodies, which are to be rto ered from sale of forest produce. I Ashwinil Chhatre of isi points out. not mqntioned whether the subsism requirement of the local population't be prioritised over or ordinated to the sak forest produce for recovery of loan." Boud these provisions ml turn out to be red rings. Says Chhatre, policy on industrial tation is already on anvil."

The furore over proposed bill is uncMa reminiscent of a III attempt by the gowl ment to revise the III Act. The move was abg doned when it drew 4 for ignoring the resoa rights of people. the government agreed to discuss the so bill with the NGOS, Do wan says, "The shs learn its lessons bt environment decisions put up for political financial auction."