By maintaining terrestrial forestation to improve the soils, drylands can be saved from being further degraded 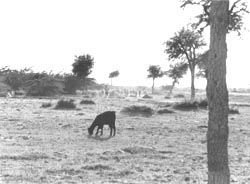 with the advent of the 21st century, it has become increasingly clear that drylands of the world will be subjected to even greater land use pressures as a result of the continued population growth. This is because the carbon balance of terrestrial ecosystems is particularly sensitive to the impact of human activities like deforestation, biomass burning, land use changes and conversion, and environmental pollution. In the drylands particularly, there is a need to preserve or induce carbon in the soil by extensive afforestation suitable to the region.

Deciphering the role of terrestrial ecosystems in the global carbon ( c) cycle has, therefore, become increasingly important in view of the global environmental change, particularly controlling land degradation and climate change. Four main reservoirs regulate this cycle on earth: fossil carbon, the oceans, the atmosphere and terrestrial systems that include soils and biomass. Although the soil-vegetation carbon pool is relatively small compared with that of the oceans, potentially it is much more labile (liable to change in nature, form, or chemical composition) in the short term. The most important natural processes that occur in the exchange of carbon are photosynthesis and autotrophic respiration (carbon dioxide production by plants) and heterotrophic respiration (essentially microbial), which convert the organic material back into carbon dioxide ( co2).

The amounts and dynamics of carbon and nitrogen ( n) in the world's soils are still relatively poorly known. Of particular interest is the 'missing sink', which arises in global carbon budgets from the difference in co2 released by fossil fuel combustion and the annual co2 increase in the atmosphere. Part of the 'missing carbon' has been attributed to ' co2-fertilisation effect', associated with increased atmospheric co2 levels on plant growth. On the whole, the natural resources for food production have shown a marked deterioration during the last two decades; land has been degraded, water resources have been depleted, desertification has increased, biodiversity has decreased, and there have been negative impacts on human health.

Drylands occupy about one-third of the Earth's land surface and are inhabited by about one quarter of the world's population. The United Nations Conference on Environmental Development at Rio de Janeiro in 1992, highlighted desertification as a special problem with marked political and technical dimensions.

Drylands are characterised by low, erratic, and infrequent rainfall, intense evaporation and limited water resources. The arid nature limits the dryland's water carrying capacity and potential for rural development. Increased demands for food, feed, and fuel (wood) have increased the pressure on existing arable area in these lands and resulted in increased utilisation of marginal lands. Due to high aridity, only thorny and drought-resistant species that grow and regenerate slowly when degraded, thrive in these areas. Consequently, natural dryland ecosystems are easily damaged in areas where human pressure on the land increases.

Livestock rearing and irrigated farming are possible in the arid zones. Rainfed farming is generally practised in semi-arid zones, but is risky due to uncertain rainfall distribution and the threat of drought. Pressure on the natural resources is highest in the semi-arid zone where livestock rearing and rainfed farming compete for land, and towards the water (sub-humid) margins, where population pressure tends to be the highest.
The main processes of soil degradation associated with desertification may be summarised as follows:

Controlling desertification requires environmental management, water and soil management. In most cases, changes in soil properties by direct human influence are far greater than effects induced by direct climate change. When new land is being developed, or land use is being changed, it is important to survey the resources to assess their suitability, thereby reducing the expansion of cropping onto marginal land. Development of new livestock breeds would also improve productivity and reduce pressures on the land, particularly if critical dry-season fallows are re-introduced.


Studies of land degradation processes have resulted in various qualitative and quantitative models which are useful to test scenarios and explore alternatives to current land uses. Uniform databases of the main environmental factors are critical for developing, testing and running these models. Land users and planners may protect soil resources from global change (climate, atmospheric pollution, drought, and erosion) by:

• considering socioeconomic issues that limit the land users ability to remedy land degradation (lack of secure tenure or ownership of the land, limited access to inputs, and possible lack of knowledge and technology to effectively use these inputs).

Experts opine that it could well be that the percentage growth response of natural ecosystems to atmospheric co2 enrichment will be greater than that of managed agricultural systems. Some ecosystem models suggest that plant growth under increased atmospheric co2 concentrations may eventually become nutrient-limited. In future, this can cause these elements to become limiting for plant growth, a problem which may be addressed by larger applications of chemical fertilisers and promotion of integrated plant-nutrition measures in agro-ecosystems.

Human activities in the world's dryland areas is reducing the possibility for sustainable agriculture. It is likely that vegetation-based c -management or miti-gation measures like afforestation or limited tillage cannot fully offset the existing anthropogenic disturbances of the global c cycle. Hence, policies must be developed to arrest the fundamental causes of land degradation and greenhouse gas increases - non-sustainable land use practices and increasing fossil fuel use - which are driven by growing human population and economic development. However, while assessing prospects for combating land degradation in dryland regions, it must be kept in mind that the adopted strategies can only be effective with the willing participation of the rural people of the regions.

N H Batjes is with the International Soil Reference and Information Centre, AJ Wageningen, The Netherlands