Residents of Peera Garhi, a village in outer Delhi, are having to deal with a nightmare. A highly polluting plastics industry is to blame 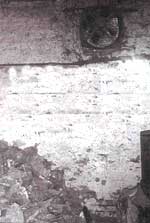 THE students of M C Primary School in village Peera Garhi, north-west of Delhi, have many complaints. Their school is surrounded by smoke-spewing factories, a part of the 500-odd industrial units - 80 Per cent of which deal with polyvinyl chloride (PVC) - in the village. Children, between six and twelve years of age, breathe noxious fumes in every breath. "They (the factories) are killing the children slowly," says Harish Chandra, the school's headmaster.

Bleak. The word sums up Peera Garbi's situation well. Shrouded almost always by dark fumes, the village and its people have no escape from pollution. They live with it every day. "More than 80 per cent of these factories were ordered to be closed in 1996. But they are still operating behind closed doors," says a resident. The factory owners are not very keen on letting visitors in and most of them are usually not available for comments. But there are comments in plenty from the people.

Ajay Singh, a student of the school, complains, "My eyes burn a lot and I get headaches here." Most of his friends in the village are prone to frequent headaches, chest pains and stomachaches, he says.

From inside, the school resembles a fortress. With high walls of the factories towering on either side, its playground is under a perpetual shadow. Exhaust fans from the factories, facing the school, blow fumes throughout the day. "Children faint occasionally," says Munshiram Bharadwaj, senior teacherat the school. Students also allege that industrial waste is sometimes thrown into the school compound.

When the teachers took up the matter with the factory owners, they paid very little attention. "Some have increased the height of the exhaust fans, but this makes no difference," says Bidur Kausik, senior teacher and president of Delhi and Haryana Teachers Front. "Once, students even threw stones at the factories to make them close their vents," the headmaster recounts. Needless to say, it did not work.

The teachers have also sent SOS messages to government authorities. "We have sent letters to the zonal education officer, director of primary education, and also to the Delhi Pollution Control Committee (DPCC). But there was no response. Nobody paid attention," says Kausik. According to him and other teachers, officials from the Central Pollution Control Board (CPCB) visited the school once in 1996. "They installed a few machines for a couple of days to test the air pollution levels. But that was all. Nothing after that," Kausik explains.

M C Primary School is hardly an exception in Peera Garhi. The factories have taken a heavy toll here: constant exposure to toxic fumes have led to a rise in the incidence of tuberculosis (TB), breathing disorders, skin diseases and eye infections. B P Kausik, a medical practitioner here, says he receives at least 10-15 people every day complaining of these problems. While TB and breathing problems are quite common among people above 25 years of age, sore eyes and skin diseases are prevalent among children, Kausik says. "And this is all because of the PVC-based industry. It has polluted the air and water of this place," he says. "Everybody is making a quick buck here without any concern for the environment or the people," says a resident. "Our lives have been cut short by more than half. The cough is very hard to get rid of," complains Subhash, a resident of the village. Like him, his three children also suffer front chronic cough. Sukhbir Singh Shaukin, another Peera Garhi resident, says a lot of the factories here manufacture articles banned by the government. "There are factories burning massive amounts of charcoal and coal-tar. During that time the stench and the fumes are unbearable," he says.

The bylanes of the village are stuffy and claustrophobic. Drains are full of chemicals and effluents. A persistent din from the surrounding factories reverberates throughout the village, the air is thick with the unmistakable smell of burnt plastic. Plastic- the entire village seems buried under it.

The president of the Peera Garhi Manufacturers Association (PGMA), Harbhajan Singh, says that only half of the 500 industrial units are registered.

"When I came here in 1973, it was not like this. There were no roads, no houses. In the early 1980s, industrial units of Karol Bagh shifted towards Jwalapuri. When the Jwalapuri units were closed, all of them came to this place," says Harbhajan Singh. "Earlier people refused to marry their daughters to boys from this village because it was so poor. Now they refuse because of the pollution," says a member of PGMA.

Harbhajan Singh acknowledges that 70-80 per cent of the factories are PVC-based. Most of them either recycle scrapped plastic articles, from poly bags to plastic combs, or manufacture molten plastic cakes and plastic dana (pellets). These pellets are made from PVC resin mixed with other chemicals and recycled articles of plastic.

The method of manufacturing the pellets and plastic cakes are similar: the extruder machine used in the process resembles a juicer. One end has a cone to put in the raw material like poly bags or resin mix. The other end has an outlet with small holes through which threads of molten plastic come out. These then run through a trough of cold water, and solidify into cakes. Needless to say, the process is accompanied by large amounts of vapour and smoke, all of which are released into the environment. Employees work under extremely hazardous conditions. "We produce first-hand plastic. This does not do any harm," says Harish Kumar, supervisor of V K Plastics, adding that the factory does not pollute. However, sacks of PVC resin, barrels of chemicals, chemical-tainted water running out from the factory and the strong, noxious stench in the air tell a different story."

To make matters worse, there is no treatment plant and no waste disposal system. The manufacturers follow a very simple rule: just take it out and burn it in the open. A small clearing, meant to be a children's park, is now used to burn plastic waste. Adjacent to the park is an area that was a pond once. Now the factories burn their waste there.

While the air is bad, water is no less polluted. Effluents are let into the small drains of the village; the chemicals go straight into the ground. Factories producing chemicals bore a pipe several feet into the ground. The pipe carries all the chemical residues from the factory into the ground, not leaving a trace on the surface. "This has severely contaminated the groundwater. The water of this area is yellow now," says a resident. Bidur Kausik agrees that the ground-water is very polluted. He shows a pond filled with dirty water inside a temple. "This pond used to get natural ground-water earlier that was very much usable. But now all that seeps into this pond is filth," he says.

What do the pollution control authorities say? A senior DPCC official says after inspections, they ordered the closure of 12 polluting factories in the school's vicinity on December 31, 1998. Seven of these, he says, were producing plastics. Residents are afraid to complain about Peera Garhi's pollution as the manufacturers' lobby is very strong. Residents fear the factory owners, who are influential Delhi residents and can gather a mob of up to a thousand in minutes. The owners are not afraid of the pollution control authorities either.

If the officials come here, everybody pays a couple of hundred rupees each and the collected amount settles the matter," says a disappointed local resident.