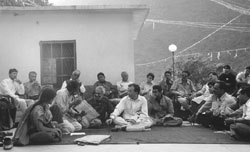 It is most apt that year 2002 -- the International Year of the Mountains -- should see mountain communities coming together to face the challenge of climate change. Himalayan groups together with the Indian Network on Ethics and Climate Change (inecc), a network of individuals and representatives of organisations concerned about climate change, have come out with a position paper on climate change. The forthcoming conference of parties (cop8) on climate change, to be held in New Delhi during October-November 2002, will not find it easy to ignore local community voices this time around.

To record the impressions of local communities about climate change, a two-day workshop was jointly organised by inecc and the Dehradun-based Academy for Mountain Environics (ame) at Rani Chauri on April 28-29. Climate negotiations, such as the United Nations Framework on Climate Change (unfcc), often leave out local communities that would be directly and adversely affected by the change. "Climate change affects the most marginalised communities of the country. It is important for them to know what is being negotiated on their behalf," says Nafisa Goga D'Souza of Laya, a non-governmental organisation (ngo) based in Andhra Pradesh.

Local communities are, for example, worried about the idea of using forests as carbon sinks, and the afforestation drive that follows. The benefits of afforestation, however, go only to the big companies that raise large plantations on leased land. Local communities feel they should be made shareholders and involved in the process of forest management so that big companies do not corner away all resources and money. Another issue that local communities are concerned with is the need for promotion of renewable energy. This is particularly significant for the mountain regions of the country, which have many unelectrified villages with no hopes that grid electricity will reach them for many years to come.

The workshop is a small beginning in the right direction. The focus really is that local communities must be given the space to take charge of their futures.