In Karmadi and surrounding villages the beginning of March is a busy period. This is when ponds and wells in Tumkur district of Karnataka start drying up, midway through the paddy and ragi crops.

This is also the time when some 80 farmers from Karmadi and four other villages get together to clean the underground spring called talaparige in the region. (Tala in Kannada means underground and parige, fountain or fairy.) The spring will nourish their 153 hectares (ha) of crops through the difficult months of March and April, and also provide water for people and cattle.

“From tomorrow, a man from each family getting irrigation water from the talaparige will help in desilting and cleaning the spring’s mouth and the 3-km-long channel,” said Gamkar K C Nagaraju of Karmadi. The title ‘Gamkar’ denotes Nagaraju is the head of the talaparige maintenance team. Water supply will start after puja, he added.

Underground springs were once an integral part of the irrigation system in Tumkur, Chitradurga, Bellary and Koppala districts of Karnataka and in the adjoining Ananthapur district of Andhra Pradesh. People began abandoning them in the 1960s and the ’70s when bore wells became popular. In the past couple of years, however, a non-profit has begun spreading awareness about talapariges among farmers and government officials. The campaign is working and some villages have revived their streams.


Between sand and hard rock

Talapariges are unique to areas having sandy soil and a rocky substratum. They are mostly found in the beds of ponds, streams and rivers; some are around them. While the sandy soil ensures ample water percolates during rains and from water bodies, the rocky substratum prevents the water from percolating too deep. During the summer when rivers and ponds dry up, this water, sweet and purified by filtration through the soil, is still oozing out of the talaparige. 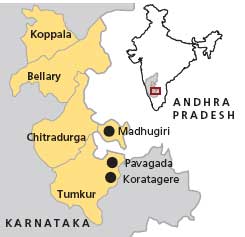 People dig a pit, five to 15 feet deep, at the site of the spring, build a stone wall around it to prevent the water eye— jalada kannu —of the talparige from getting silted, and construct channels along the contours of the surrounding land, providing a gradient for the water to flow. Water from the talaparige is supplied for irrigation to tracts of land near the channels. More crucially, underground springs are a source of drinking water during the summer.

“Before bore wells came along, only land close to a talaparige could grow a second crop,” said farmer Sankaraiyah of Karmadi. “Even today farmers who do not have bore wells can rely on the talaparige to see the crop through.” Sankaraiyah receives an hour of water supply daily for his ragi and paddy crops, each in three hectares, from the underground spring.

A talaparige and its channels are maintained by a community of farmers. The community is headed by a gamkar who calls meetings and initiates maintenance work. A neeraganti coordinates with farmers in distributing water. Water division, as Sankaraiyah showed, is done through a deceptively simple technique of placing rocks at strategic points in the channel to direct the flow. “The position of rocks is changed every hour so that everyone gets water,” said Sankaraiyah, as he carefully packed some rocks at the mouth of one channel, reducing the flow.

In 2007, Mallikarjuna Hosapalya, head of the Tumkur-based non-profit, Dhanya, conducted a survey in the five districts of Karnataka and Andhra Pradesh where underground springs were an integral part of the irrigation system.

Farmers say in the 1950s and the ’60s there were some 2,000 underground springs in Tumkur alone, but the study found 150 in the five districts put together. All but 20-30 per cent of these have fallen into disuse, he said.

“Decline of the talaparige began with the advent of bore wells, which not only depleted the groundwater, destroying springheads, but also destroyed the fabric of social cooperation,” said Mallikarjuna. “In more recent years, mining, especially sand mining in the beds of rivers and ponds, has destroyed many talapariges.” Farmers say frequent monsoon failures and reduced rainfall have also played a role.

One encouraging finding of the study is that a few underground springs, mostly in Koratagere, Madhugiri and Pavagada taluks of Tumkur, are still in good condition, and their water cooperatives active. Karmadi is one of them.

In August 2008, Dhanya held a workshop on saving underground springs at Madhugiri. Many communities expressed eagerness to revive their springs. The first village to take up the challenge was Basavanahalli, where the women campaigned with officials at the district and the division level to get money especially for desilting the channels and the mouth of two underground springs in the village tank. The officials sanctioned an additional Rs 12,000 under the state government’s tank revival scheme Jalasamvardhana Yojana Sangha. Anita Lakshmi, president of the newly constituted tank development cooperative, said 14 ha land, belonging to 35 farmers in the village, has been receiving water from April till the monsoon for the past two years. “For many years our village had seen only one crop. Now we have two crops on 14 ha,” she said.

In Madhugiri town, which is predominantly agricultural, along with the talaparige in the irrigation tank, the old water committee was resurrected. Young Gamkar M B Rangaraju, whose father had served in the post before him, said, “Our tank irrigates 120 ha, but in summers—April and May—we have started supplying water to 12 ha of areca plantations from the talaparige. This is crucial for the plantations.” The committee also imposes a fine of Rs 150 a day on those staying away from maintenance duties.

Following Madhugiri, people have revived 15 more underground springs under the state scheme. Coordinator of the scheme Nagaraja Naik is all for a large-scale revival of the numerous smaller springs. “In Madhugiri and Pavagada, where we have revived such talapariges, people shifted to them for drinking water because the bore well water has high fluoride levels,” Naik said.

Mallikarjuna has also taken up the cause with the district panchayats. Tumkur district panchayat ceo Tulasi Naddineni has sanctioned work for reviving three talapariges under the National Rural Employment Guarantee Act this year. “Our next step is to lobby with the government for reviving talapariges instead of sinking bore wells under drinking water schemes,” said Mallikarjuna. “In areas where people have started drinking the talaparige water, health problems caused by fluoride, like joint pain, are decreasing.”