Harvest time has come and gone but the residents of Sitarampeth village in Chandrapur district did not get a penny in return for protecting nearly 300 ha of reserve forest for over a decade. “No valuation has ever been done of the work done by us,” says Rambhau Dhande, a resident. The forest department has taken away the entire stock of timber without giving the community a share in it. Now the residents keep an eye on the 25 ha of teak plantation raised under JFM. It is ready for thinning. “We would like to fell teak for our own needs, but we dare not for fear of retribution from the department,” says resident Gomaji Naitam. The village of bamboo artisans has nurtured another 25 ha plantation of bamboo and other species but people are not allowed to cut bamboo for their own use.

Jambharla village in Chandrapur too saw its share disappear from right under its nose. “For five years since JFM was introduced in 2002, we worked hard to protect 195 ha of reserve forest. But no returns from the seized timber came our way, in cash or kind,” says JFM committee president Vishwasrao Gedam. “Now nobody is interested in JFM.” 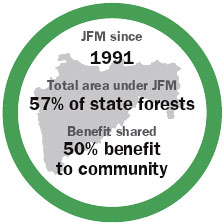 According to the government order, a JFM committee has to be involved in forest protection for at least five years to be eligible for 50 per cent benefits. In case of plantations benefits will be provided after a minimum of 10 years. But many villages allege that the forest department harvests timber before the mandatory five years and denies them benefit. In village Karwan in Mul tehsil, the department felled a patch of forest before five years. “When we asked for an account the officials told us we had no say because five years were yet to be over,” says a resident. In Kargata in Sindewahi tehsil the same trick was adopted. “Our committee was formed in 2000,” says JFM committee member Indira Vethe. “But in 2004 the department felled huge quantities of teak without consulting us or giving us an account.” JFM committee president Devrao Vethe says, “Our microplan documents have been taken away by department officials.”

Despite years of effort, villages have not been able to access records on their share in benefits. Inquiries at the department’s Nagpur and Chandrapur offices reveal the reason: the department has not bothered to compile the records. The flaw is evident in the quarterly JFM reports since all other figures pertaining to the scheme are available in it. Asked for figures of forest produce harvested from JFM forests, conservator of forests, JFM, Anoop Wadhwa, said the records would have to be compiled from data available with circle offices. Asked why separate records were not maintained for a project as important as JFM, Wadhwa said the main aim of the programme is not timber accounts but forest protection. “Department officials should read the government rules,” quips Mohan Hirabai Hiralal, an activist with non-profit Vrikshamitra active in the region. “Benefit sharing is the most crucial inducement for JFM, and if the department is going to deny this, then there is no reason they should expect people to cooperate.”

G R K Rao, chief conservator, Chandrapur circle, admits no monetary returns were ever given to villages under JFM. “The mechanism for sharing benefits has not been finalised by the government yet,” says he. But the government has done one thing; it has reduced community benefits from 50 per cent to 20 per cent in case of dense forests in its 2003 order and introduced procedures and institutional mechanism to favour forest department monopoly. As per the 1992 resolution, the JFM committee was the sole agency responsible for preparing conservation policy, microplan in officialese. In 2003, government changed certain vital clauses, making it necessary that the microplan be in accordance with the prevailing working plan of the forest department. A committee consisting mostly of forest officials was given the power to approve the microplan. Entitlement of JFM committees was limited to the “incremental volume” of the forest area to be calculated by the forest officer concerned.