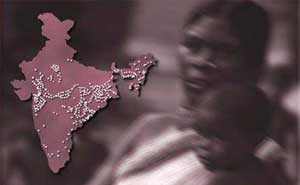 IT COULD well be one of the most exhaustive scientific pursuits undertaken in post-independence India. The All India Coordinated Research Project on Ethnobiology (AICRPE) has unearthed a large spectrum of uses that tribal popuations of the country make of plants and animals.

Home to some of the world's most diverse ecosystems, India has a similar diversity of ethnic groups, characterised by its tribal populations. Bypassed by the march of modern civilisation, some tribal communities still live in rock crevices - in the hunter-gatherer stage :)f human evolution - while others fall n stages further down the evolution path. Termed 'primitive', these communities have long been neglected by the modern age. But after perpetuating severe deforestation and ecosystem damage, modern civilisation is revising its attitude. The linear notion of history and evolution is being questioned. Primitive, for once, is understood differently. Tribal knowledge and ways of life are serious subjects of analysis now.

With India's tribal communities assimilating into mainstream society, their knowledge and practices needed to be documented. In 1976, M S Swaminathan, the then director general of the Indian Council of Agricultural Research, initiated consultations to this effect. A working group under T N Khoshoo, now a research fellow at the Tata Energy Research Institute, drafted a proposal. Consequently, AICRPE was launched in 1982 under the Man and Biosphere programme of the United Nations Economic, Scientific and Cultural Organisation (UNESCO) by the department of science and technology.

AICRPE was transferred to the department of environment when it was created, and later to the ministry of environment and forests (MEF). P Pushpangadan, then at the Regional Research Laboratory of the Council of Scientific and Industrial Research (CSIR) at Jammu, was posted chief coordinator in 1983. AICRPE was to be multi-disciplinary, multi-institutional and action-oriented. The research project took stock of India's tribal panorama.

The project involved as many as 27 institutions from across the country, including the Botanical Survey of India (BSI), the Zoological Survey of India (ZSI), the Central Drugs Research Institute (CDRl), Lucknow, and the Birbal Sahni Institute, Lucknow. More than 400 investigators took part, representing diverse fields such as anthropology, sociology, modern medicine, Ayurveda, botany, zoology, pharmacology and chemistry. After more than 16 years of untiring effort, the exercise concluded in March 1998.

According to the 1991 census, there are 67.8 million tribals in the country. They come from 550 communities and 227 ethnic groups living in more than 5,000 forested villages or in forests. The task was Herculean. The places were mostly inaccessible and the communities spoke 116 different dialects, apart from the known languages. The effort was of seminal importance as the tribal knowledge systems are in the form of oral traditions and are disappearing fast.

The comprehensive database was kept confidential during the project in light of the increasing interest in ethno-biology for commercial uses. It is now available with the MEF for planners to be used for pragmatic development models for the tribals and the country in the first place. It also highlights areas where immediate conservation inputs and studies are needed.
Over 10,000 wild plants used by tribals for varied uses have been recorded. Of these, 8,000 are used for medicinal purposes, with 2,000 new claims warranting scientific scrutiny. As many as 4,000 plant species are used by the tribals for food, with 800 new findings of edible use.

"That means alternate food sources for the future," Pushpangadan told Down To Earth. "The number of edible species are shrinking through time. People used thousands of plants earlier. This has now reduced to a handful, the majority depending on just four species, namely rice, wheat, maize and potato, which are called staple food," he added. This can affect human health as the body needs many specific ingredients according to the ecosystem. Many of the above-mentioned edible species can be restored and many others can be used commercially. These options can give incomes to tribals without damaging the ecosystem.

The tribal populations also use plants for fibre and cord, for fodder and for pesticidal and pisticidal uses. Uses for dyes, resins, perfumes and incense are also wide-spread. With the demand for natural products rising, proper planning can bring rich dividends, said Pushpangadan. The AICRPE team also took stock of the endangered plant species and the reason for their being so. Over-exploitation by tribal people is affecting several plants in the Western Himalaya, the Western Ghats and Andaman and Nicobar Islands.

The study team also found primitive cultivars and wild relative of crop plants being cultivated by tribals in exclusion from the outside world. About 250 such rare cultivars were deposited with the National Bureau of Plant Genetic Resources (NBPGR), New Delhi. Precious gene pools and germplasms of some of these are preserved in various AICRPE centres. Archeo-botanical investigations as part of the AICRPE were undertaken by the Birbal Sahni Institute of Paleobotany, which threw up important findings about the uses of plants in ancient days.


Studying the tribals' use of animals is ethnozoology. The first attempt of its kind in the country, it was carried out for AICRPE mainly by ZSI. The project found that more than 100 animals are used for food. Over-hunting is remains a problem as many of these are threatened. Non-tribals also use tribals to hunt the animals. However, with adequate conservation inputs and captive breeding, many of medicinal uses of animals can be continued without causing any significant harm to their populations.

AICRPE found that 76 animals are used for medicinal purposes. Body parts, such as blood, skin and skeleton, and products such as milk, urine and faeces all have medicinal uses. More than 25 animal products have been short-listed for scientific investigation. The hen's egg had maximum number of uses - 36 applications in various tribal communities. Peacock is another bird with several utilities.


Though there can be differences of opinion, the AICRPE exercise tries to enable the modern world to accept and understand the mystic world of tribals through the medium of modern science. Where a number of "deities and spirits nestle in the old trees and rivers, hills and streams", as the AICRPE report notes. It is a world where one is answerable to the omnipresent and the omnipotent. For most of the tribes the forests are sacred and harm done is punishable.

The tribal healer is also the medium through which they know what is happening. Different tribes use their own theories, like the concept of tijio among the Santhals of central India, which is similar to the modern day concept of 'bacteria'. Among the Kanis of Kerala, the concept of visham explains cause of disease and it they are expelled by steam with medication.

Despite a rich cultural kaleidoscope the plight of tribals in most areas is poor, except in places where forests are still healthy, notes the report. Malnutrition is rampant. Proselytisation to Hinduism and Christianity are also threatening the customs and practices of the tribals, apart from modernisation. Christianisation is severely damaging as the tribal culture is grounded in faith in several gods, which Christianity negates. Their message is that homogenisation is the only means to livelihood security.

The massive database built up ought to help the tribals earn a living and retain the positive attributes of their life. This possibility of that is proved - though not totally - in the case of the herb arogyapacha and the Kani tribals of Kerala. A series of such steps will change the face of tribal India.