Le Corbusier's city is getting a face-lift. A unique programme of the Municipal Corporation, Chandigarh (MCC), is ridding the city of the most difficult component of waste -- debris, commonly known as malba. Malba, when mixed with solid waste, makes both composting and burning difficult. "During construction and renovation a lot of malba is generated, which is disposed of carelessly. To check this, MCC has launched the Malba Collection Scheme... 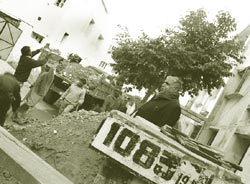 Le Corbusier's city is getting a face-lift. A unique programme of the Municipal Corporation, Chandigarh (mcc), is ridding the city of the most difficult component of waste -- debris, commonly known as malba. Malba, when mixed with solid waste, makes both composting and burning difficult. "During construction and renovation a lot of malba is generated, which is disposed of carelessly. To check this, mcc has launched the Malba Collection Scheme. A separate team is dedicatedly working on it and within 15 days it has received more than 150 calls," informs M P Singh, municipal commissioner, mcc.
As per the new scheme, a mobile helpline number has been provided to the mcc. Residents of Chandigarh city can make a call at the number 3274154 and book their complaint for malba removal. Complaints can also be emailed at bi_mcc@chdut.nic.in.

mcc has vouched that malba will be collected with 48 hours of the complaint. Dumping of malba in front of houses, parks or at any other public space has been banned and any violation will invite a penalty of Rs 500. The residents cannot give this malba to rikshawallas or lorrywallas, and have to compulsorily inform mcc. "We were facing a big problem due to malba, as people were constructing or renovating houses and giving away malba to rikshawallas who would dump it at public places. This practice was defacing the city and creating nuisance. By launching this scheme, we want to inculcate healthy habits among people," says S K Seth, sub-divisional engineer with mcc, who is leading the team that is working on this scheme.

His team consists of 10 people and two trucks. Collection of malba happens between 9 am and 5 pm. mcc has fixed amounts for malba collection. To collect a quantity of malba between zero to 25 cubic feet (cu ft), a charge of Rs 50 is levied. For more than 25 cu ft, Rs 2 per cu ft extra is charged. Singh claims that the rate, which mcc is charging to the residents, is hardly one third of the total cost incurred by the municipality. But the municipality does not mind spending this amount, as its aim is to make citizens conscious of cleanliness and contribute towards keeping their city clean. Citizens need to get out of the nimby (not in my backyard) syndrome, adds Singh. mcc has already identified 18 low-lying areas for dumping of debris.
mcc is extremely happy with the response it is getting from residents. Advertisements have been placed in daily newspapers to generate awareness about the scheme. mcc is receiving 10 calls daily and it tries to collect malba within 24 hours of the complaint. The municipal commissioner is personally monitoring the progress. "Earlier we used to dump malba at open spaces as we did not have any other option. Now we are very happy with the present scheme. Today the mcc truck collected 200 cu ft of malba from our home, within 24 hours of the complaint," says Ravinder Singh, a resident of sector 21-d, Chandigarh. Singh did not mind paying Rs 400 to mcc as service charge because he also wants his city clean. Seth says that sometimes residents hesitate to pay money and ask for discount, but a little bit of 'counselling' and fear of penalty help them fall in line. This scheme has also led to a spin-off advantage. If someone is carrying out construction activity and has not called up the mcc, a neighbour immediately gets on to the phone.

Help is coming from unexpected corners. For instance Krishan Devi, principal of Government High School, Sector 30, contacted mcc and has requested it to dump debris in the backyard of the school, which is a low-lying area. That area can then be levelled and used as playground.

According to rough estimates, debris is hardly one per cent of the total 350 tonnes per day of solid waste generated by Chandigarh. But the nature of debris waste is such that it blocks storm water drains and gives an ugly look to the city. But such a look may now be a thing of the past.