Can India meet the 2012 deadline to provide safe drinking water to all rural homes? 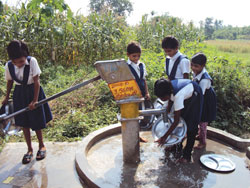 In many Indian villages, women and children spend a large part of the day fetching water over long distances. This is despite the Centre’s policy to provide drinking water to all rural habitations. The government set deadlines for providing 100 per cent drinking water cover to the country’s 1.6 million rural households thrice—1997, 2007 and 2009—but missed them. Worse, habitations “fully covered” by drinking water supply networks slipped to “partially covered” or “uncovered” status.

Rowty village in Madhya Pradesh’s Ratlam district is a case in point. The village did not experience water shortages till the 1970s; three wells, a step well and a seasonal stream took care of their needs. From the late 1980s, the village kept slipping to “uncovered” status every few years despite measures taken by the state’s public health engineering department (PHED). In 1978, the PHED installed public taps connected to the step well; in 1984-85 a check-dam was built on the seasonal stream and an overhead tank constructed to supply water to each household through taps; later, the department built dykes and check-dams to recharge groundwater.

These measures pulled the village back to “covered” status only temporarily. When dry spells recurred, the panchayat demanded water from the Dholavar dam reservoir on the river Jhamand that supplies water to Ratlam city. The scheme to supply water from the reservoir through long-distance pipes was launched in 2006, said K K Bhandari, a PHED engineer. No one knows from where the village with a population of 7,000 will get water if the reservoir fails to sustain supply and the village slips to “uncovered” status again.

The website of the Department of Drinking Water and Sanitation (DDWS) of the Ministry of Rural Development shows the spread of slippage. States have reported varying figures of slippage, the highest being 21 per cent in Haryana (see map). Two million people in India slipped from “fully covered” status to “partially covered” status between 2006 and 2009. What’s more, about 144,000 rural habitations are affected by poor quality water containing harmful contaminants like flourides and nitrates. As on January 2011, about 67,000 habitations did not have drinking water facilities.

Unsustainable practices and illplanned PHED interventions and consequent slippages forced the Centre to modify its Accelerated Rural Water Supply Programme of 1972. In 2009, DDWS renamed the programme—the National Rural Drinking Water Programme—and issued guidelines under it which set 2012 the new deadline for achieving 100 per cent drinking water cover for rural habitations (see ‘What the guidelines say’). The guidelines stress on the sustainability of water source and community participation, which had been absent hitherto. One of the highlights of the guidelines is that it envisages government agencies handing over water supply systems to communities under an exit policy, starting 2012 when the 12th Five-Year Plan begins.

But sources in DDWS said the programme has not even taken off in many states which are yet to implement basic measures like village-level water security plans and village water and sanitation committees (see ‘Missed deadlines’). Water security plans involve calculating present and projected demand and supply, water budgeting and ensuring long term water availability.

The guidelines envisage PHEDs playing the role of facilitator, while the panchayats manage water supply system through village water committees, which would include women and members of deprived castes and tribes. The guidelines have ushered in a paradigm shift—from service delivery mode to adopting a rights-based approach to ensure drinking water security for all. 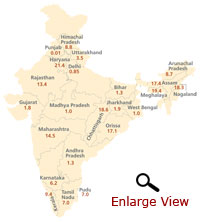 When asked about the non-implementation of the guidelines, secretary of DDWS, Vijay Bhaskar, said that village committees which have to prepare water security plans are still in their infancy. “We are working on setting up block resource centres to operate as nodal implementation agencies and ensure community participation, but it is taking time,” he said. Due to poor implementation of the guidelines, only seven states, including Punjab, Kerala and Meghalaya, have been found eligible for the second instalment of funds under the programme.

Data available with DDWS shows less than one per cent of the 157 million people in rural Uttar Pradesh (UP) own and manage water supply systems and 70 per cent habitations are not covered by any water supply scheme. R M Tripathi, additional director of UP Jal Nigam, said water committees have been formed in all the panchayats but because these were not taken seriously till recently, “village water security plans are still under preparation”. Tripathi said 70 districts have water testing laboratories and these are being upgraded.

In Madhya Pradesh, a number of training workshops have been held for PHED engineers on sustainability of water sources as a step towards implementing the guidelines, said Dhirendra Chawra, consultant with the state PHED. In Bihar, too, institutional mechanisms are still being set up and district water security plans are under preparation.

S N Mishra, a state PHED engineer, said a few rainwater harvesting projects have been undertaken to improve water source sustainability. But these are “insignificantly low”, he conceded. In contrast, the water supply board of Tamil Nadu, has implemented many guidelines, including setting up village water committees; 57 per cent habitations in the state get piped water against the national average of 20 per cent.

A major problem in implementing the guidelines arises from the fact that PHEDs are expected to play the role of facilitators. Community participation, source sustainability and revival of traditional systems are ideas PHEDs don’t seem convinced about. “Community participation has become a popular phrase, but how does one involve community without undertaking capacity building?” asked Mishra of Bihar PHED.

A PHED engineer in Ratlam said there are limits to what the department can do. “I have 600 villages under my jurisdiction. How can I undertake community mobilisation in each of these villages?” he asked. Engineers said politicians often ask them to design schemes overnight, so the projects in the past did not factor in geographical considerations or people’s needs.

The state agencies could take a cue from some non-profits that have successfully implemented drinking water schemes by mobilising village communities, especially women and youth. For instance, women in Didakhedi, Karanjkhera and Rajukhedi villages in Madhya Pradesh’s Sehore district used to walk three kilometres a day to fetch water. Since last year they have been getting piped supply from a communityowned system set up with the help of NGO Samarthan. 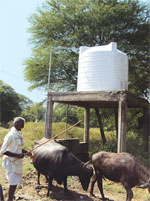 The village water committee maintains the supply network and the accounts. “Since I joined the water committee, I have gained so much knowledge and confidence that I sit in the meetings with officials,” said Jeevan Bai, a resident of Karanjkhera. She said women have become active in gram sabhas, too.

In Kamhar village of Datia district in Madhya Pradesh, youngsters who would have migrated to cities in search of jobs have opted to work for the village welfare after NGO Parhit undertook community mobilisation and introduced rainwater harvesting and water resource management. Raghavan Singh, leader of the village youth group that monitors water quality, said many people are joining their endeavour.

Santoshi Tiwari, programme coordinator with Samarthan, said mobilising the community is of prime importance for a project to be sustainable. “Unless people invest labour, time, money and decision making in an effort, they don’t feel ownership towards it and will not look after it,” she said.

But PHEDs continue to focus on building infrastructure and transferring it to communities without undertaking capacity building to empower water committees. Unless a robust community-managed system is put in place, slippages will recur and deadlines will have to be reset.