The Union ministry of defence is paranoid 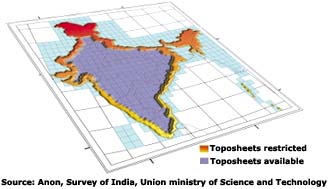 A map of a village in the restricted category, for instance, requires the attestation of an officer of the rank of a joint secretary in the Union government, or a secretary to a state government. A form -- number O.57 (a) -- must first be filled up. Then begins the wait for the ministry to respond.

On top of the form is inscribed a fait accompli: "Maps will, normally, be issued only to the government officials and those of local administrative bodies when required by them for official work." Simply, those not part of the system can almost never access maps.


The restriction comes from the archaic Official Secrets Act, 1923. SoI chief P Nag says distribution of toposheets was brought under the act by the Union ministry of defence (MoD) in 1967. The act bans anyone possessing a map " likely to assist, directly or indirectly, an enemy or which relates to a matter the disclosure of which is likely to affect the sovereignty and integrity of India, the security of the State or friendly relations with foreign States". Similarly for maps other than toposheets. Senior journalist R Ramachandran, who regularly writes on mapping, quotes reputed goelogist S V Srikantia as saying: "Though the country has been geologically surveyed on a 1:50,000 scale, only 72 geological maps have been produced and 23 of these are restricted." (see table: Arbitrary)


In India today, toposheets printed on paper are obsolete, as are the rules governing access to them. Worldover, people now have digital versions of their nations' toposheets. But in India, a toposheet even of the unrestricted area (which you can buy from SOI counters) cannot be digitised without MoD's clearance. In a letter to the government, S Rajgopalan, managing director of Spatial Data Private Limited, Bangalore, noted: "Digital maps of towns, cities, villages at scales of 1: 20,000 or better need clearance from MoD. Since there are no guidelines on what could be mapped, this process is on a case-to-case basis. MoD takes over 18 months to clear a digital map, by which time the city has grown and the map becomes less useful." Further: "Any change in the map has to be cleared by MoD again. For example, a bank might open a new branch. Marking this point on the map, so that it is useful to the end user, is considered an update requiring the clearance process to be gone through once again."

Red tape apart, there also exist confusing stipulations. Rajgopalan says that while one of MoD's letters to his company allows the use of guide maps for tourists on the Internet, another letter says no geo-spatial data (maps) can be hosted on any network including the Internet.

Only nine central government agencies are allowed to digitise SOI maps, including the Geological Survey of India and the National Information Centre. But even these cannot be published without MoD's clearance. And the latter shows no signs of relenting on this coercive monopoly.