Maize is undeniably humanity's greatest, and the first, feat of genetic engineering. But the success story cannot be attributed to modern humans. A recent research shows that it is only due to the selective breeding efforts of ancient Americans that maize today has its huge ears, each packed with firmly attached kernels sumptuously filled with starch, protein and oil. It is these characteristics that made a useless grassy weed, called teosinte, into an edible species... 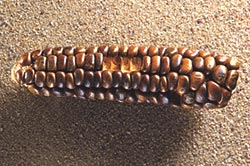 Maize is undeniably humanity's greatest, and the first, feat of genetic engineering. But the success story cannot be attributed to modern humans. A recent research shows that it is only due to the selective breeding efforts of ancient Americans that maize today has its huge ears, each packed with firmly attached kernels sumptuously filled with starch, protein and oil. It is these characteristics that made a useless grassy weed, called teosinte, into an edible species.

The origin of maize has long intrigued geneticists. Molecular methods, evolved in the beginning of the 19th century, enabled the evolutionary sleuths to pinpoint its genesis, but not with certainty. In the 1920s, a group of researchers examined the chromosomes in teosinte-maize hybrids and concluded that the two plants belonged to the same species. That should have resolved the question of maize's origins, but it didn't. In 1938, eminent agricultural geneticist Mangelsdorf proposed that the modern crop evolved from an extinct South American maize species, and teosinte had originated from a cross between maize and another grass Tripsacum . Although cumbersome, this hypothesis was widely accepted. But by the mid-1990s, molecular evidence overwhelmingly favoured the notion that teosinte was the ancestor of maize.

The new study nailed down the genetic changes that enabled the radical transformation of teosinte into contemporary maize. It was conducted by researchers from Germany-based Max Planck-Institute for Evolutionary Anthropology, uk-based University of Oxford and us-based North Carolina State University, University of Wisconsin and the Smithsonian Institution.

To arrive at their conclusion, the researchers studied fossil cobs from the Ocampo caves in northeastern Mexico that are 2,300 to 4,400 years old, and those from the Tularosa cave in New Mexico which are 650 to 1,900 years old. They extracted the cobs' dna and then amplified, cloned and sequenced its fragment. After extensive analysis, they found that ancient Americans systematically enhanced only a few genetic qualities of teosinte to develop maize. Their technique was not as sophisticated as the methods used for biotechnology, but experts say that the effect was the same: plants with improved traits and greater yield.

So when and where was teosinte transformed into maize? To get an answer the researchers constructed family trees of maize-teosinte, using similar dna sequences from different varieties of the two. The results were unequivocal: all contemporary maize varieties belong to a single family, pointing to a single domestication event. Further investigation showed that they arose roughly 9,000 years ago from teosinte of the subspecies parviglumis found in the Balsas river basin of southern Mexico.

Teosinte didn't all of a sudden metamorphose into contemporary maize, the researchers found. Naturally, it was a grassy-like plant with many stems bearing small cobs with kernels sheathed in hard shells. With the help of careful nurturing, farmers caused teosinte to morph into a crop with larger kernels by 5,500 years ago. It took another thousand years to incorporate all of the gene variants found in the modern maize. Analysing backcrossed maize-teosinte hybrids, the researchers came to a startling conclusion: the difference between maize and teosinte could be traced to just three genes. One gene changed the architecture of the crop -- from a plant with many branches to one with a single stalk with a male tassel at the top and female cobs growing along the side.

Another genetic change softened the outer hull on the kernel. As a result, the plant had to survive from generation to generation in a different manner -- before the change, the plant relied on animals to spread its seeds. After the animals ate it, the tough outer shells would allow the kernels to pass unharmed through the gut, and thus get dispersed along with the animal waste. With a softer hull, the kernels could not survive the passage through the gut of the animal. As a result, the plant became dependent on farmers to spread its seeds.

The third gene, the researchers assert, played the most crucial role. It caused the kernels to stick more tightly to the cob. It also modified the starch content of the grain.

The researchers say it is unlikely that all these changes happened naturally. Nina V Fedoroff, a plant geneticist with the us-based Pennsylvania State University, agrees. The early farmers, she asserts, were more sophisticated than what most experts advocate. "The difference between maize and teosinte may be just because of the three genes, but its result is substantial. This can't happen naturally," she concludes. The effect, she says, can be described as a prehistoric Green Revolution. "The study results definitely bolster the argument that genetically modified crops are not dangerous because farmers have been creating them for thousands of years. Therefore, people should not be fearful of the modern modified crops," she asserts.

But critics counter by saying that single genes inserted into different species, as advocated by modern biotechnology, can behave in unpredictable ways. "What researchers are doing with genetic engineering today is crossing species boundaries," says Craig Culp, a spokesperson for the Centre for Food Safety, a us-based pressure group. "That's disturbing, because genes from organisms that wouldn't normally breed could trigger toxins or allergens," he adds. Viviane Jaenicke, the lead researcher of the study, says a comparison cannot be drawn between the breeding practices of ancient Mexican farmers and what biotech companies do. "The farmers did not add any new gene. All the farmers did was to select teosinte plants that carried the 'alleles' they were interested in. And this selection process created maize. So it is not 'engineering' but a selection process," explains Jaenicke, who is a researcher at the Max Planck Institute for Evolutionary Anthropology. According to her, maize agriculture is a prime example of the co-evolution of a plant and its domesticators: the improvement of maize is strongly correlated with the development of cultural complexity and the rise of the Mesoamerican civilizations.

Oral traditions surviving among native Mesoamericans reveal a more humble picture of the origin of the important grain. As per a popular myth, a fox followed an ant and discovered a stash of maize enclosed within a large mountain or boulder; he partakes of the grain and later boasts in front of the other animals about the wondrous new food he has found. In most accounts, the maize trapped within the mountain or boulder is initially accessible to the animals but not to humans; it is eventually released to humans by the divine.