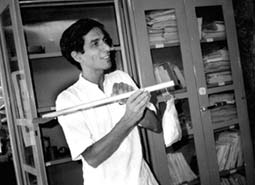 india lives in its villages, said the Mahatma. But sadly very few of our political leaders acknowledge this. And while they look the other way, a few committed individuals have sacrificed the good life to strive for a better living for the rural folk using their knowledge base and information.

Jagdish Lakhiya, Mahendra and Bharti Bhat have chosen to tread the offbeat track. Together they have given shape to Sarvangina Gram Vikas Mandal (sgvm) nearly 22 years ago. Jagdish, a staunch Gandhian, freedom fighter and follower of Vinobha Bhave, is one of the founder members of this public trust. Mahendra, an engineer by profession, too joined in, designing and executing the spartan dome structure that houses the trust set amidst the pristine surroundings of Rampura village, nearly 80 km from Vadodara. Bharti also pitched in, addressing women's issues and problems.

Also known as Prayas, this core group of three, has reached out to nearly 60 surrounding villages, spreading awareness and knowhow on agriculture and the merits of self-sustainability. "Even though the villagers have sound knowledge on basic agricultural practices, they face deeply entrenched social problems," says Jagdishbhai.

"The worst is the caste system," says Bharti. This prevents the poorest of the poor from cultivating their fields, she adds. "They end up tilling someone else's land for a meagre sum. And even if they do have a piece of arable land, they do not have the tools to grow crops," she says. So the sgvm set up tool centres in different villages from where the villagers could rent tools for a nominal sum.

In the early years, the thrust of the sgvm's programme was to provide water to the villagers within the village premises, so as to reduce the number of their trips to the river. sgvm convinced the villagers to pay a token amount to cover costs for laying pipes.

The mandal has also been instrumental in spreading awareness in the field of health, basic education, providing tool kits and seeds and propagating organic farming. Diesel pumps are also loaned to villagers when rainfall is low or in cases where fields are higher than the riverbanks.

Says Bhikabhai of Rampura village, "These people have taught us to take pride in our work and their biggest contribution has been in making the womenfolk independent to a great extent."
A stone's throw away from these fields is Mangrol, a quiet, picturesque village in the midst of which stands a health clinic. Anil and Daksha Patel, founder members of Action Research in Community Health and Development, have set up this clinic to help the rural people get medical help. Having done research in public health in England, this husband-wife team decided to return to India and work in a village. "We chose Mangrol only because a friend of ours was already doing a lot of work here."

"We came here in 1979 and ever since have trained health workers as well as provide medical help to more than 40 villages in the vicinity," he says.

A functional farmhouse-cum-clinic on the banks of the Narmada sees a flurry of activity from morning to noon. An aesthetic yet functional building houses a number of health workers, patients as well as guests who keep streaming in. The day begins early with patients coming from as far as 150 km away.

"The only thing we now regret is the seclusion of the place. Villagers have to change three buses to get here. However, through our health worker training programme we have been able to reach out to far flung villages and provide basic healthcare facilities."

Daksha says, "There is very little literature on basic reproductive and gynaecological problems especially in the local language. We wrote and designed elementary booklets. However, just providing them with books is not enough," says Daksha, "there are a number of social problems that need to be simultaneously addressed."

Even though these two organisations work independently, they often consult each other on various issues and even refer specific problems to each other. They attribute this interaction to a healthy attitude and a strong belief in their own convictions.