Despite being placed second for its sharp accent on resource management, Hyundai has to kickstart initiatives to be in the driver's seat 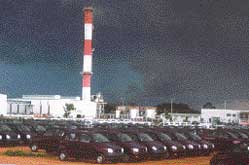 The company comes close on the heels of the other Korean counterpart. Literally. Hyundai made its appearance in 1996 -- exactly two years after Daewoo launched its operations in India. The wholly owned subsidiary of us $8.24 billion Hyundai Motor Company has rolled out a whopping 100,000 cars last year and has plans of doubling its capacity by investing us $410 million.

The company derives its cutting edge from impressive energy and water saving trends to emerge as the runners-up with a score of 60.88 per cent among some fancied names in the sector. Making long strides in the field of cleaner gaseous fuels, Hyundai has shown a greater commitment to the ecodrive by switching to clean gaseous fuels like liquified petroleum gas (lpg) for meeting as much as 22 per cent of its energy demand. Though not a big water guzzler, it is still to make itself self-sufficient as it is completely dependent on groundwater. The company is also gradually weaning itself from paint and primer use, bringing down toxicity levels to a considerable extent. It has made some genuine efforts at keeping a strict vigil on the volatile organic compounds (voc) emissions on one hand and recycling the air from the paint shops on the other. Hyundai nonetheless, need to evolve a system for recycling hazardous waste rather than following the conventional practice of disposing it of.

Similarly, product use is another of Hyundai's stronghold where it has scored 49.33 per cent to occupy the second position after running neck-and-neck with Daewoo. Both its models --Santro in the economy and Accent in the luxury car segment -- have performed well in this phase, which has strengthened the company's overall standing. While Santro, rated the third best car, boasts of high fuel efficiency, good vehicle and engine design, making it the third least polluting vehicle in the segment, Accent lays strong emphasis on emission control equipment. Sadly, the company's performance in product disposal is no better than most and in this parameter, it is placed in the bottom half of the tally. The recyclibility level of vehicles is its only plus point.

The company has recorded average performance in educating the customer on the environmental aspect of the vehicle. As part of its campaign on a transparent information system, it has followed some general practices. The company rolls out maximum number of its vehicles that are petrol based. It has also complied with emission regulation by as much as 79 per cent, with all its vehicles following the Euro ii norms.

However, it badly lags in the area of research and development in India, being heavily dependent on its parent company. It has neither the facility for assessing the impact of fuel or ageing on emissions, nor any drive to introduce vehicles by alternate fuels in the country. Even in other indicators like corporate environmental policy and management systems, Hyundai has gained a reputation it can do without. Its environmental policy focuses only on the production plant and completely ignores the aspect of product development -- an integral issue in an automobile company. In much the same way, its environment department is not a separate entity. Its ems certification is in the very initial stages of formulation and though targets have been set to monitor the performance, the system is weak.

The company has already invested Rs 1,040 crore to develop a full-fledged production facility at Sreeperumbudur, near Chennai. The unit is not just an assembly body but also manufactures some components. Even though the painting and heat treatment aspects are looked after by the company itself, its overall performance in this sphere is marred by its heavy reliability on outside sources. It lacks a coherent procurement policy and has not made any attempt to push it vendors to reduce pollution at their end. This may help in reducing the capital cost needed to set-up a car manufacturing plant but has a huge environmental cost as the suppliers neither have the means nor the intent towards a clean drive.