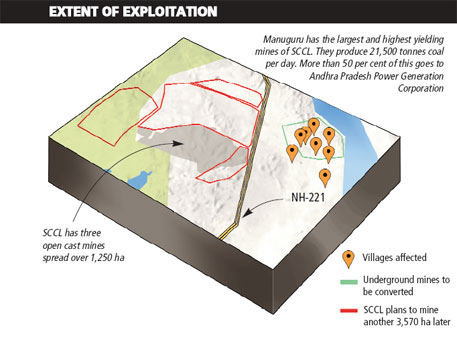 As per the Ministry of Environment and Forests’ environmental clearance letter, four villages, comprising 1,248 households will be affected. These are Padmagudem, Kommangudem, Eggadigudem and Mallepeli. But residents say the conversion will affect four more villages—Annaram, Kondapuram, Anantharam, Kothakondapuram. Forty per cent of the population here are Scheduled Tribe and Scheduled Caste (see ‘People in trouble’). They depend on the forests for their livelihood.
The proposed project will take away 33.5 ha forestland. This will add to the 1,312 ha forestland already acquired by SCCL.

The company has been operating in over 2,186 ha since 1975, when the state government granted it the land on 30 years’ lease. In 2008, the company’s forest clearance for the land was cumulatively renewed, but without people’s consent.

Forest Rights Act (FRA) of 2006 states gram sabha’s nod is mandatory before the grant of forest clearance. “During forestland diversions, consent should be taken from forest-dependent people who may live inside or outside the forest area,” says RAVI REBBAPRAGADA of Samata, non-profit working for tribal rights in the state. He is also a member of the forest rights committee.

The four villages which will be affected as per the ministry were converted to Manuguru municipality in 2005, making it easy for the company to acquire land without taking people’s consent.

Company officials contend, “Only five per cent of the project’s total requirement is forestland. We have the district collector’s certificates which state that his office did not receive any forest rights claims.” 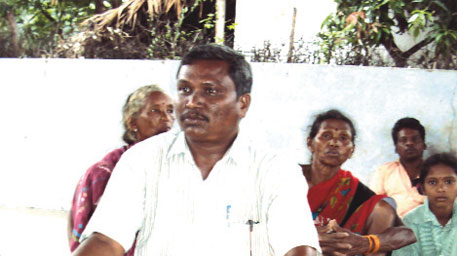 Other residents work in agricultural land in and near forest areas to earn a living. People of Manuguru have also been victims of multiple displacement. About 12 years ago, SCCL displaced tribals of old Kothakondapuram to new Kothakondapuram for its mines.

“If displaced, I do not know what I will do for a living,” sobs Padma Chukuma of Padmagudem.

Clearly, people of Manuguru know how to earn a livelihood only in forest areas. If displaced to plain areas because of SCCL’s expansion plans, their lives will be at risk.