For years, the Amravati Thermal Power Project in Maharashtra has been facing public opposition. Farmers in the Vidarbha region fear the power plant will suck water from the irrigation project in Upper Wardha. On June 17, an unexpected breakthrough appeared.

The state's water resources minister Ajit Pawar met people's representatives, mostly politicians from Amravati, and announced that the thermal plant will not touch the Upper Wardha water; it would recycle and use the sewage generated by Amravati city.

As a sop to the people, the minister also announced that load shedding in the district would end after the project. The announcement evoked a positive response from a section of activists, who were earlier opposing the thermal power project by Sophia Power Company Limited. They called it a victory for farmers. But within days, it turned out that the decision had raised more questions than answers. Protests resumed.

The first phase of the 2,640 MW project, under construction, will require 87 million cubic metre (mcm) of water, whereas Amravati generates 22-24 mcm of sewage. To meet the thermal power plant's requirements, water would also be supplied from Kaundanyapur dam in the district, said MLA Yashomati Thakur at the June meet. Construction of the dam, however, has not yet started, and Sophia, as the project is known, is likely to become operational in September- October.

The minister's decision on sourcing water is a hoodwink, said Someshwar Pusadkar, coordinator of the Sophia Hatao Sangharsha Samiti, which has filed a petition in the Nagpur High Court against the project. Twenty-four million cubic metre of water from the Upper Wardha Irrigation Project is reserved for industry. "Water from the Upper Wardha dam will still be used—the 24 mcm reserved, and probably more," Pusadkar said. He warned using the entire industry quota for Sophia will be counterproductive because it will leave no water for any other industrial unit at the 2,347 hectare (ha) Nandgaonpeth industrial area in Amravati.

Besides water, jobs are also a concern in the industrial belt. When the Maharashtra Industrial Development Corporation acquired land for the industrial area, it displaced 1,178 farmers and promised them jobs, Pusadkar said. He wanted to know how the government would fulfil its promise if Sophia exhausts the water meant for the industrial belt since it is likely to generate only 370 jobs.

The Amravati district has a 235,000- ha irrigation backlog, said Pusadkar. After the project is completed its water needs will cause an irrigation loss of 23,219 ha. "In this situation, water taken from anywhere in the district, be it fresh or waste, will be depriving farmers of irrigation."

People's groups have also scoffed at the assurance of no load-shedding. "Vidarbha produces more electricity than it consumes," said Vivekananda Mathne, coordinator of the Andolan Samiti, a federation of people's organisations opposing thermal power plants in Vidarbha. "We do not need Sophia." Pusadkar added that even if Amravati's sewage were enough to meet Sophia's needs, it is not available as Pawar imagined. There are too many claimants for the city's sewage.

To begin with, Amba nala, the rivulet into which the sewage is released, irrigates some 400 ha in Sukali, Wanarshi, Haturna and other villages in Amravati. There is also a proposal to treat the nala water and supply it back to the city for non-drinking purposes. The municipality has acquired about three hectares for the purpose.

Then there is a controversial dam project that is linked to Amravati's sewage. The 24 mcm sewage from the nala flows into the Pedi river and forms about 40 per cent of its water. This contribution has been used to justify the construction of a `500-crore irrigation project in Lower Pedi. "With Sophia entering the picture, there are now four claimants for the same quantity of waste water," said Mathne. "What sort of planning is this?" 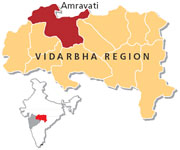 Farmers have been protesting the Lower Pedi dam since 2005. They are against the project because it is intended to irrigate saline land, where irrigation is harmful. With the government's decision now to divert Amba nala's water to Sophia, there is no need for the Lower Pedi project, said farmers from 12 villages who had to vacate their land for the construction of the dam. They have renewed their demand to scrap the Lower Pedi project.

"Why did the government go to such lengths to construct a dam against public opinion especially if it was to sell the water to private parties?" asked Vijay Durge, an oustee from Alangaon village in Amravati.

Advocate Shrikant Khorgade, coordinator of the Pedi Dharan Sangharsha Samiti, added, "The decision has cleverly not specified at what point water from Amba nala will be lifted. It will mostly be taken from the dam. In that case, what will happen to the dam's irrigation promise?"

The Samiti members opposing the Pedi project said they would hold demonstrations, demanding that the dam be scrapped or, at least, its height be lowered so that it submerges less land.

"If you look at the Amravati situation without distortions," said Pusadkar, "the district simply does not have enough water to support a project like Sophia."