Model in a fix

Model in a fix 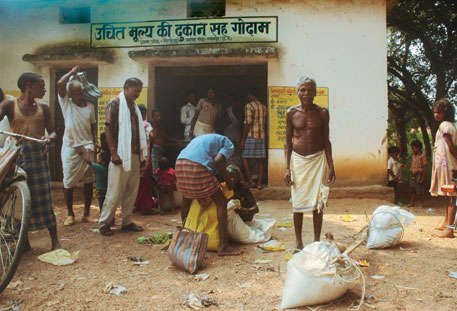 As chhattisgarh prepares for panchayat election at the end of the year, the fate of ration card holders in the state is in limbo. During a verification drive in July-August, the state government found almost 1.3 million “unnecessary” ration cards in the possession of people. These cards have been taken back by the government and people are being refused supplies of daily essentials. No wonder “verification” has become a dreaded word among the beneficiaries of the public distribution scheme (PDS), a largely successful model of food security in the country.

“We had to surrender our cards to the government functionaries during satyapan (verification). While lists available with fair price shops still show our names, we do not get any ration. As a result, we have to buy the same commodities from the open market at `20 per kg, 10 times more than the subsidised rate,” says Basmatiya Devi, a 65-year-old woman from Tirkela village in Chhattisgarh’s Surguja district, where a large number of cards were recalled.

Even before PDS took the form of an Act at the national level, it acquired the status of a political movement in Chhattisgarh. In 2007, Congress leader AjitJogi who took up the poor performance of PDS in his campaign won the Kota Assembly by-election by a huge margin, defeating the candidate of the BharatiyaJanata Party (BJP), which was in power in the state. Alarmed at losing ground to Congress, Chief Minister Raman Singh involved a battery of bureaucrats to reform the food distribution system. In 2012, the administration passed the Chhattisgarh Food Security Act under which foodgrains (rice, wheat andmillet) up to 35 kgs are sold at subsidised rates to families living below the poverty line (BPL) and distributed ration cards so that people could avail the benefits. With this, Chhattisgarh became the only state in India to have its own food security law a year before the National Food Security Act came into existence in September 2013.

With the passing of a national Act, the Chhattisgarh Assembly elections in December 2013 were fought around strengthening food security for the 5.6 million households in the tribal-dominated state. BJP retained power and continued with PDS. It went a step further and created Centralised Online Real-Time Electronic PDS, or COREPDS—a first in India—which allowed beneficiaries portability to buy foodgrains from any fair price shop with the help of a smart ration card (see ‘Is this smart PDS?’). More than five million BPL families in the state have benefited from this scheme.

But its success seems to be short-lived. With corruption creeping into the state’s PDS, hailed as a model by the Supreme Court, and the government scrambling with its management, the robust food security mechanism is crumbling under its own weight.

Thorns in a perfect model

Problems with Chhattisgarh’s famed PDS started with the distribution of ration cards. While official census showed 5.6 million households in the state, more than 7 million ration cards were issued at the start of 2013. The law recognises “household” as a family with a common kitchen, as opposed to the Census definition. When Singh returned to power, he faced the daunting task of managing 7 million beneficiaries of PDS.

According to Rajiv Jaiswal, director for PDS in Chhattisgarh, the government received many complaints about bogus ration cards from the gram panchayats and municipal councils. “There was a sudden surge in the number of BPL households, bringing down all the indicators of growth. So we felt the need to verify it,” he says. The result: 1.3 million fake ration cards were identified, which were recalled by the government. Towards the end of August, municipal and government offices in the state were flooded with applications of more than 0.3 million PDS beneficiaries, requesting the government not to recall their cards.

UmeshBaghel works as a cobbler in Sanjay Nagar locality of Raipur. He has to support a family of five. Umesh was told by the surveyors that he was put in the Above Poverty Line (APL) list. He does not understand why he was put in the APL category when he barely makes `40 a day. He now relies on his sister Lata to bring him ration. “His wife works as a domestic help and earns barely `2,000 a month while he earns `40 a day. Which category should he be in?” asks Lata.

Patrosh and Mary Karketta of Tirkela have similar woes. Their ration card was cancelled on the ground that their son works in the Indian Army and, hence, they do not fall in the BPL category. Without the ration card, the couple has been buying essential supplies from the open market for the past four months. Gangaram Praikra, a state-level coordinator for the Right To Food campaign working with the non-profit Chaupal, says that ration cards of older couples or single parents were recalled in many places when it was found that their children were employed in government jobs.

Before things took an ugly turn, Chhattisgarh’s food security framework under PDS was working well. A study by the Indian Institute of Technology-Delhi earlier this year found that 63 per cent of the deliveries to fair price shops from the state’s warehouses were made within a week’s time from the day the demand was made to replenish the stocks. Estimates prepared by the state government show that the number of trips made by a beneficiary to a fair price shop was reduced to two compared to 4-5 times prior to the adoption of COREPDS. Meanwhile, the commission for the owners of fair price shops was increased from 10 per cent to 25 per cent of the total sales, while extending interest-free credit facilities to the beneficiaries. After the verification drive, portability of the smart ration cards was suspended, says SangeetaSahu, coordinator for the Right to Food campaign in the capital city Raipur.

At Tirkela village, fair price shop owner Narmada Yadav refers to a list from August while handing out foodgrains. He does not have an updated list. According to Praikra of the non-profit Chaupal, ration cards of 16 families in the village were cancelled during verification. While the survey in urban areas was conducted by food inspectors, in rural areas it was the panchayat secretary and a government school teacher. Praikra says any decision to cancel ration card has to be taken up in the gram sabha (village council). “Under Chhattisgarh’s Food Security Act, every village is supposed to have a monitoring committee for PDS. But these procedures were hardly followed during the verification drive,” he adds.

When this correspondent asked the panchayat secretary, Lakhan Singh, on why so many ration cards were cancelled, he did not explain the logic. “We have conducted verification according to the rules laid down by the government. No outsider has any business to question our decision,” he replied. On the other hand, Gopal Tirkey, the school teacher involved in the drive, admits that the ration cards were cancelled in an unfair manner.

Village residents are protesting. They have accused Lakhan Singh of hiding details about his own family. “His mother has a separate BPL card while he holds the position of the panchayat secretary. Even his mother’s card should be cancelled,” says sarpanch Hardeo Tirkey. The government, meanwhile, is unclear on the status of the ration cards that have been recalled and is under the impression that beneficiaries are still availing subsidised foodgrains. “Since every fair price shop dealer gets a list of the beneficiary allotted to him, he looks at the list, keeps a record and gives foodgrains,” says a government food inspector.

Contrary to what the government believes, some PDS dealers have used the opportunity to hoard foodgrains. While the ration cards of 16 families in Tirkela were recalled, their names appeared in the list available with Yadav, the sole fair price shop owner in the area. These families have accused Yadav of pilfering their share of ration and have also written to the food inspector to cancel his licence. They allege that Yadav refuses to show the list on the basis of which he has been selling subsidised foodgrains.

Dilemma for paddy farmers too

Rice being a staple in Chhattisgarh, the mess in PDS has also affected paddy farmers. At the same time when the government was conducting verification of ration cards, the Centre put a cap of 1.6 million tonnes on paddy procurement from the state, causing unrest among 1.1 million farmers who depend on paddy cultivation. In order to have a good supply of rice, the state government fixed the minimum support price (MSP) at `300 per quintal, much higher than the MSP of any of the neighbouring states. This worked well for PDS but the Centre’s withdrawal of the bonus in August put an additional burden of `7,000 crore on the state’s budget. The Centre also declared that it will only buy paddy for the national PDS pool, indicating that the state has to procure paddy on its own. Recently, the state government postponed the date of procurement of paddy from November 1 to December 1. This further agitated the farmers as they now have to look for alternatives to store the harvested paddy.

According to Samir Garg, member of the Supreme Court Committee on Food, with municipal and panchayat polls in the state slated for December-January 2015, the Raman Singh administration is in a dilemma on how to right the wrongs in the state’s PDS. “We do not believe 1.3 million ration cards were bogus. Also, for paddy procurement, only 1.1 million farmers contribute to PDS, while there are 4.2 million farmers in the state. Giving a subsidy of `300 per quintal to one-third of the farmers in the state while depriving 1.3 million beneficiaries from securing essential foodgrains is not a judicious decision,” says Garg.

With local elections round the corner and demands from the Opposition to not bow down before the Centre and to keep procuring paddy, the real test for Chhattisgarh’s PDS begins now. The state government seems to be buckling under pressure. It has not welcomed a new proposal to include edible oil among the essential commodities given under PDS, Garg says. Can the government restore the lost sheen to a food security mechanism that was once cited as a model for others?