A revolutionary system of trade, the LETSystem, helps communities meet their requirements without depending on hard cash 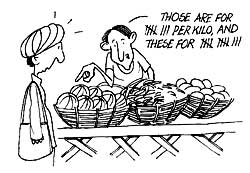 imagine this terrifying scenario - the industrial town of Jamshedpur, which is home to Tata Iron and Steel Co Ltd, India's pioneering steel plant, suddenly goes bankrupt and declares a lockout. Because, a more efficient South Korean company based in Vijaywada has forced the inefficient Tata management out of the market. Not an unexpected prospect in a global economy, but now, unemployment and poverty and desolation are writ large on the faces of the local workers and their families. Money to grease the local economy is in short supply. What does the future hold? Will it mean the end of their livelihoods?

The local barber cannot find clients, nor can the local shopkeeper sell his stock of eggs. In a globalised economy which will increase competetion, such situations can increase. Competetions can force companies to close down or they can themselves relocate to take competetive advantage.In both cases, the local community will find its economy shattered because there will be loss of jobs and hence, shortage of liquid cash to keep local economic transactions going.

A similar situation occurred recently in the Comox Valley area of British Columbia, western Canada. But the region's people, instead of losing all hope, devised an innovative form of community-based trade known as the lets ystem, which does away with the concept of money. The name lets ystem was culled from the first person English word 'Lets', implying a collective effort by people.

The simple innovation was to keep local production and skills in operation by creating a community register of economic transactions in which each member of the community has an account. Ram can then ask the local cowherd, Krishna, to give him five points worth of milk. The register will record the transaction by crediting five points to Krishna and debiting five to Ram. Ram, in turn, a good teacher, can give tuitions to the son of the local grocer, Samar, and charge 20 points. The register will reflect this transaction, too. Krishna, meanwhile, with the five points he had earned from Ram, can go to Rahul, the barber for a haircut. In this manner, local economic activity goes on without the need for money from the government mint - one human need is traded for another one to keep the local economy going.

The small town's example has paved the path for a parallel economy to flourish within the realm of international finance; and the beneficiaries are not big multinationals or businesses, but people from remote and diverse parts of the world. Observes Michael Linton who designed the letsystem, "When the local economy (of Comox Valley) dried out, we saw that real goods and services were still available and the needs still present. We sought to coordinate this through devising a barter exchange - list of offers and requests - with the initial idea of direct exchange... and arrived at the letsystem." The system, which is now being adopted by different communities in New Zealand, Australia and Ireland among others, takes a massive swipe at the prevailing belief that world finance revolves around the concept of hard cash. Liberalisation, a holy word in the scheme of developing states, stands scorned. Having opened the doors of nations to foreign investment, it has only fanned the flames of inequitable distribution of wealth. As Richard Douthwaite, in his recently published book Short Circuit , which focuses on the role of local currencies in the world economy states, "Communities can no longer rely on the world economy for their incomes and the essentials of life any longer, as there is a serious risk that it will break down." On the other hand, the letsystem develops within a community, a sense of self-sufficiency and economic independence outside the world market.
lets radically differs from traditional currency models known as scrips. These models are often based on the national currency, in which a limited amount of money is circulated by a central institution like a national bank and tends to become unevenly distributed between the haves and have-nots.

On the other hand, the letsystem could be a 'tally system' - an ancient form of trading where each transaction results in a tally being placed on a person's account and this could either be positive or negative. Each user has his or her own 'tally stick' or 'score sheet' and people mark off each other when they trade. Other methods of keeping accounts are appointing someone who enjoys the trust of the community as book-keeper or by hanging a chart or scoreboard in the village centre. While most successful letsystems have had less than 1,500 participants, a system of trading between individual systems known as multi lets has been identified as having the potential to expand the concept on a broader level. Such a system helps people access commodities from a larger region without the need for money. Each person could be keeping accounts in perhaps five or 10 letsystems, say the neighbourhood, local, regional, club, church, professional, hobby, political or personal networks. Linton believes that the Internet will attain importance as a 'clearing house' for transactions.

Describing the impact of one of the best letsystems of Ireland, in Castletownbere in Kerry county, Douthwaite says, "Its effect has been to establish a strong social support network between people and enable them to do things which they would not otherwise have been able to afford. They have also been able to buy food and clothes through the system." His book relates how communities can use local currencies and banking systems to create a financial micro-climate in which a lot more local production for local use becomes possible than would be the case if the community restricted itself to doing only those things which are profitable at world market prices. This micro-climate ought to enable communities to produce all their own power and food on a sustainable basis.

At present, there are about 1,000 letsystems in operation worldwide. Many letsystems were introduced in New Zealand during a period of economic difficulty in the mid '80s. These were later used as a model by Australia, where the system enjoys considerable governmental support. Some country-wise figures for the number of letsystems in operation are: New Zealand, 70 systems; Australia, 200; Britain, 400 and France, 100.

Although letsystems can function quite well using their own unit of exchange for all dealings, governments require that taxes be paid on commercial transactions in national currency. This is the reason why letsystem transactions are partly carried out in the national currency and partly in the lets unit of currency. The decision as to the proportion of each currency used can be made by the individual actually involved in the deals or else a letsystem could make its own policy. Despite the pressure of having to conform in this fashion, the success achieved by many letsystems in getting communities 'back to work' is unquestionable. It has definitely given those groups for whom the global trading system has displayed little concern, the confidence that effective local action can be taken.

letsystem can also be adapted to communities of the Third World. In many developing countries, people who were previously self-sufficient now find themselves compelled to produce food for export. Not just this but they pay dearly for commodities that come in from the outside world for meeting their needs. Although the letsystem may not offer a complete solution for the problem it could stimulate the local economy. Money could continue to help people acquire goods and services not available within the community. However, a good letsystem is ideally one that reduces the need for such items.

Philip Carter is a freelance journalist based in Canada.