Water on a deficit budget 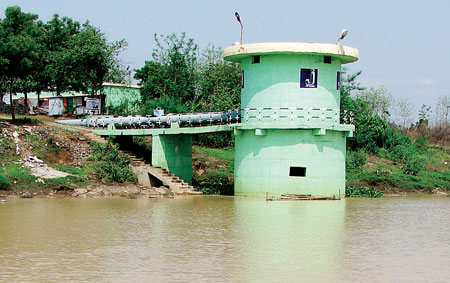 Of the 118 proposed projects, for which data is available, 33 plan to withdraw water from the Mahanadi, Chhattisgarh's main river. The water requirement of projects withdrawing water from the river stands at 1,500 mcm per year. If the water requirement of projects withdrawing from its tributaries—Lilagarh, Hasdeo and Seonath—are added, the withdrawal jumps to 2,700 mcm.

Say, the water withdrawal of the existing industries is 1,000 mcm, total withdrawal from the Mahanadi would go up to 3,700 mcm. Thermal power plants, known to guzzle water, would be withdrawing close to 1,500 mcm every year. The estimate is based on data of just a fragment of the projects planned. The dependable water availability in the Mahanadi (measured at Kasdol, Raipur; it lies upstream of Raipur) over the last 10 years is an average 1,528 mcm annually, according to state Water Resource Department. With industry set to withdraw 3,700 mcm, water budgeting in the state will clearly be highly deficit. Even industry won't be able to obtain water as proposed. This will lead to further groundwater exploitation, worsening the condition of the already depleting water table. 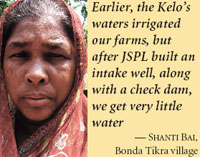 "There was a time when we would get water on digging a few feet. Now, with rampant exploitation, we are unable to get water even at 100 feet (30 m)," said Vidhan Mishra, former industries minister of Chhattisgarh. He explained the industries withdraw groundwater without the requisite permission. In order to withdraw to the maximum, companies use 10-inch (25 cm) bore pipes instead of the statutory 6-inch (15 cm) ones.

"During summers, it is common not to allow people to use river water. This is to ensure water availability for industries," Bandyopadhyay said. The water department estimates the available volume of water at Kasdol, has varied between 3,000 mcm and 10,000 mcm over the last 10 years. In 2002-03 the volume dipped to 1,528 mcm. "That was a drought year," said state water resource secretary C K Khaitan, and added: "We have ample water, what we lack is retention capacity." The government is building about 600 anicuts across rivers in the state that would store 400 mcm of water. But these will benefit industry not villagers, said Bandyopadhyay.

Health worker Shanti Bai of village Bonda Tikra also believes the government is focussed on industry's water needs. Her village is on the banks of the Kelo, a tributary of Mahanadi, in Raigarh. "Earlier the Kelo irrigated our farms, but after JSPL built an intake well and a check dam, we get very little water." Agriculture in the village is on the decline, she said; most of the villagers are now contract labourers.

In protest against JSPL's dam and well, people went on a hunger strike in 1998. Satyabhama, who spearheaded the strike, lost her life after fasting for seven days.

The check dam and the intake well still stand in the Kelo.