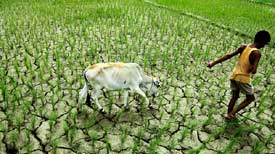 Monsoon usually reaches Assam by June 1, and by June 5 it covers whole of northeast India. "But the disturbance in the orientation of its trough has meant that the monsoon did not reach the region at its usual time," Pathak explained. He added that deforestation and ecological disturbances also had some part in the rainfall deficiency.

Meteorologists also say that the weather in northeast India is influenced by developments in Tibet and, southeast Asia and the West Pacific region. So, abnormal movements of typhoons over the South China Sea this year have some role in the rainfall shortfall in Assam, they surmise.


Rain deficiency is not totally a new phenomenon in Assam. In 1971, rains fell short by about 25 per cent, according to the state's meteorological office. Assam also has had 12 years of below-normal rainfall since 1982. Last year, there was a rainfall deficit of around 8 per cent, though the state still experienced floods. But a 40 per cent deficiency is quite unprecedented. The shortfall has been the maximum in Nagaon and Sonitpur districts (See chart Parched Assam).

The rain shortage has hit the state's agriculture hard. The season is the peak time for paddy cultivation. But with the rains playing truant, kharif season productivity has dipped catastrophically.

"Foodgrain production, last year, was around 1600 kg/hectare (ha), but this year it's very likely to be less than 1400 kg/ha. Much land in the state was left unutilised land due to water shortage," says K Sen, joint director in the state's agriculture department. In Nalbari district, over 60 per cent of cultivable land remained barren. According to reports from the state's agriculture department, the district is likely to lose over Rs 45 crore from loss of production.

"No one had informed us about the drought or the delay in monsoon. By the time we came to know about the drought, it was too late," says Bipin Baishya, a small farmer from Bhatkushi village in Nalbari.


Alaka Desai Sarma, member of the Assam legislative assembly from Nalbari, says the situation could have been controlled had the authorities been a little more vigilant. Others like her argue that the problem could have been contained if Assam had a functional irrigation department. They have a point. Farmers in Nalbari depend exclusively on rains and floodwater for irrigation. So, the district was hit the most even though its rainfall deficiency was much less compared to other districts. Nalbari has hardly any tubewells.

The state's agriculture department has been far more candid in admitting that it's been caught off guard. Assam's agriculture minister, Promila Brahma, for example, confessed, "The weather experts did not inform us well in advance about the possibility of a drought. Now all that we can do is to ensure a good rabi crop." P Kalita, Assam's agriculture director, however, doesn't think that this would help matters. "We will take special measures to ensure that farmers reap a rich harvest in the rabi season. But it won't be possible for us to make up for losses suffered in the kharif season," he says.

Sarma also warns of an impending fodder shortage in the state. "No one is paying attention to that problem," she says. For sure, the state's agriculture department has a tough problem at hand. And all its candour notwithstanding, the department's approach has been very ham-handed. For example, the department has recently announced that it will deploy tractors in drought-affected land during the rabi season, but its Nalbari wing has no tractors at all. It also doesn't help that Nalbari has no agricultural officer. The last incumbent, Hemkanta Sarma, was suspended when the drought took a severe turn.


The situation has been exacerbated by the fact that most paddy farmers in the state are small-scale operators, who have little to fall back upon in case of crop failure. Saminur Ali, a farmer from Udiyana village in Nalbari has not been able to cultivate his 2 acre (about 0.9 ha) farmland. "We hear everyday that the government is giving special benefits to the drought-hit farmers, but we have not got any till date," he laments.

The government recently announced that it will distribute black gram seeds among farmers, which they can sow and sell. But this is expecting too much of a drought-struck lot, who in any case are not versed with commercial ideas. "What will we do with black gram, we need wheat so that there is food to eat," said a farmer.

The discontent of many like him has also come out in the open with the Asom Rajyik Krishak Sabha staging demonstrations outside the state's agriculture department. This association of Assam's agriculturists has threatened that scores of farmers will commit suicide, if the government does not take steps to improve matters. The association has also demanded that the state ensures food security to the drought-hit and guarantee jobs to agricultural labourers.

The farmers are not the only ones worried. Many fear that a rise in prices of essential commodities is imminent. In fact, the price of rice has already soared. In the first week of August, rice was priced at Rs 1,100 per quintal but towards the end of August the price increased to Rs 1,400 per quintal.

The drought-related problem of small-scale cottage industries has gone virtually unnoticed. These units are wholly dependent on foodgrains. Rinku Mahanta of Nalbari district, who runs a small-scale cottage industry, Asomiya Jalpan, is among those worried. Asomiya Jalpan produces Assamese delicacies, all of which are made from glutomonus rice. She had involved local farmers to cultivate this rice variety. But the land of the farmers involved in the project was hit by the drought. Rinku used to manage a monthly profit ranging from Rs 10,000 to Rs 12,000 but now fears that her earnings might go down sharply. "If glutomonus rice fails in the state, I may even have to close my unit," she says. She has requested the state's agriculture department for assistance but has not received any.

"Assam's drought-related problems are more severe because of the ham-handed way, departments function here," says Hiren Gohain, a leading intellectual of the state. "The government waited for the rains and then proceeded on its relief plans without any scientific study," he adds.

The drought, it seems, doesn't figure high in the agenda of the state government's officials. Curently, they seem more taken up with the coming Durga puja holidays.